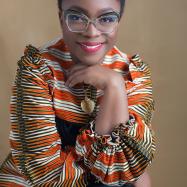 As the head of myWHY Agency, Emerald-Jane Hunter is a force to be reckoned with. A four-time Emmy Award-winning producer and a master of all things media, storytelling and content creation, EJ has a background of 15 years working in TV and is now making a splash in the world of integrated marketing.

Born in Ghana, West Africa, she relocated to the US at the age of 19 and received her B.A. in Communications at Luther College in Iowa.  In 2003 she moved to Chicago where she discovered her “WHY” was storytelling via television. From reality TV to live events, showrunning to talent booking EJ has done it all. She is an Emmy-Award winning Producer who’s Hollywood connection runs deep. EJ has brought Hollywood to Chicago numerous times through her many high-quality bookings, including stars such as Jennifer Hudson, Common, Cindy Crawford, Tony Goldwyn, Ne-Yo, Mike Tyson, Jane Lynch, Martha Stewart, Larry King, Cody Simpson, Sting, Boys II Men and Barry Manilow—to name just a few.

Now as president of her own agency, EJ is finally living (and basking) in her WHY. She’s most fulfilled working with entrepreneurially minded brands and companies, managing strategic communications and crafting integrated marketing campaigns aimed at further elevating and amplifying brand voices—and, of course, telling compelling, inspiring stories.

6 steps for getting started with corporate social responsibility
Jul 21, 2021
CSR is critical for all businesses now; consumers have come to expect it. Here's what you can do for your company.

How to embrace corporate social responsibility as an essential part of your business
Jul 21, 2021
This is the year of holding businesses accountable.

2020: The year of digital, change and silver linings
Dec 01, 2020
Here's a few important tips for brands looking to embrace today's online activations and connect with consumers through them.

3 principles businesses can practice to promote diversity, equity and inclusion
Oct 20, 2020
Commitment to these principles will ensure BIPOC employees have the opportunity to grow and thrive within a company.

How can back-to-school brands keep up in the COVID-19 landscape?
Sep 02, 2020
A widespread shift to at-home learning makes online offerings especially important.