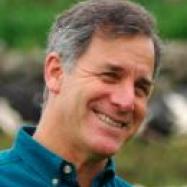 Gary Hirshberg is the husband of writer Meg Hirshberg and the father of three yogurt eaters. He is chairman of Stonyfield Farm, the world’s leading organic yogurt producer, and the author of Stirring It Up: How to Make Money and Save the World (Hyperion, 2008). Gary frequently speaks on topics including sustainability, organic agriculture and the profitability of green business.

Gary has overseen Stonyfield’s growth, from its 1983 infancy as a seven-cow organic farming school to its current $360 million in annual sales. Stonyfield has enjoyed a compounded annual growth rate of over 23 percent over 21 years, by consistently producing superior products and using innovative marketing that blends the company’s social, environmental, and financial missions. Stonyfield partnered with Danone in 2001, and Gary is now managing director of Stonyfield Europe, with organic brands in Ireland, and France.

Gary serves on several corporate and non-profit boards including Applegate Farms, Honest Tea, Peak Organic Brewing, Late July, The Full Yield, SweetGreen, RAMp Sports, Glenisk, the Danone Communities Fund and the Danone Livelihoods Fund. He is the chairman, CEO and co-founder of Chelsea’s Table Cafés, a natural and organic fast casual restaurant firm. In 2011, President Obama appointed Gary to serve on the Advisory Committee for Trade Policy and Negotiations. He is a co-chair of AGree, an agricultural policy initiative formed by the Ford, Gates, Kellogg, Rockefeller, Walton and other leading foundations.

He is chairman and a founding partner of Just Label It, We Have the Right to Know, the national campaign to label genetically engineered foods and is co-author of Label It Now – What You Need to Know About Genetically Engineered Foods (New Word City, 2012). All proceeds from the e-book benefit Just Label It.

8 key business learnings from growing Stonyfield Farm to what it is today
Apr 16, 2019
Starting an organic food company looked a lot different in the early 1980s. Here are some of the lessons I learned along the way.

We need to support OTA's lawsuit against USDA in support of the organic animal welfare rule
Oct 16, 2017
Maintaining the integrity of the USDA Organic seal requires constant vigilance—and that includes enacting widely agreed upon stricter animal welfare standards, says the cofounder and chairman of Stonyfield Farm.

Why the time is right for a national organic check-off
Feb 27, 2015
Funds from a check-off could help the organic sector strengthen its voice, quell consumer confusion and address supply shortages.