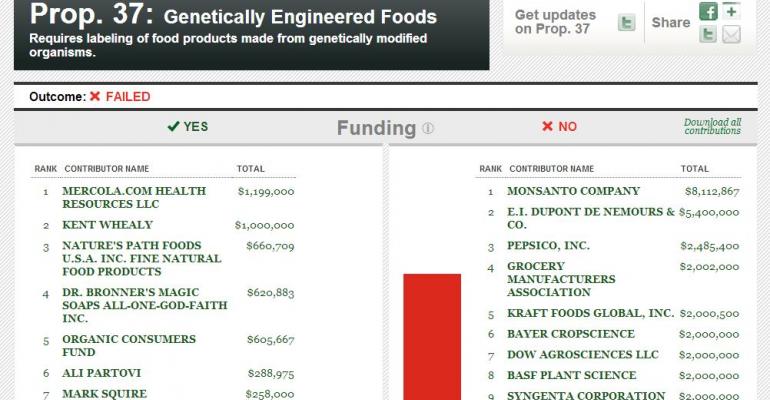 In case you missed the press release, California did not vote for mandatory labeling of genetically modified food. The ballot initiative slipped precipitously in polls leading up to the vote as opposition commercials hit the airwaves en masse. The final fundraising tally is a bit of a joke, with corporate interests from biotechnology and conventional food raising in excess of $46 million compared to approximately $9 million from organic advocates and everyday folk. This comes as no surprise, while the final vote—47% for labeling versus 53% opposed—is both expected and unexpected to me. It's closer than I thought, but a loss is still a loss.

1. Consumers do prefer natural food, but they don't particularly care right now about what that means. Whether this apathy manifests in the rampant abuse of natural product claims or our dogged lack of transparency concerning GM ingredients, mainstream consumers will vote for natural in polls but not on ballots, and only at the shelf if the price is right.

2. You really can buy the vote in America, at least on the rough and tumble terrain of state politics. Whether you view the opposition's messaging as consumer education or a nefarious disinformation campaign, the fact remains that $46 million in organized advertising tabled this initiative. In this light, food reformists need concern themselves much more with campaign finance reform and the mechanisms of politics than they ever have in the past. You could even argue that there is no true food reform without political reform first.

3. Most of the leadership in natural & organic food did not step up to the plate for this initiative. For whatever reason—imprecise language, litigation exposure, economic pressure—only a small handful of companies contributed meaningful levels to this particular cause. Spotlight on Nature's Path, Dr. Bronner's and Lundberg Family Farms for giving until it hurt.

4. This is not a death blow for the non-GMO movement, but let's be honest. It's serious. California was the state to make this happen, and now it serves as a very public proxy for the country's lack of conviction around this topic. If I was in the business of agitating for GM labeling, I would now focus the lion's share of my efforts and resources on Just Label It at the national level.

5. What exactly did that $46 million buy the companies who spent it? Time, and time alone. Given the escalating awareness surrounding this issue, the global call for labeling in most developed countries, and the relentless drive for transparency across industries but especially in food, the prospect of unlabeled GM food in America is increasingly remote. Another few years of it, however, makes that $46 million money well spent.