HomeArchiveAre aquaponic farms the key to saving our oceans?
Recent
Latest
4 tips to get ahead of chemical concerns in packaging
May 20, 2022
7 CBD favorites in the increasingly popular gummies format
May 20, 2022
Mission MightyMe helps parents introduce allergens to babies
May 20, 2022
UNFI's Eric Dorne to step down as chief operating officer
May 20, 2022
Trending
Whole Foods' honors 30 companies with 10th annual Supplier Awards
May 18, 2022
Getting ready for 2023: Trends for brands to consider
May 17, 2022
Sponsored Content
The rise of sustainable business – eGuide
Sponsored Content
Unboxed: 7 plant-forward ice creams to stock this summer
May 10, 2022
New Hope 360 Blog
brought to you by

Are aquaponic farms the key to saving our oceans?

This past May I had the pleasure of accompanying a chef to the largest fish market in the country, New York City’s Fulton Fish Market at Hunts Point. We were on a mission to buy enough seafood for her restaurant to last the week.

I left my then-home in Connecticut at a ridiculous time (read: did not sleep a wink) to arrive at the market by 3 a.m. Despite the early hour, the huge refrigerator of a warehouse was bustling. Mini-forklifts whizzed from crate to fish-and-ice packed crate, splashing puddles of foul water over my feet. I soon realized that my sneakers were a poor choice of footwear. 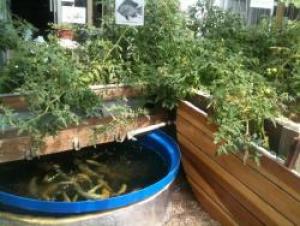 Hardened men in rubber overalls bartered with buyers. But what surprised me the most from this experience was not the vast variety of fish available, nor was it the pungent stench that seemed to linger in my hair despite the numerous showers I took in the following days. It was the sheer abundance of seafood that was caught, shipped and sold every single weeknight. That’s right folks, millions of pounds of seafood are handled on a daily basis at this one location.

A recent article in Time magazine entitled “End of the Line”, explores the effects of our continued dependence on wild-caught fish. The piece explains, “The U.N. reports that 32% of global fish stocks are overexploited or depleted and as much as 90% of large species like tuna and marlin have been fished out in the past half-century. Once-plentiful species like Atlantic cod have been fished to near oblivion, and delicacies like bluefin tuna are on an arc toward extinction.”

Fish is healthy for humans to eat though, offering lean protein and heart-healthy omega-3 fatty acids. What’s more, the Time article states that the U.S. government just boosted the recommended consumption of seafood to 8 oz. or more a week in its new dietary guidelines. But how to keep up with fish demands while preserving the delicate biology of the ocean?

Aquaponics may be the answer. In an effort to understand the mechanisms behind the sustainable growing practice, and the difference between the often rebuked aquaculture, I went to Tawnya Sawyer, co-owner of Colorado Aquaponics based in Arvada, CO. “Farmed fish often get a bad reputation because some farms crowd the fish so intensely that they wind up having disease issues, and then need to use antibiotics. There is also a lot of nitrogen waste that goes into lakes and waterways, causing ecological damage.”

Not so with aquaponics.

The word itself comes from aquaculture (conventional fish farming) and hydroponics (the act of growing produce in water.) When the two practices are combined a symbiotic relationship is formed between the plants and the fish.

Sawyer continues, “In aquaponics we have a perfect balance system where plants, along with beneficial bacteria, take the nitrates, ammonia and nitrogen from fish waste and convert them into a useable fertilizer source. This fertilizer is then consumed by the plants, and the water is returned back to the fish clean.” Chemicals like herbicides and pesticides are not needed, and a natural ecosystem is mimicked.

Although aquaponics has been used by ancient cultures for thousands of years, both the possibility and necessity of employing it on a large, commercial scale is now here. The world’s wild fisheries are not replenishing themselves any time soon, and in order to continue to have the option of wild-caught fish, we must patronize, support and rally around environmentally responsible fish farms.