Can Sesame Street marketing make produce cool? Why not try? 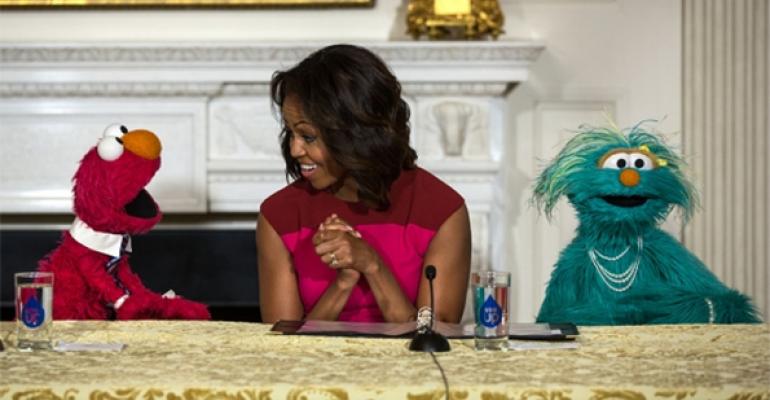 Really. Could it hurt?

He and his friends on Sesame Street taught me a lot when I was growing up. So why would it be so bad to engage them in promoting healthier food choices today?

I’ve been thinking a lot about the idea of marketing health and healthier products, even to kids, this year and particularly in the last week.

It started in January when I talked with retailer Scott Nash, who convinced me Dora the Explorer was doing wrong in his MOM’s Organic Market frozen cases. Her dancing image adorns the front of handy-size packages of edamame. Mommy bloggers eat them up, but Nash wasn’t biting. Instead, he decided to ban Dora and other child-enticing, cartoon-character-bearing products from his 10 greater D.C.-area natural foods stores. His simple reason: Marketing to kids is wrong.

Then last week, First Lady Michelle Obama posed with Elmo and Rosita as she announced a two-year-free licensing agreement allowing Sesame Street character use in fruit and vegetable promotion. Program partners are the Produce Marketing Association and the Partnership for a Healthier America.

Somewhere in between, some of my co-workers took part in a New York Times project (finally published Sunday). The newspaper asked an ad agency to brand broccoli.

“How would you get people to want to buy and eat broccoli? What would your campaign look like? What would the message be? What would you do that all the well-intentioned government-funded campaigns have failed to do for generations?” the Times asked.

Fun questions to inspire imagination. Serious questions, though, when you consider today’s youth likely won’t live as long as their parents. The culprit? Obesity.

What is your opinion about marketing healthier food choices to children? How can health food stores responsibly tout healthy options?

Food marketing isn’t all fun and games. Industry spends $1.8 billion a year just on marketing to kids, according to Yale Rudd Center for Food Policy and Obesity. Interestingly this represents a 19.5 percent decline, according to the Federal Trade Commission. (Some attribute the drop to cheaper marketing options such as social media.)

Youth become a cog in this massive consumerist wheel that drives America. And the fact is that all of us in the natural products industry play a part in the broader consumptive society simply by being in business.

Why not accept this role and become a catalyst for change? Why not use the tools that inspire purchasing to influence better, healthier choices? Why not accept a little help from our friends, our friends on Sesame Street?