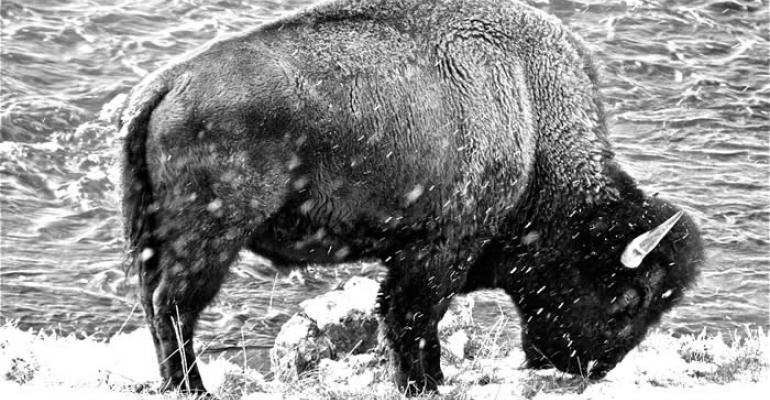 The history of buffalo over the past two centuries is tangled with ranchers, Native Americans and conservationists… and, not always in a good way.

School children learn the story of how westward expanding white settlers pushed Indians onto reservations, and buffalo to near extermination. Conservationists weren’t much help then, either. When the Smithsonian Institution determined in the 1880’s that buffalo were headed toward extinction, it dispatched taxidermist William Hornaday to the West to shoot and stuff as many bison as possible so that future generations could see the specimens.

What school children haven’t been taught is how some of those villains also became the saviors of buffalo.

As the 1800s came to a close, five ranchers began to gather up the last remaining animals wandering the prairies. They were a diverse lot, and included Charles Goodnight of Texas cattle drive fame, showman Buffalo Jones of Kansas, and Pend d’Oreille tribal member Samuel Walking Coyote.

The strays they gathered formed the foundation for most private and public herds today. A couple of them tried to cross buffalo with cattle, but soon found out that they ended up with sterile bulls and cows with bad attitudes, so they abandoned that experiment.

Hornaday, meanwhile became the head of the Bronx Zoo, and realized that taxidermy wasn’t the best way to save a species. He teamed up with Teddy Roosevelt to establish the first public preserve for buffalo in the West, and to populate it with animals from the Bronx Zoo.

By 1960, the population of bison in North America had climbed back to about 10,000 animals. Then someone else began to get involved with ranchers, conservationists and tribes to help bring the North American bison population close to half a million. That—of course—is the American consumer.

As the public discovers the great taste of bison, ranchers have found an incentive to restore the animals back to pastures across the country. Native American tribes, too, are building herds as a vital part of their economic development plans.

Earlier this year, the National Bison Association, the Wildlife Conservation Society, and the Intertribal Buffalo Council came together and agreed that the bison deserves to be recognized as the official National Mammal of the United States. Republican Senator Mike Enzi of Wyoming and Democratic Senator Tim Johnson of South Dakota both thought it was a great idea, and offered to carry the legislation. The Bison Legacy Act is now moving its way through Congress.

The three groups also decided that the bison deserves is own special day on the American calendar. That’s why the first Thursday of every November will be celebrated as National Bison Day.

That is something to celebrate.