Perfume is expensive. Candy is not.

Candy is edible. Perfume is not.

One can almost picture the hamster-like workings inside the brains of BENEO when it launched its latest innovation in Europe: candy that makes you smell like roses. Now you can have your candy and smell like it, too. 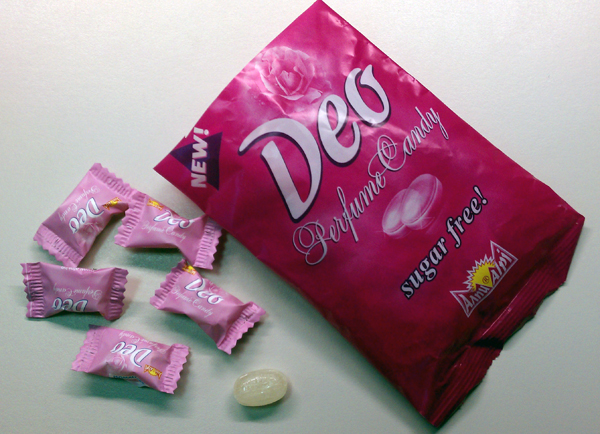 Deo Perfume Candy contains geraniol, the main component in rose oil. Much like garlic, geraniol leaks through one's pores, delivering a perfuming effect. It's commonly used in many perfumes and is safe for consumption.

Because I'm not a mind reader, I asked BENEO about this new-to-me concept. They kept most of the details under wraps, but did tell me that the idea was initially presented to Bulgarian confectionery manufacturer Alpi. "They immediately liked the idea and came aboard," said Wim Dries, BENEO area sales manager.

Deo (that's "Deo" as in "deodorant") Perfume Candy is currently sold in Bulgaria and other Eastern European countries such as the Czech Republic and Hungary. The only competitor, so far, is the Japanese with their geraniol gums that made it to market before Deo.

Perfume you can eat—but does it work?

"People are just fascinated by the idea of 'perfume you can eat,'" Wim told me. So were we at newhope360. So BENEO sent some over and a group of us tried it out. Here's the report:

As for me, I enjoyed the taste but thought the candy lost it rather quickly. Still, the candy was a thousand times better than those sugar-free lollipops I used to avoid at the pediatrician's office. BENEO's Isomalt alternative sweetener is used here to great success, making the confection sugar free and low glycemic.

Throughout the day I kept sniffing my wrist, waiting to come up roses. While I didn't detect a change in skin fragrance, it may be that I got used to the aroma. So, BENEO, next innovation idea: perfumed candy that changes scents every half hour.