Food fright in the produce section 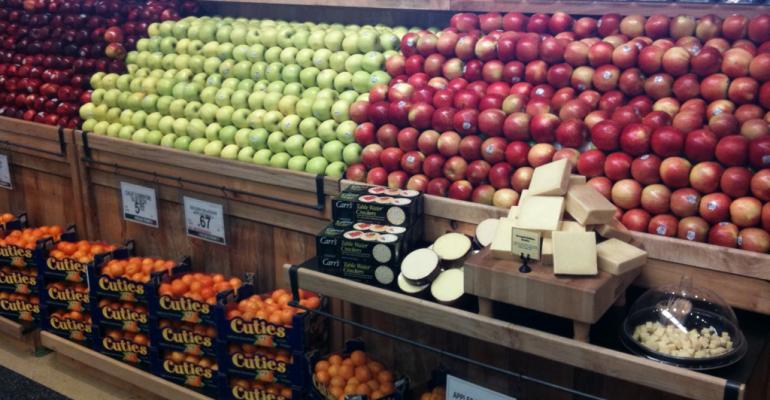 How about some processed mozzarella with those heirloom tomatoes? If you're buying avocados, might you also need tortilla chips? These questions might face shoppers more frequently if retailers give in to increasing demands from finished-product manufacturers. As the nation begins to connect healthy eating with the whole, real foods found in the produce section, makers of juice, cheese and other processed foods want permanent placement next to good-for-you fruits and vegetables.

“The produce section has become the equivalent of the popular kids' school-lunch table. The area is increasingly located near the supermarket entrance, so every shopper passes through it. And stores are finding that consumers consider even packaged foods placed there to be fresher and higher quality—researchers call this a ‘halo effect,‘” according to a recent Washington Post article.

Of course, Kraft Foods, maker of such nutritional stalwarts as Jet-Puffed marshmallows, Cool Whip and Lunchables, is a major player in the push to mix up traditional grocery store layouts. The company has envisioned a retail setting that moves refrigerated items to the front of the store, next to the kale and apples. Such a move would help the company "play up the fresh factor" of its products and "make it easier to inspire shoppers to make impulse purchases." Check out the proposed store layout.

With about one-third of all U.S. adults now considered obese and approximately 12.5 million children obese or overweight, tempting shoppers who are looking for veggies with optimally placed high-fat, processed foods seems a pretty obvious step in the wrong direction. Rather than tricking shoppers into thinking its products are healthy by putting them near nutrient-dense foods, why doesn't Kraft deliver better-for-us items that actually would belong in the produce section? Perhaps a twist on the high-sodium Lunchable that, rather than lunch meat, cheese and white crackers, incorporates green vegetables and whole grains?

Luckily, so far stores aren't readily accepting this idea. In the December issue of Natural Foods Merchandiser, we profile several retailers moving in the exact opposite direction of Kraft's proposal. Stores such as Whole Foods Market, Natural Grocers by Vitamin Cottage and Jimbo's Naturally are making it easier for shoppers to identify healthy foods. Each leads a store tour that for now highlights the benefits of shopping the perimeter. Let's hope it stays that way.