Forks Over Knives offers compelling reason to change your diet

Some movies make you think. Others scare you so much they keep you up at night. Forks Over Knives is a just-released documentary that has the potential to do both. After watching it yesterday, I'm hoping that more people take its tagline "Warning: This movie could save your life!" to heart. 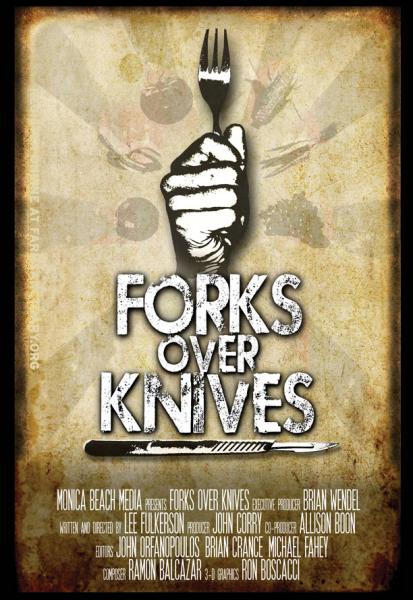 The film follows the research of Dr. T. Colin Campbell and Dr. Caldwell Esselstyn, two farm-raised boys who later went on to eat and do research on the health advantages of whole food, plant-based diets for controlling, and even reversing, degenerative diseases such as heart disease, type 2 diabetes and several forms of cancer.

The filmmakers weave the doctors' research among the tales of several people ailed by degenerative disease. One by one, these patients visit a husband and wife MD team that prescribes a plant-based diet. And, one by one, these patients lower their cholesterol, lose large amounts of weight and one even discontinues entirely his insulin shots and six-pill regimen. The amazing part? This is a true story.

Forks Over Knives is different from other food documentaries. Its focus is how the Western diet causes many Americans to meet the surgical scalpel - and how to avoid that fate. It's less about the environmental aspects of food production (although it is mentioned) or whether you should eat organic. Instead, it presents food from a healthcare point of view – both to cure people and our expensive and unsustainable healthcare system. What pill has been known to do that?

As a vegan, I didn't watch this movie to be convinced. I watched it to become more educated about why I think being vegan is responsible not only for the planet, but for my health. In the process, I learned something that blew my mind. It's the reason I want everyone I know to watch the movie: Cancer growth can be turned on and off based on the foods we eat.

Dr. Campbell concluded this in a rat study. Rats were alternately fed, every three weeks, a diet of 20 percent and then 5 percent casein protein. Every single rat got liver cancer or precursor lesions. But interestingly, the rates of cancerous cell clusters that became tumors fluctuated. On the 20 percent casein diet, these clusters increased, but when dropped to 5 percent they decreased. When Campbell substituted plant protein for animal protein he found plant protein did not promote cancer growth even at the 20 percent protein intake.

What's disheartening is that the concept of "let food by thy medicine" is nothing new. The film describes this by featuring legitimate, extensive research (The China Study in particular) that has been known in the medical community for years. But so far, how many Americans can say we put that research's precepts into practice? It's time as a culture that we get serious about this. It's our lives at stake.

The movie is on limited release in the United States and Canada. Find a showtime near you and tell everyone you know (especially if they have a degenerative disease) to watch it. It could save your life.