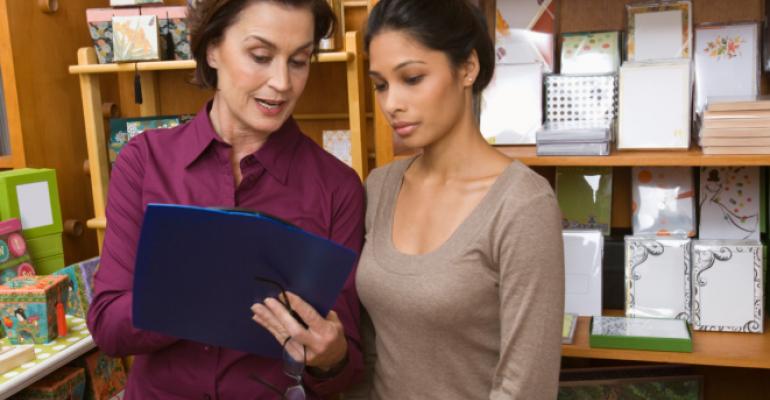 Slowness, inefficiency, tardiness, excessive absences, grumpiness with customers, failure to clean up at the end of the shift, standing around during slow periods—these are employee performance problems that if unaddressed could grow increasingly serious over time.

Often though, when managers try to speak with employees about performance issues, the discussion causes so much defensiveness that the employee can’t “hear” what is being said. Is it possible to offer feedback that will actually empower employees to make positive change?

Here are four guidelines to show you how.

2. Keep it brief.
The longer you speak, the less the other person will "hear" and the more defensive she will become.

3. Don’t delay.
Feedback is most useful at the earliest opportunity. Speak with your employee immediately following a particular event or behavior.

4. Let the employee save face.
Gandhi said, “Never corner your opponent. That is when they will use force on you.” Give the other person a way to keep her self-esteem intact. For example, for a first-time lapse in following a procedure, simply accept an excuse that the employee “misunderstood,” and put the emphasis on “next time.”

The importance of behavioral literacy

The approach you take to giving feedback will influence the tone and words you choose as well as the likelihood that such feedback will actually bring about positive improvement. To be successful you must also cultivate something called behavioral literacy—the ability to identify, understand, and interpret the behavioral cues that we humans are constantly giving each other.

Why focus on behavior? We are constantly drawing conclusions about others’ motivations and attitudes based on their behavior. Those conclusions however are only our best guesses about what is going on in their heads. Framing feedback to employees in terms of observed behavior, we refrain from judgment and keep the conversation focused on what we actually know rather than what we surmise.

A person may not know what you mean when you call his behavior disrespectful, but by offering constructive feedback in terms of specific behaviors, you may actually be able to get an employee to stop shrugging when asked a question, walking away when you are speaking to him, or holding side conversations during a department meeting. By focusing on the behavior, not the person, your constructive feedback has the best chance of bringing about improved performance.

How to structure your discussion

Carolee Colter started her career working for a natural foods co-op distributor in 1973. She has helped hundreds of co-ops and independent retailers with management training, employee surveys and HR systems, and is part of the CDS Consulting Co-op HR Team.

Do you know what employees are saying about products you stock?
Aug 29, 2011