On the day of the great unveiling of USDA's new food plate, I can't help but feel nostalgic for the Food Pyramid of old. I'm not talking about MyPyramid (what was the point of that thing, anyway?) – I'm referring to the black and white version of my childhood plastered on the wall of health class.

My favorite part about this pyramid was the confetti dots at the very top – yellow and white specks with the warning "USE SPARINGLY." Of course, being at the top of the pyramid, and being my favorite food group at the time, fats, oils and sweets never seemed to me the enemy. They were the decadent cherry on top.

Fortunately, I've grown up to enjoy tomatoes and vegetables I didn't know existed (kale). While the sweet "food group" still lures me in from time to time, my diet no longer resembles anything close to the pyramid. But it does resemble the new food plate, with the exception of the "protein" slice. 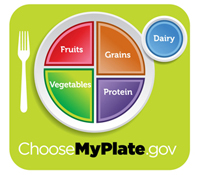 As a vegan, I have a hard time identifying with this piece of the plate. Protein is in plants. It's in grains. It's not just in meat, though the meat industry would rather you believe otherwise.

Even at restaurants and natural foods stores, you'll find "add a protein" next to an entree. OK, so does that mean I can add peanut butter (6-8g protein) to my pizza for $2.99? Or lentils (18g) or spinach (5g)?

Just kidding. I would never add peanut butter to my pizza.

While the MyPlate website does categorize foods that belong in this protein section, it's awfully confusing, because several items, such as beans, also belong to the vegetable group.

In our interview yesterday, Marion Nestle was right to say the icon's inclusion of protein is inaccurate because it's a nutrient, not a food. But the alternative would have been to call this section meat, which the administration is clearly trying to skirt. Or are they? It didn't help that in today's press conference, Agriculture Secretary Tom Vilsack said that by protein the USDA meant meat.

Meat isn't the only protein

While the food icon is a huge step forward for accurately depicting what Americans should be eating, it fails to help change the indoctrinated paradigm that protein equals meat, end of story. And so I'll have to continue to explain where I get my protein, and so will 7 million Americans, or 3 percent of the adult population, who are vegan.

Last Sunday I attended Udi's Vegan Supper Club in Arvada, Colo. This four-course vegan meal was the epitome of the new food plate, minus the meat and dairy (By the way, where's almond milk on the new MyPlate?). Oils were used sparingly, whole grains were served and vegetables appropriately portioned so that by the end of the meal you didn't feel bloated – you felt content.

"This," I thought, "this is what more restaurants need. This is what more Americans need!" And there's no reason why we can't have it, no matter what food pyramid we grew up with, as long as we educate ourselves.

Meat and dairy will probably always be part of the USDA's guidelines due to politics. But the next time the icon's revamped, it would be nice to see the word "protein" disappear.