As any savvy product marketer knows, consumers want choice. Whether they're targeting a core natural products consumer or a mainstream consumer, brands are all about delivering choice every day to retailers in hopes that a consumer chooses their product. But every day consumers choose products that they have no choice in, because they aren't even aware there's a choice to be made. 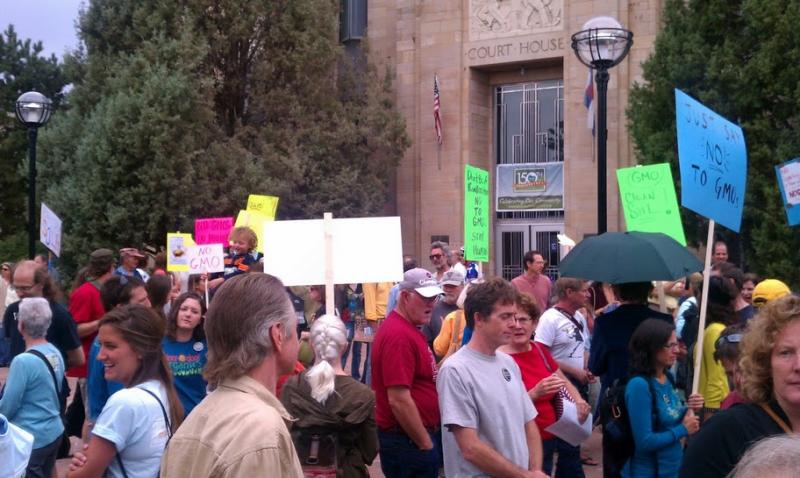 Today, some 500 of those consumers, retailers and manufacturers showed up at the Boulder County Courthouse from 11 to 2 p.m. to make that choice known. The Big Boulder Shutdown by GMO Free Boulder is the first of several events, says citizen advocate and advisory board member Scott Smith, to prevent the planting and growing of genetically modified crops on Boulder County owned land. Boulder County, like the majority of the U.S., currently allows the planting of GMO corn on publicly owned Open Space and commissioners are now writing policy to allow more GMO crops on public land.

NewHope360's offices are right across from the rally, so although it was convenient to go, we also felt it was imperative to show up. It was my first rally, and certainly my first non-GMO rally and I was impressed with the turnout. GMOs are not much of a national debate, even though we frequently write and talk about them at our conferences and in our publications. I'm confident that local efforts such as this one will drive the debate.

But it wasn't just consumers taking up the majority of the rally space. It was Alfalfa's, a local natural retailer who has pulled some products from its shelves when it discovered there were GMOs, said Dallas Pedersen, assistant store director, holding a "GM-Lame-O" sign.

Also, Mile High Organics, an organic and natural delivery service that strives to be the only non-GMO grocer in Colorado, said Wendy Goldner, vice president of marketing.

And it's Silk Soymilk by WhiteWave Foods, who showed up in their Non-GMO Certified t-shirts and specifically went certified so that consumers could know about their choice, said Sara Loveday, senior manager of external communications.

Although signs depicted skull and crossbones and disparaged Monsanto, nearly everyone I talked to pointed to simply wanting a choice: Are there GMOs in my food or not? Unlike Europe, we don't have mandatory labeling for GMOs.

Ironically, non-GMO advocates and Monsanto have one thing in common: They're both pro-farmer. But that's where the similarity ends. While Monsanto claims their biotechnology helps farmers to meet growing food demands, non-GMO advocates (and farmers themselves) know that "help" comes in the form of "I have no choice but to use your seed and your pesticides on my land." As a result, consumers have no choice, especially when they aren't even informed that there are GMOs in their food.

So if farmers can't stop Monsanto, and the government is deregulating crops such as alfalfa nationwide, and local governments are opening up more land to GMOs, who's going to stand up for choice?

It starts with you.