HomeNewsTop takeaways from the 2012 EcoFarm Conference
Recent
Latest
Sponsored Content
How brands can get their trade spend under control – article
Sponsored Content
Going organic lifts everyone up – video
6 natural brands partner with UNSTUCK on new product line to aid refugees
Jun 23, 2022
Sponsored Content
The power of organic messaging – download
Trending
Getting ready for 2023: Trends for brands to consider
May 17, 2022
Unboxed: 7 clean collagen powders with a twist
Jun 21, 2022
12 brands marketing positivity, kindness and joy
Jun 17, 2022
Coca-Cola axes Honest Tea, but its founders are just getting started
Jun 07, 2022
New Hope 360 Blog
brought to you by

Top takeaways from the 2012 EcoFarm Conference 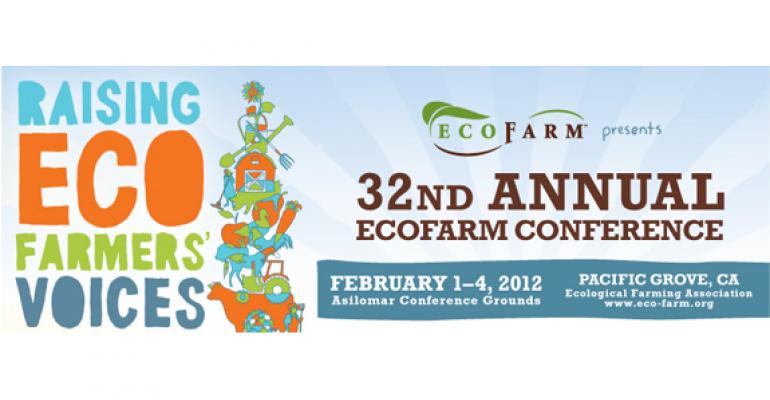 Last week I attended EcoFarm Conference, the oldest and largest sustainable agriculture gathering in the western United States. The event brought prominent speakers and food system stakeholders together for three days in Pacific Grove, Calif., to take on important food issues. Here are the highlights from the discussions I attended.

In recent years, the National Organic Program (NOP)—the arm of the USDA that oversees organic standards—has been much more forthcoming and transparent with farmers and consumers. Lisa Brines with the standards division of the NOP gave an update on current policies and proposed rules, which include several noteworthy issues. To start, the USDA is assembling a team to begin organic aquaculture rulemaking. Consumers are more aware of traceability and this effort will hold producers and retailers accountable for record-keeping, growing and processing practices.

Earlier this year, the National Organic Standards Board, a 15-member advisory panel appointed to make recommendations to the USDA on organic standards, did recommend a proposed rule for organic pet foods, as well as a proposed rule for periodic residue testing on produce.

For organic farmers and advocates, there is still time to submit comments to the NOSB for the National List Sunset Review through March 12, 2012. The National List consists of allowed and prohibited materials that might be used in organic crop and livestock production. In October of 2011, the NOP contracted with the Organic Materials Review Institute (OMRI) to produce a draft list of permitted substances for organic crop production.

Also on the panel, Harriet Behar with Midwest Organic and Sustainable Education Services (MOSES) raised the question of animal welfare. "Do organic regulations represent a high standard of animal welfare? Many organic producers are being pushed by their buyers to get certified with humane animal treatment ecolabels.”

Concentration in the seed industry: It's time to reclaim seeds and build diversity of decision makers

In a standing-room only session led by Matthew Dillon of Seed Matters and Kiki Hubbard of Organic Seed Alliance, we learned about the history and the future of the seed monopoly in America. Dillon, a natural-born teacher, offered a brief history lesson on seed import and distribution in newly-colonized America, as well as an overview of seed production. The danger of current seed concentration among three very large seed companies is that Americans will not have the option to legally barter and trade native region seeds among citizens like we did in colonial days.

Hubbard, also a natural teacher, revealed a series of bar graphs to demonstrate the shocking truth of seed ownership in the United States. "It is imperative that we move towards a farmer-centric seed system,” said Hubbard, as she explained a chart showing that the United States has lost at least 200 seed companies in the last 13 years. There are now three multinational companies that control 75 percent of all corn and soy seed sales. Hubbard attributes seed concentration to weak anti-trust laws and "dozens of unchecked mergers and acquisitions in the seed industry."

"There is a new wave of reclaiming things that are privately held that were once public,” said Dillon, arguing that seeds should be a public commons resource. "We once had healthy public seed systems. We can have it again. But we need new partners, particularly in software, conventional farmers and even Biotech companies. We must reclaim seed as public discourse so there is a diversity of decision makers to pass this resource on to future generations.”

Dave Henson of Occidental Art and Ecology Center and Katherine DiMatteo of Wolf, DiMatteo & Associates led the plenary session on "Organic Agriculture as a Strategic Tool for Global Change,” wherein both gave impassioned speeches on regional organic production and distribution. Henson urges producers, manufacturers and retailers to form a rural-urban alliance, which is the key to our economic future. In the face of rapid oil depletion, the rise in population and climate change, we must organize regionally to develop food sovereignty.

DiMatteo echoed Henson's plea with her own argument that locally-produced food will feed the world. The problem, she said, is that "we load impossible standards on organics producers. This is fine in a competitive market, yet it is not compatible in this economic climate. We have many paths to organic.”

DiMatteo stated that there is room for Certified Organic in our market, "but it won’t work for everyone all over the world." One could sense the increasing tension among the various organic certifiers in the room as DiMatteo fervently addressed their role. "Certified Organic can be successful in the market, but to meet global challenges, Certified Organic must also support regional and locally-produced standards."

Do any of these EcoFarm Conference issues resonate with you? Share in the comments.