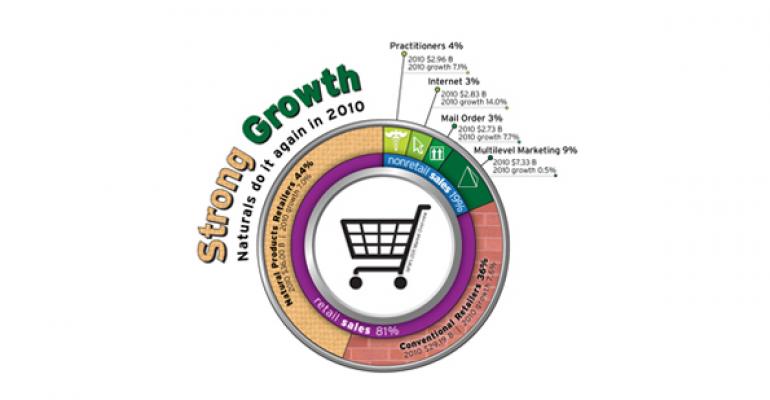 One of the most eagerly anticipated and eagerly read issues of the Natural Foods Merchandiser every year is the June issue: the Market Overview. Next week the print issue will be arriving in mailboxes and the digital version will be posted online. As always, there are tons of relevant data points to explore.

For me, the stats about retail store performance are where I spend the majority of my time. I will be doing a seminar about this retail data at NPA MarketPlace in Las Vegas on June 15. If you are at the show (and you should be!), please join me for this presentation.

The statistics that I reference here have all come from NFM's Market Overview issues from the past five years. In the Overview, NFM refers to stores by "store type:"

Normally the NPS are the largest stores in our industry, with HFS medium-sized and SS as the smallest. There are exceptions, but based on what each store carries, this generally holds true.

Big vs. small vs. medium—a brief history of retail growth

For the last several years, the stores that had the least positive results were the SS. As consumers were driving less and looking to conserve on trips, money and time, larger stores took business from smaller stores. We saw fewer SS having sales increases and those that had increases had smaller ones. At the same time more SS had sales decreases and those that had decreases had larger ones. Sales and customer count went from SS to HFS. The suspicion that I had, but couldn't prove from this data, was that HFS were losing sales to NPS.

The growth of the NPS is well documented. If you searched this site you would find multiple stories about how Whole Foods Market has been performing over the last couple of years, growing sales in a tough economy. You would also see how Earth Fare has been adding stores and expanding.

Well known to most in our industry is the growth of the soon to be merged Sprouts and Sunflower Farmers Market chains, both of which have had incredible success over the past decade. These NPS stores are adding customers and bringing outside investment into the retail part of our industry. They have also been putting stores into markets that have not have any, or a strong, presence of NPS retailers.

For the last several years SS have been where there were challenges and that probably was not much of a surprise.  In addition to the economic and social factors that I mentioned previously, these stores generally have an inventory that is duplicated at larger stores, which have more purchasing power and more ability to discount in a down economy. These stores typically have fewer financial resources to withstand either marketplace or competitive challenges.  In sum, they are the most vulnerable part of our retailers. To be fair, in total, they make up the biggest part of our retail business and are the reason that many brands are in business today.

Let's take a look at data over the past five years detailing what percent of SS have had a sales increase in the previous year:

What a remarkable improvement since 2010! Due to the fact that these stores are also very vulnerable to changes in their local economies, there are bound to be dramatic swings in these kinds of numbers. Even so, 2011 was higher than any of the previous four years and 2012 was higher than any of the previous five! If 2011 was a correction from the challenges faced in 2010, then 2012 was building upon good news at pace that was great to see.

Now, over that same time frame, let's look at the percent of SS stores with a sales decrease:

Again, what a remarkable improvement since 2010! In 2010 there were as many stores having decreases as there were stores having increases and it was the highest in these years. The year 2011 was a big step in the right direction and then 2012 was the lowest number of stores with decreases in this five year period.

What are SS stores doing to improve?

Two things stand out to me, and hint at other things that I expect that they are doing, but can’t use the data to prove.

The growth that they had in 2011 was not only sustained, but built upon in 2012. There has to be repeat business as a part of this—satisfied customers returning, as well as telling family and friends

For the past several years when sharing the NFM Market Overview data, I have stated my concern for the SS stores. This year I am glad to change my tune!

One added point, however, is that due to the relative size of these stores and the broad array of competition that they face, the gains that they have been making could be reversed quickly. They need to stay focused on what got them to where they are and not let up.

What type of store is in trouble?

If there is a class of store that I would express concern about this year, it would be the HFS. If the SS have reversed the trend that they were facing and the NPS are growing like mad, what about HFS? One would hope that the gains at the other classes of stores were from new shoppers and not at the expense of other retailers, but that is sadly not always the case.

My take on this: While fewer stores are doing poorly, even fewer are growing while more of them are standing still. These stores are getting hit from every angle—larger natural products stores, competitors in other channels, online competition, and now smaller stores that are upping their games. Over the past five years, while SS had basket size increase by $8.50, the NPS basket size only went up by $2.31.

When you are the big guy, you can use your size to market and price yourself in a much bigger way. When you are the little guy, you need to focus on what you do and whom you serve. The medium size guy has to carve out a space in his market, especially in the face of rising and improving competition.

How many employees should a natural retailer have?
Apr 12, 2012

11 social media tips for retailers from NPA MarketPlace
May 01, 2012