Where do you stand on Prop 37? 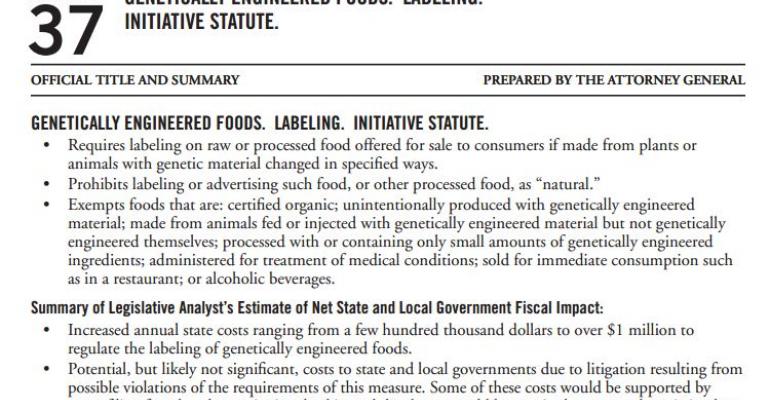 “The future of organic is at stake,” says Mike Bronner of Dr. Bronner’s Magic Soaps, referring to the escalating threats posed by drift contamination from genetically engineered seeds. He’s not alone here. The momentum behind non-GMO has reached a fever pitch of late, from activist marches and sit-ins across the country to labeling initiatives with real traction at both the state and national levels.

Come November, that fever pitch might just find its voice with Proposition 37, a ballot initiative in California for the mandatory labeling of GE food. The polls now have the odds of passage at 3 to 1. Just as Californians voted for Prop 65 to promote clean water, they now appear poised to pass legislation for upping transparency in their food supply.

The stakes here are huge, so expect a fight. As California goes, so might go the entire U.S. market. Were Prop 37 to pass, major CPGs would soon be faced with the very practical, business-minded decision to consider the unilateral purge of GE ingredients from their packaged fare. Remember just a few years ago when suspicion of genetic engineering was but a folly of the fringe? Times change and they change fast.

But voters are fickle and the fight has only begun. Monsanto wrote a $4 million check last week and the opposition’s coffers swelled to $25 million. This compares to just $3 million for the proponents, with lots of tiny checks written by lots of educated consumers on the hunt for authenticity and transparency in their consumption.

And that’s the real point: Transparency is a tough force to fight. Why bother? Regardless of the outcome of Prop 37, this is clearly a watershed moment for food reformists and the pendulum swing of power from corporation to consumer. It’s a force we discuss at length inside the NEXT Forecast, as it manifests across the industries and trends of the natural products industry.

This is also a watershed moment for the organic industry. Would GE labeling provide that oft dreamed of secular bump to industry sales, or would consumers begin to actually turn away from the category in search of toothier seals like non-GMO? Could Prop 37 finally get organic sales to 10% penetration in the total U.S. food supply, or will Non-GMO Project Verified steal that thunder?

We’ve got some ideas to share inside the report linked above, but what do you think? Does your company take a stance on Prop 37? Should it? Just how dramatically might the world change on Nov. 6 for the manufacturers and consumers of the food we share?