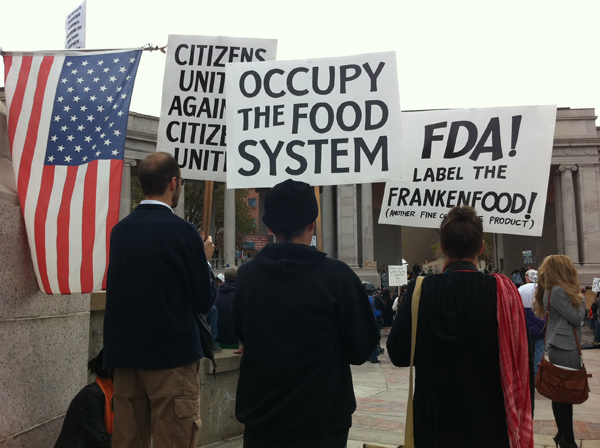 And the food fight continues.

I think we've finally stumbled across a public policy question upon which Herman Cain may have genuine insight. By Congressional decree, pizza is now a vegetable. Yep, right up there with ketchup.

Cain, a one-time pizza chain owner now pretending to run for president as a Republican, makes Rick Perry sound like a genius with a photographic memory when asked this week about Libya.

So fast food is now healthier by dint of changing the definition of what’s healthy. And nevermind the fact that, botanically speaking, tomatoes are technically fruits and not vegetables. Thank you, Congress—I’m sorry, we’re not really talking about Congress, we’re talking about the wholly owned corporate subsidiary that's doing business as “Congress.”

“A massive lobbying effort of Republican lawmakers by the frozen pizza industry, among other corporate interests,” was responsible, according to Brad Woodhouse, communications director of the Democratic National Committee. “It doesn’t take a doozy like 'pizza is a vegetable' to know that the corporate interests have more money and more Washington lobbyists than kids do.”

The Obama plan was to cut sodium, increase whole grains, and increase fruit and vegetable consumption in school lunches. One by one, the powerful lobbies representing salt, grain producers, potatoes and frozen pizza won out over the less-well-capitalized lobbies of fruits, vegetables and health-conscious citizens.

And all this, during November—National Diabetes Month!

We can file this under: irony.

Even my Democratic Senator, Mark Udall, listened to parochial potato interests in Colorado to scuttle the bill.

The potato group would have you believe that potatoes in and of themselves are not unhealthy—full of potassium for crying out loud. No, the problem is in the unhealthy preparation of potatoes—that is, deep frying them in saturated fat bins in order to decrease cardiovascular health and pump up diabetes.

Does anybody really expect school lunch ladies across the country to take the sage counsel of the potato lobby and say, “Yeah, you’re right, potatoes are healthy and we’re going to start making them that way?”

File that one under: If Jamie Oliver couldn’t do it, they won’t on their own.

For his part, Senator Udall replied to my inquiry that keeping french fries in and fresh vegetables out would “prevent unnecessary government limits on the amount of starchy vegetables that schools can serve. It was a triple win: children will continue to get access to potatoes, which are full of fiber and potassium; schools will keep the flexibility needed to plan school lunches; and we'll continue supporting home-grown food and Colorado jobs.”

Before all this down-the-rabbit-hole news makes you go out and enjoy the fresh air at your local Occupy site, let me tell you about one of the best quotes I’ve ever heard, by Steve Demos, the guy who brought Silk brand soymilk to the masses. I asked him how he felt about the fact that hippies apparently lost the political war because, since the 1970s, it’s been one conservative form of government after another. He said, “Politics is not the dominant power. Economics is.”

How to change the system

He is of course right. That’s why the best political move any of us can make is not to lobby your Congressman to mandate the growing of organic crops. (Heck, we’d take just more research into organics and food stamps to include supplements since we’re at it. I suppose given the “pizza is a vegetable” and “french fries are healthy” Congressional actions, that might be asking a bit much.)

No, the best political act you can do is not email your bought-and-paid-for Congressman. Nor is it even to Occupy your local park (although that can be fun, and make you new friends). Rather, listen to Steve Demos and go down to your local independent natural foods store and buy organic food, local food, fair-trade food.

You can vote on pocketbook issues. Or you can just vote with your pocketbook.

So while we groan at the political malfeasance that continues to drive the market toward unhealthy products, you can always elect to be the change you want to see in the world: by spending your change on change.