HomeProducts and TrendsFood and BeverageWill a diabetic foods aisle solve the obesity crisis?
Recent
Latest
3 reasons natural retailers are inflation-friendly shopping destinations
May 25, 2022
Sponsored Content
Organic agriculture and its impact on ingredients and the planet – webinar
Sponsored Content
The goodness wrapped in a certified organic seal – video
Podcast: What brands need to get on shelf at Fresh Thyme Market
May 24, 2022
Trending
Getting ready for 2023: Trends for brands to consider
May 17, 2022
6 tips to promote consumer understanding of Certified Organic
May 18, 2022
The Planting Hope Company aims to prove gender equity leads to success
May 23, 2022
Natural beauty market trends
Jun 16, 2021

Will a diabetic foods aisle solve the obesity crisis?

When I walked into my Ohio hometown's Kroger last weekend I was greeted by a wave of nostalgia and a relatively large organic and natural section that didn't exist when I was a child. I was visiting family, but suddenly I didn't feel so far from Colorado where I now live. And then I turned the corner and saw this. 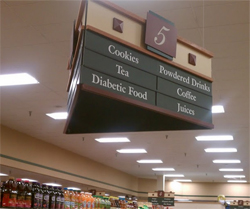 This was the first diabetic food aisle I've ever seen, and it struck me that here and elsewhere in the United States, diabetic foods are the norm. But people have been struggling with type 1 diabetes for years and there was no diabetic foods aisle for them. In fact, one of my best friends growing up had type 1 and we had to stop playing Barbies so she could take her insulin.

As a kid who weekly shopped with her mom at this local Kroger, I can assure you this sign didn't exist, just like the natural foods aisles. That left the obvious: these foods are for type 2 diabetics. These foods are here because the nation is overweight.

I'm going to go out on a limb here and just say it. I think it's a huge mistake to serve type 2 diabetes customers with a "diabetics food" aisle. Here's why.

Confining so-called diabetic foods to an aisle next to other processed foods is treating the symptoms but not the source. It's like going to your doctor and getting an antibiotic for the flu – useless. The flu is going to take its course and no drug can make it better.

So, too, with type 2 diabetes. If you keep managing this kind of diabetes, you keep admitting you have to live with the disease. You stay where you're at, and don't consider the fact that things could be different. And they can.

Type 2 diabetes can be reversed

A recent diabetes study found that calorie restriction for eight weeks restored normal blood sugar levels and actually reversed the condition. After three months, 64 percent of those in the study remained diabetes free.

Just look at the folks on The Biggest Loser. They drop weight by eating real foods and they work hard to burn fat. They don't shop in a diabetic foods aisle and yet, at the end of the show, many of them discontinue all their medications that were helping to manage their diabetes. Or take those who followed a plant-based diet in the film Forks Over Knives. It didn't take long before they dropped their meds, too.

If we must have a diabetic foods aisle, stick the sign above the produce. Place it above the whole grains. Better yet, don't put it in stores at all. What we need in the United States is education about nutrition, not complacency in our grocery stores.