HomeBusiness ResourcesBranding and MarketingFor something new in the protein aisle, brands turn to packaging
Recent
Latest
Sponsored Content
The goodness wrapped in a certified organic seal – video
Podcast: What brands need to get on shelf at Fresh Thyme Market
May 24, 2022
Natural Habitats releases Palm Positive+, A Reference Guide
May 24, 2022
The Planting Hope Company aims to prove gender equity leads to success
May 23, 2022
Trending
Getting ready for 2023: Trends for brands to consider
May 17, 2022
Whole Foods' honors 30 companies with 10th annual Supplier Awards
May 18, 2022
6 tips to promote consumer understanding of Certified Organic
May 18, 2022
Natural beauty market trends
Jun 16, 2021

For something new in the protein aisle, brands turn to packaging 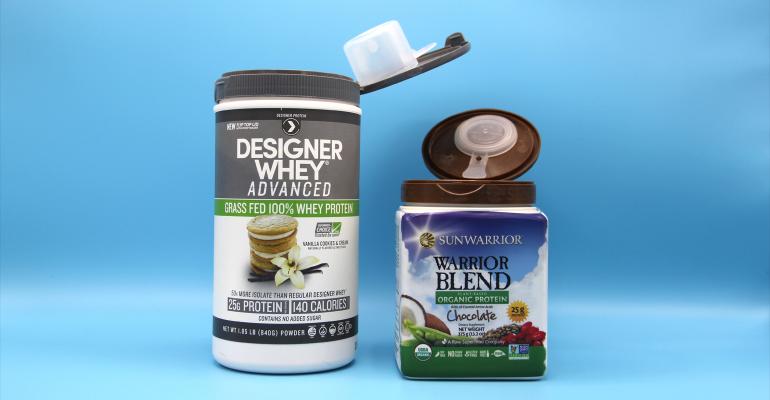 In a category flush with options, some companies are looking at innovation from a different angle: Making the user experience easier and more enjoyable.

Protein powders is one of the those categories. U.S. sales of sports nutrition powders in all channels grew nearly 54 percent between 2011 and 2016, according to Nutrition Business Journal data. It's a category that's also seen new entrants and lots of new SKUs as the sports nutrition supplement market has expanded and become more approachable to consumers outside of the bodybuilding and elite athlete communities.

Designer Protein is one of the companies approaching innovation from a user experience standpoint. It has several lines of whey and plant proteins and superfood powders designed for fitness, performance and weight management. Recently, in response to customer feedback, it launched a new flip-top lid that can be opened with just one hand for some of its protein products.

“From females in particular, we’ve heard that some of the caps [on protein powders] are really wide. If you have a smaller hand, they’re tough to get off, or if you have any health challenges like arthritis, it’s also difficult to get the cap off,” said CEO Jan Hall.

The underside of the lid houses a snap-in-place scoop holder, so that once users find the scoop inside the container on the first use, they can snap it into the holder and won’t have to go digging again.

“I was really excited when we discovered this new flip-top lid, because I thought it addressed some of the pain points we’ve heard from consumers for many years,” said Hall, who spotted the lid design at a trade show.

Sunwarrior, a plant-based health food company, also heard many of the same pain points from its customers. The company produced and patented a flip lid equipped with a collapsible scoop that snaps into the inside of the lid, eliminating the need for users to dig for the scoop, even on the first use.

The new packaging hit the shelves in April, and according to Emerson Carnavale, chief supply chain officer at Sunwarrior, feedback has been very positive. But it’s also required some education. “There are still some people that are so entrenched in their behavior that they open the tub and dig inside looking for the scoop, then call our customer service reps informing them they didn’t get a scoop,” he said. “We patiently tell them to look under the lid, hear silence, and then ‘Oh, wow, that is awesome!’”

Bringing the new lid to life took about 17 months for Sunwarrior, but the company thinks it could be a real game-changer.

Designer Protein’s Hall echoes that: “In my career, I’ve found that sometimes packaging changes can have a bigger impact than changing a product or launching a new product.”