Why new brands need both e-commerce and retail strategies

NBJ's proprietary research indicates that independent young brands are looking past retail in their launch strategies and focusing on e-commerce as an initial step. But how will this change the fate of brick-and-mortar, and what does Whole Foods have to do with it?

Why bust your butt and drain your funds trying to get into Whole Foods Market when you can launch your new natural product online? New companies no longer need to rely on the longtime kingmaker for their big break. In fact, they can bypass brick-and-mortar retail altogether—and the headaches, heartaches and wallet-bleeding that can go along with it—and create their own destinies.

The number of online launches in the natural products industry has been climb­ing steadily over the past two decades. But now, according to a recent New Hope Net­work survey of 299 manufacturers, e-com­merce has become the most popular route to market among new brands. Of those that launched within the last three years, more than half did so online, compared to just 23 percent of three- to five-year-old brands. The online launch rate is even higher among dietary supplement and functional food and beverage manufacturers.

“These findings do not surprise me,” says Maryellen Molyneaux, president and managing partner at Natural Marketing Institute. “It is becoming more common to launch online, both out of opportunity and necessity because Amazon has such a large influence in the marketplace right now. While iHerb, Vitacost and many others sell healthy products online, it’s just the nature and size of Amazon that everyone thinks presents all the opportunity.”

Everyone is not wrong. NBJ estimates show internet sales growth is now double that of the total natural products industry. And in the manufacturer survey, third-par­ty e-commerce—Amazon and the like—is the number-one growth channel. Eighty-nine percent of respondents said their sales in this channel increased over the last five years; 70 percent reported an uptick in sales via their own websites.

With internet sales soaring, NBJ want­ed to know how natural products manufac­turers feel about brick-and-mortar’s future. Asked how important they think physical stores will be in the next five years, 20 per­cent said “not important at all,” while an­other 7 percent said “not very important.” Dietary supplement companies see even less value in brick-and-mortar with 41 percent considering it unimportant. But when asked about e-commerce, 84 percent of total survey respondents said it will be either “very important” or “somewhat im­portant” in the coming five years.

Clearly, for many natural products brands, especially startups, e-commerce is working. It is often a much cheaper path to launch, offers infinite shelf and lets manu­facturers sidestep the complexities of get­ting into stores—or at least put them off until later. “With online, the barriers of en­try are much lower, whereas at retail, they are only getting higher and more complex,” says Yadim Medore, founder and CEO of Pure Branding. “For someone who under­stands e-commerce and digital marketing, it’s not rocket science.” 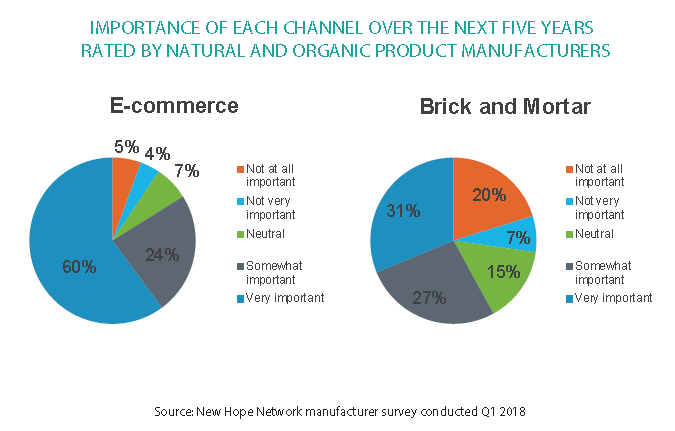 Jay Jacobowitz, founder and president of Retail Insights, agrees: “As a startup CPG, why wouldn’t I launch online in­stead of jumping through all the hoops to get into traditional distribution channels? Now brands can create their own buzz on Instagram, Snapchat and Twitter. For a few thousand dollars, you can go to San Fran­cisco, hit a few yoga studios and get people talking about your product. Get some brand ambassadors, and the cost is miniscule.”

Once these efforts generate some con­sumer demand, then it becomes pull mar­keting, not push, says Jacobowitz. “When you have lots of rabid fans, suddenly UNFI has to pick up your product because Whole Foods wants it,” he says. “You’re slashing your cost probably 90 percent of what would it take you to mount an analog campaign through traditional distribution channels. I’d be surprised if any startup didn’t start that way.”

E-commerce isn’t perfect, though. “Launching online presents its own set of problems and challenges,” Molyneaux says. “To have people find you, you need very good digital marketing programs so you are seen and heard. E-commerce is an even bigger universe [than retail], and it is some­what not highly visible or obvious.” And, of course, brands have to deal with Amazon’s fees, tricky algorithms, price slashing and propensity to knock off successful products.

Drawbacks aside, however, e-commerce delivers a lot that retail stores can’t. For one, it offers nearly unlimited reach, a key asset for brands, since so many more consumers than ever are seeking out natural products. “Eighty-three percent of consumers are interested in natural and organic at some level and by different motivations,” Moly­neaux says. Many of those interested be­long to the 80 million–strong millennial generation, meaning they are often glued to their smartphones. “When trying to touch a generation that’s been brought up on the internet,” says Molyneaux, “the internet is how you need to reach them.”

E-commerce also allows companies to tell their stories—about transparency, in­gredients, mission and other values that consumers increasingly care about—in their own voices, without relying on a re­tailer to pass on the message. “There is this new generation of young leaders coming in who understand the online world and see it as an opportunity to disintermediate the trade and connect directly with consum­ers,” Medore says. “They have a much more sophisticated understanding of the term ‘brand’ and are building brands that have deeper meaning than those of the past. This gives them another way to connect directly to consumers.”

Obviously, some product categories will sell better online than others. With perish­able foods and beverages, shoppers want to taste, smell and feel before buying, so those brands almost need some retail ex­posure. “If you’re an online startup, how do you convince consumers to try an unknown food?” Jacobowitz asks. Plus, with low price points, most foods are not cost-effective to ship. “It goes back to cube, weight and per­ishability,” Jacobowitz says. “It doesn’t really make sense to send a low-price-point bread with 20-day shelf life—shipping costs will eat up the profits. The ideal product profile is a high-dollar, low-weight vitamin, where the shipping cost is a low percentage of the selling price.”

Another reason dietary supplements are inherently well-equipped to sell well on­line: “Education has always been key with supplements, and in brick-and-mortar we are seeing a reduction of educated staff on the floor,” Medore says. “But even before the big growth in supplement sales online, consumers were already researching prod­ucts online and then going to the store to purchase them.” Now they are continuing that research behavior but staying online to buy. And, as Molyneaux points out, “when shopping for supplements, everything you can see in person, including the back of the bottle, you can see online.”

All the changes brewing within Whole Foods are another force pushing brands web-ward. According to Bob Burke, found­er of Natural Products Consulting, the natural retail giant had traditionally been many startups’ first port of call. “For a long time, Whole Foods categorized suppliers as local, regional and national, but now ev­erything is going through Austin,” he says. “Before, a local company maybe started in a farmers’ market. Then when they were retail-ready, they walked into the Boulder Whole Foods store, and maybe the guy stocking shelves was the grocery buyer for that store. Even if it was tough to get into that region, you could go into a local store and possibly get set up.”

But now with Whole Foods central­izing operations, which began before the Amazon acquisition, Burke says brands are confused about how to engage with the retailer. Plus, shelf space has gotten more limited now that Whole Foods requires all direct vendors to go through UNFI. “We estimate that by implementing this new policy, 5,000 to 10,000 SKUs, many made by local folks, are suddenly out,” Jacobowitz says. “UNFI also is a real-world analog op­eration, and their 18 warehouses can’t mag­ically produce 5,000 new slots.”

Shelf space is also more expensive now. “Whole Foods is charging vendors, almost indiscriminately, an extra 3 percent,” Jaco­bowitz says. “These costs are being pushed down through UNFI and back to the vendor. With this getting much more ex­pensive for brands, who will survive? The deep-pocket CPGs.”

So, while Whole Foods’ moves may help the company improve execution, a perpet­ual complaint about its regional structure, they don’t bode well for small manufactur­ers and startups. “This was a 180-degree turnabout for a brand that touted having its finger on the pulse with 12 local regions, regional managers and individual store managers having the autonomy to respond to customers,” Jacobowitz says.

With everything e-commerce can pro­vide natural products brands, both old and new, is brick-and-mortar doomed? Hard­ly. “There is always going to be a role for retail,” Burke says. “There are just so many other opportunities today to get products to consumers.” Online, it just so happens, is a pretty fantastic one.

Also, while there has been a definite increase in digitally native brands with no plans of landing on store shelves—main­ly dietary supplement, functional food and personal care manufacturers—lots of online startups still go into retail as well. Some launch in both channels concur­rently while others pick up brick-and-mortar accounts after getting their feet wet and gaining traction online.

“There are plenty of dietary supplement brands building their own online tribes via social media and selling through their own websites,” Ordonez says. “For many, a natural second step is to make their products available via online retailers. Then in some cases, a third step is [brick-and-mortar] retailers, driven by consumer demand, approaching supplement companies directly in an attempt to offer new products in their stores.”

That’s why brands today typically devel­op both an e-commerce and a retail strat­egy, says Bill Weiland, founder, president and CEO of Presence Marketing/Dy­namic Presence. “Even if they don’t have both right away, they’ll eventually have a two-pronged approach,” he says. “Distrib­utors eat into margin, sales agents eat into margin, so going forward I think there will be companies that have tens of millions in sales before they show up in stores—and it may not begin with the classic retailers like Whole Foods or Kroger.”

Whatever types of retail outlets prove the best fits for natural products in the future, Weiland insists brick-and-mortar will remain a lucrative channel. “I believe there will be a higher percentage of all goods sold online versus at retail, proba­bly for most categories, within the next 10 years,” he says. “However, people un­derestimate the need for socialization, getting up and about and shopping in an actual store, so there always will be a cap on what online sales will be. To people who say brick-and-mortar is going away? You guys are high.”