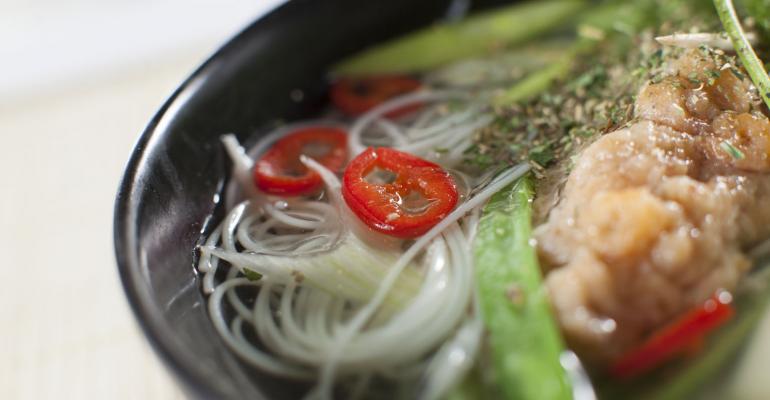 Survey shows that consumers are increasingly expecting the same richness and intensity of flavors from home menus, making spicy tastes a vital area for food manufacturers to explore.

DSM, the global life sciences and materials sciences company, published the third of its Global Insight papers, stating that their savory consumer perception survey shows that spiced food is now the preference around the world in countries as varied as China, U.S., Poland and Nigeria.

The paper, which is part of the Global Insight Series launched last year, reveals that when asked to rank typical food tastes they prefer to eat or prepare at home, 66 percent of respondents listed ‘spicy’ as one of their top three choices out of a list including ‘spicy’, ‘salty’, ‘sweet’, ‘sour’, ‘sweet & sour’, ‘plain or mild’, ‘bitter’ and ‘other.’ U.S. consumers responded exactly in line with the average score with 66 percent saying they prefer spiced food. Nigeria tops the list with 81 percent, whereas Brazilians lag behind with only 37 percent saying they prefer intense and hot flavors in their food.

Where once people may have primarily eaten spicy foods in particular settings such as ethnic restaurants, the survey demonstrates that consumers are increasingly expecting the same richness and intensity of flavors from their home menus, making spicy tastes a vital area for food manufacturers to explore. In addition, spicy snacks have surged in popularity. As spiced foods become part of people’s daily diets, they will demand the same qualities from their ready-to-eat dishes: fresh and authentic tastes with complex flavors that are free from unfamiliar additives and represent good value for money.

The survey, which was carried out in the U.S., China, Brazil, Nigeria and Poland showed that around the world, men are somewhat more likely than women to select spiced dishes as their favorite food (70 percent versus 62 percent of respondents). A study presented at last year’s IFT also suggested a correlation between the preference for highly spiced food and risk-taking personalities (‘sensation seekers’). For manufacturers, it will therefore be important to establish exactly which intensity of taste their target audience prefers, opening up opportunities for more ‘lifestyle’ marketing approaches.

Frank Meijer, application expert at DSM Food Specialties’ Savory business explains: “Creating spiced foods is no longer a matter of adding a single ingredient such as chili or pepper: it is a process of building a complex and satisfying flavor with spicy qualities at its core. Layering is key to achieving this, as is an understanding of what each ingredient adds to the dish or snack’s flavor profile.”

DSM’s savory ingredient development strategy is based on a multi-tiered, taste pyramid formulation approach where the base of the pyramid provides an initial savory umami taste that is rich and lingering. Following this, the middle blocks of the pyramid deliver specific taste directions (boiled, roast, fried etc.) by using natural ingredients to stay as close to the home-made cooking experience as possible. Finally, process flavors add complexity and intensity to the finished recipe as well as producer’s preferred top notes. It is the layered approach that helps deliver intensity, complexity and flavor richness that forms the basis for a spicy, lingering and delicious taste sensation.

The full report can be accessed free of charge here and an infographic highlighting key data here.