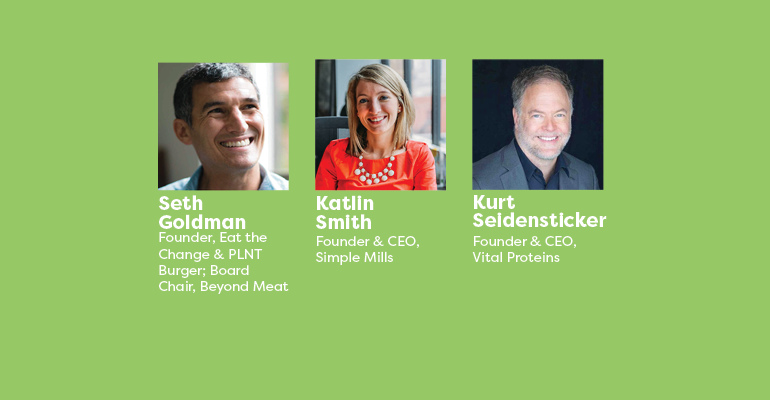 Here, natural products industry leaders chart a cautiously optimistic path for companies in the wake of the COVID-19 pandemic and civil unrest against racism.

If you want your natural products business to grow big, who better to learn from than industry leaders who got ahead of trends and saw their companies soar as a result?

That was the context for Naturally Chicago’s June 4 webinar entitled “Navigating the New Normal: Stoking Momentum at High-Growth Brands.” Three of the panelists are innovators whose still-young companies have blossomed into market leaders over just a few years. They are:

They were joined by:

It would have been much easier for a panel like this to take a “nothing but blue skies” approach at the beginning of 2020. With more and more consumers demanding an increased focus on wellness and sustainability in the products they put in and on their bodies, the growth curve for the industry appeared to be inexorably rising.

But this optimism was shaken to its core, first by the COVID-19 pandemic and the vast hardships it has caused since March, and then by the civil unrest against racism and brutality following the May 25 death in Minneapolis of George Floyd, an African-American man in police custody.

“It has been a tumultuous week and year. It's clear that we need to transform a culture that has far too much institutional racism,” said moderator Jim Slama—the co-founder of Naturally Chicago and CEO of FamilyFarmed, its parent nonprofit—as he introduced the panel.

Yet the tone of the panel was one of cautious optimism, with hopes that consumers will put a greater emphasis on their health and wellness due to COVID-19, and that American society will move assertively to address the inequities and need for reforms exposed by the George Floyd tragedy.

“The Chinese characters for crisis are composed of two elements. One of the elements is danger and one is opportunity, and there is real danger, to our economy, to health and even the fabric of our society,” Goldman said. “But I think there's opportunity as well.”

We urge you to view the full video of the webinar, which is included at the end of the article. Below are 10 takeaways straight from the expert panelists themselves:

1. Wellness through real food. Smith: "I started Simple Mills about eight years ago after cleaning up my diet and taking out a lot of the processed food and a lot of the sugar and for me it made just a huge difference. I couldn't believe the difference that that great food makes, and so I wanted to help change our food industry and help change what people are eating."

2. Born to run … and run. Seidensticker: "I was experiencing joint pain and I went on a journey to try to figure out how I could continue to run and live a full life well into my 70s ... We discovered that your body really needed like 20 to 40 grams of collagen per day to maintain, repair inside the body … I quickly launched the company at the end of 2013, and we've had explosive growth year over year."

Now’s the time for big fixes

3. Get real. Goldman: "I hope what's happening now is a wake-up call, and all the terrible things that are happening are a provocation that we can't deny facts. We can't deny reality around race, around climate … It's also a time where impact is needed more than ever."

4. Learn From nature’s self-repairs. Wolf: "Earlier in the year was, it was as if Mother Nature just said, “Enough!” and sent us all to our rooms for bad behavior… While we sit here to think about what can we do more for each other and for the planet, we're seeing that impact in the skies clearing, in the water clearing, and things growing, or even just not commuting as much with our headsets on. We're hearing the birds. We have an opportunity to move forward with kindness. more knowledge, and shape a better future"

Adapting to uncertain times is possible

5. Pivoting fast ahead of COVID. Seidensticker: "We launched Vitality [an immunity-boosting powdered drink] and normally a product launch would take probably three to six months. I said, 'O.K. team, let's get this to market in five weeks.' That means entire formulations, sourcing packaging, marketing, and out the door… We had product shipping out the door right when we went to shelter at home and it became relevant."

6. Patience can be a virtue. Wolf: "You just have to remind yourself, it's not a buyer or a consumer, there is a human being with a job and a life. That's just kind of exploded as well on their end, and they're trying to navigate that. So try to be sensitive to where their resets are now and will come. We're in slow motion right now."

7. Wipe the whiteboard clean. Goldman: "The first thing I tell entrepreneurs I work with is whatever business plan you had in January, just rip it up. It's irrelevant. You're trying to build a business in a world that no longer exists and is not going to exist. It's gone. It is a different world right now, and it's not going to be the way it was before."

Get closer to customers who are getting closer to good food

8: Roots (to leaf) movement: Goldman: "I do see more people exploring plant-based diet. We've certainly seen it in sales growth, but I think I don't think the world's going to become vegan overnight and I do think the world and people are certainly examining their diets and saying are there more opportunities for me to have plant-based meals and make that shift."

9. Measuring up. Smith: "We love to really meet our customers where they are and help them along their health and wellness Journeys and help support them in that. At and so we think about how can we support people during this time? ... I think it was Campbell's that shared that one of their top customer service phone calls during this time has been, 'What is a teaspoon.' I loved it because it meant that people who weren't usually cooking, they were getting into the kitchen and trying out new things and learning how to cook fresh foods."

10. Localizing supply chain. Smith: "There's an opportunity to purchase directly from local farmers to help keep them in business during this time. Some of the farmers who are most at risk are the organic farmers. We've been fighting for more organic acreage. We've been fighting to get more organic production out there. Let's not lose that ground. Let's support the people who support us eating well throughout the year."

Brands must consider the cost of potential growth opportunities
Jan 19, 2023