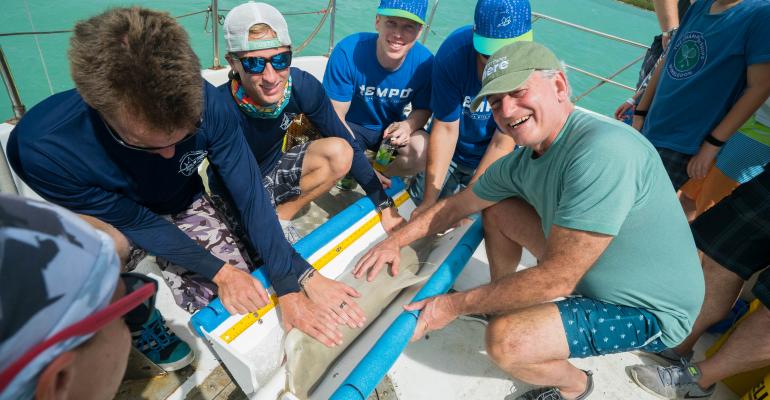 In an electric political climate, how should natural brands participate in environmental activism?

On Dec. 4, 2017, thousands of people gathered outside Salt Lake City’s capitol building, armed with protest signs and chants that signaled a deep love of public lands and a long-simmering hatred for the man about to take them away.

The protesters had convened from near and far to object to the shrinking of two Utah-based national monuments, Bear’s Ears and Grand Staircase-Escalante, by the Trump administration. The reduced acreage would allow private companies to start staking mining and drilling claims in these protected areas.

Despite the protestations, Trump slashed the acreage of Bear’s Ears by an unprecedented 85 percent and Grand Staircase-Escalante by 46 percent—a move that outraged Native American tribes, many Utah citizens and environmental organizations alike. (Following the announcement, the Natural Resources Defense Council, The Southern Wilderness Alliance and Earthjustice teamed up to file a lawsuit to block the Trump administration from revoking Utah’s Bears Ears National Monument.)

In addition to nonprofits, businesses that care about land conservation emerged as some of the strongest dissenters to Trump’s decision. The day of Trump’s proclamation, Patagonia replaced its usual home page of cozy jackets and inspiring images of rock climbers with a striking black and white message: “The President Stole Your Land.”

Since then, Patagonia has emerged as a leader in the land conservation movement. Along with inspiring consumers and other companies to join the cause, the company has attracted the scorn of the federal government. The U.S. House Committee on Natural Resources even tweeted, “Patagonia doesn’t want #MonumentsForAll, they just want your money #BearsEars."

The clothing brand took a fierce stand on environmentalism. Weeks after the Dec. 4 announcement to slash public lands, Chairman of the Committee on Natural Resources Rob Bishop invited Patagonia founder Yvon Chouinard to testify in front of Congress. Chouinard responded with a sharp letter declining Bishop’s invitation, and shared it on Patagonia’s website and social media accounts. “It is clear the House Committee on Natural Resources, like many committees in this failed Orwellian government, is shackled to special interests of oil, gas and mining, and will seek to sell off our public lands at every turn and continue to weaken and denigrate Theodore Roosevelt’s Antiquities Act, which has preserved our treasured public lands for over 100 years,” he wrote. “We have little hope that you are working in good faith with this invitation.”

Should brands take a stance?

Patagonia has long stood for environmental activism. But never has the brand so strongly—and so publicly—opposed an administration. The clothing maker inspired other outdoor companies, such as the retailer REI, to take a similar stand.

The natural products industry is rooted in business for good through better practices. Myriad companies have played a role in sparking groundbreaking and important legislation that makes the industry what it is today. In 2012, for instance, when California was primed to vote on the GMO labeling bill Prop 37, brands ranging from Annie’s and Nutiva to Clif Bar & Co. and Nature’s Path supported the legislation, and donated funds and marketing efforts to the pro-labeling campaign.

Larger brands have agency to participate in contentious environmental issues because they deeply understand their consumer base—nearly everyone who buys Patagonia clothing enjoys participating in outdoor activities and is invested in protecting outdoor access. But the playbook to smartly participate in activism such as land conservation is murkier for small and emerging natural products brands.

Should natural brands play it safe? Or should they take action and potentially lose customers? How important is it for brands to have a corporate social environmental responsibility program?

For Joel Clark, CEO of Kodiak Cakes, a Park City, Utah-based brand that crafts protein pancakes, participating in local land conservation was a clear choice. Last summer, the company joined an effort to save a 1,350-acre stretch of land called Bonanza Flats from resort and golf development by raising funds for their city to purchase it as open space. Kodiak Cakes sponsored a 5K fundraising race and donated $10,000 to Park City. “It’s important for us at Kodiak Cakes to support causes like Bonanza Flats,” says Clark. “We received very positive feedback when we put our foot down for this cause and invested in a successful campaign.”

Most of the Park City community lauded the conservation of Bonanza Flats, as it is a prime location for outdoor recreation such as hiking and trail running. But Clark cautions that small brands should be mindful about choosing projects to support. “When politically charged issues become hotly debated, that’s where we might be more careful. Small businesses tend to feel more vulnerable when taking a stance for these types of issues," he says. "It’s just a matter of deciding when to be careful and when to take a stand."

If natural brands are interested in getting involved in a controversial issue, be prepared, as corporate political activism can be polarizing. “Anytime a business takes a stance, they are going to find supporters and people with opposition viewpoints,” says Jessica Saba, founder of Good Point Projects, a consultancy for socially and environmentally focused companies. “It's important to pick battles that are vital to the operations of the business and contribute resources that can truly help move the cause forward.”

Saba recommends that CSER teams should launch activism initiatives by first consulting trusted experts, lawyers and partners to think carefully about their most valuable contribution to the effort. For example, if a brand has thousands of followers on social media, perhaps consumer education and activation would be the most valuable way it could contribute to the cause. If a brand employs sustainability experts, maybe consulting would be best. “It’s important to know the boundaries of the role the company will play before entering the public sphere,” she says.

For Tempo, a fledgling brand that makes unsweetened sparkling tea, finding an environmental cause to support was a no-brainer. Tempo co-founder Austin Gallagher, PhD, is a biologist who also founded Beneath The Waves, a nonprofit that uses advanced technology to tag and study sharks. In addition to adopting conscious practices such as avoiding plastic materials and using a low-impact manufacturing facility, pairing Tempo’s conservation efforts with Beneath The Waves was a natural fit.

“While Tempo was not specifically formed to fund Beneath The Waves, we’re excited to partner on conservation missions together,” Gallagher says. Because Tempo and Beneath The Waves are so tightly knit, Gallagher believes there’s opportunity to engage consumers in a highly meaningful way. “We would want, for example, to allow our customers to win a giveaway to come out on our boats to tag sharks. We’re trying to have vertical integration in a way we don’t really see in the food and beverage space,” he says.

While most old-school corporate giving models involve gifting funds to worthy organizations—which remains a sterling and vital way to support causes—next-gen CSER is more about storytelling.

It’s about brands being fearless and brave about the causes that are important to them and their customers. The integrity of your product still counts. But messaging and in particular, action, is rapidly becoming a scale by which emerging consumers weigh brand trustworthiness.

Such work often bolsters a brand’s bottom line, too. “Patagonia knows their audience well, and what they've done is created an army of informed, educated consumers who care. It’s new-age environmentalism,” says Gallagher. “That's a story consumers are excited about.”

3 takeaways from Alter Eco on the power of small, environmentally conscious businesses
Feb 06, 2017

Stand out by standing up: The role of mission in business
Dec 27, 2017

Opportunities and challenges in winning over 'green' consumers
Mar 02, 2017