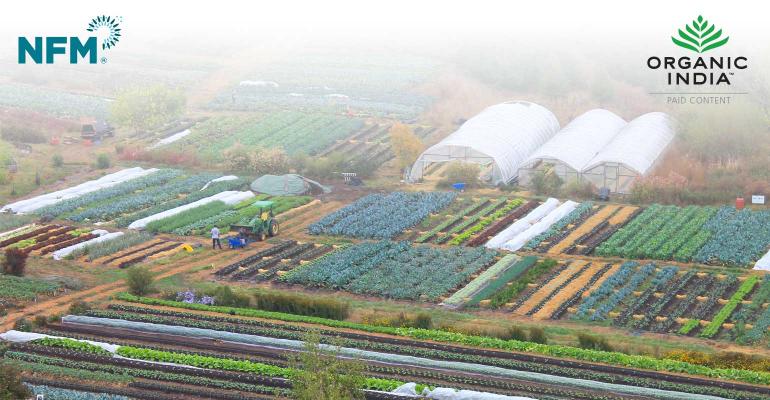 “Regenerative” is the buzzword of today. But what exactly does it mean and are consumers listening?

Both the beauty and sometimes the challenge of the term “regenerative” is that it can adapt to its environment, meaning many things to many people. Although it is firmly rooted in agriculture, it is about much more than that, says Kyle Garner, CEO of Organic India USA. “It’s not just about the soil, the concept of regeneration can be used in business and in communities.”

To Garner, it’s not just a word—it’s a movement. So what’s driving this movement today? “Ultimately, we’ve reached a tipping point,” says Susan Skjei, director of the Authentic Leadership Center at Naropa University. “Sustainability is no longer enough. We can’t just sustain what we have so we’ve got to begin regenerating and that can either lead to despair or to a more positive orientation.”

A positive impact, an emotional connection

The complete circle of organic farming is also showing carbon sequestration and the potential to positively influence climate change. “It has a strong emotional draw to consumers,” says Eric Pierce, vice president of business insights at New Hope Network. “Our focus for so long has been on the removal of negative things, the GMO battle and all of these other things. To have the conversation about regeneration and regenerative agriculture represents such a positive investment that people can make not just emotionally but also with their businesses,” explains Pierce.

The regenerative movement keeps building from the positive outcomes of healthy soil. JI Rodale, who founded the Rodale Institute in 1941, was known to use this as his mantra: “Healthy soil, equals healthy food, equals healthy people.”

“The idea of wanting to use our own spending power as consumers, our own wallets as a way to engage and support the companies we want to support is powerful. And this is just what younger consumers and millennials are doing,” says Pierce. “When we ask consumers if they are willing to pay more for businesses acting in a responsible way, 67 percent of millennials say ‘yes.’ That is 37 percentage points higher than what baby boomers say. Millennials are ready. There is an opportunity now to translate these behaviors that have been cultivated over years into consumer behaviors.” To engage more companies and people, Skjei says to think of the soil in terms of human beings. “We need to enrich that soil and actually allow people to go deeper. A lot of the regeneration movement as it relates to leadership is how to help people develop deeper levels of consciousness to think more systematically.” We can’t do that if we don’t have a support system to do it, because in our society we are oriented to think as individuals, not as a unit.

Yet, companies and organizations such as Organic India, Patagonia, Eileen Fisher and the Rodale Institute, she notes, are focusing on how to create a healthy sustainable culture. “We have to help people tap into the kind of intuitive knowing and the deeper knowing that goes beyond our chit chat and messages we get from society to ask the questions that matter,” says Skjei. The regenerative movement, experts agree, has the opportunity to do just that.

Paid Content
Organic agriculture and its impact on ingredients and the planet – webinar
May 25, 2022