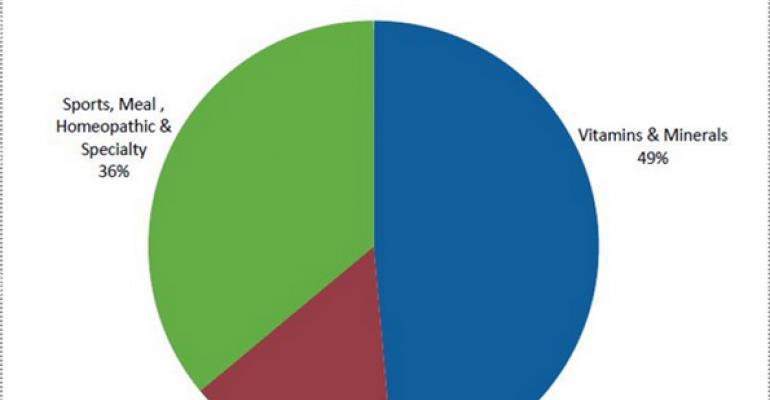 Amid import bans and a struggling economy, supplement market limps along

On August 6, 2014, President Vladimir Putin announced a sweeping ban of “all food and finished food products” imported from the United States and the European Union, a classically Putinesque move in retaliation for sanctions imposed against Russia for its controversial actions in Eastern Ukraine. Fourteen days later, he changed his mind.

Pressured by consumers, Big Pharma, and multinational supplement companies, and realizing how tough local sourcing would be, the Russian government 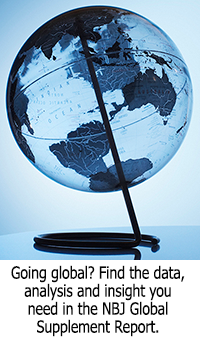 suddenly amended its ban to exclude “dietary supplements; vitamin and mineral complexes, flavor additives, concentrates of proteins, and dietary fiber.” The quick change of heart spared the supplement industry the grim fate faced by European cheesemakers, and U.S. poultry, tree nut, and packaged food companies that overnight lost hundreds of millions in sales. Many a supplement CEO heaved a sigh of relief.

But, while the global supplement market is still alive in Russia, by some accounts, it’s not exactly thriving.

“The political and economic turmoil of the last 12 months has triggered a large-scale crisis across consumer markets, food and dietary supplements being no exception,” says Moscow-based Alexey Petrenko, of international consulting firm EAS Strategies. “The local currency devaluation has almost halved the market.”

That said, he and others predict that the country—the ninth largest population-wise with 142 million people—still holds great opportunity for health and wellness companies willing to wait out the economic storm. It hosts one of the highest cardiovascular disease rates in the world, according to the World Health Organization. More people (10.9 million) have diabetes in Russia than in any country in Europe. Thirty percent of adults there are overweight; 23 percent are obese. And thanks to new efforts to harmonize regulations across countries in the region, it could soon become easier to get products approved for Russia and quickly onto shelves in neighboring countries too.

Petrenko remembers 2014 as a year of dramatic change, with companies facing tough choices. “For newcomers, the question was if it is still worth coming. For market veterans: Should they continue to invest or keep a low profile until better times, or wind-up?” says Petrenko. His advice: take the long-view. 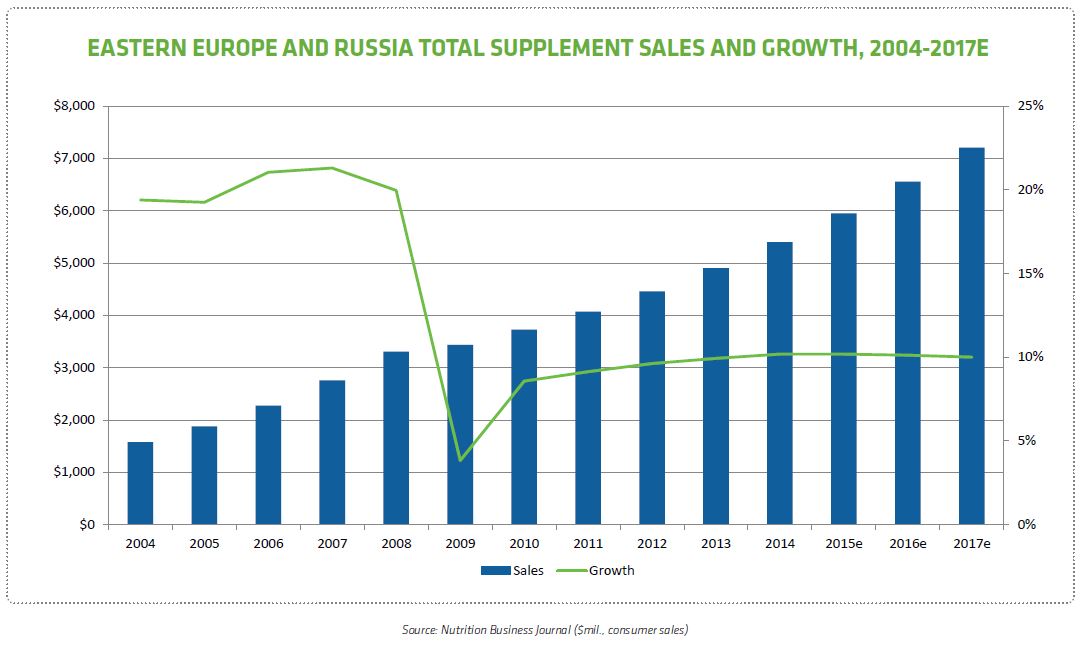 Ever since the wall came down, the Russian supplement market has been on a roll. When the Soviet Union first collapsed in 1991, taking its generous public health care system and prescription drug benefits with it, multinational supplement companies swooped in offering their products as an alternative.

“The key driver of market growth for many years was a distorted and biased positioning of the supplement category as a cheap replacement of drugs,” explains Petrenko.

In 1997, the government established a regulatory framework for what the government calls “biologically active food supplements (BAFS).” In more recent years, it moved to further tighten restrictions to quell a flood of products with overstated claims and labels that did not match their contents. Reassured by such steps, and faced with the same chronic health conditions that the growing middle class in many countries face, consumers upped their spending on supplements. The market boasted a 15 percent compound annual growth rate from 2008 to 2012.

Today, according to EAS, more than 23,000 food supplement products are registered for sales in the region. Just 48 percent are manufactured in Russia. The second largest contributor, with 3,500 products, is the United States.

As the supplement market has matured, growth in Russia has slowed somewhat to about 10 percent, but even that lower rate was predicted to spike sales to an impressive $2 billion by 2016, says Petrenko.

“This however, will not happen,” he predicts. With inflation rates now in the high double digits, and local currency shrinking in value, Russians have reduced their spending on food by 10 percent. Eighteen percent of Russians lack free cash after buying basic items, according to a recent survey by research firm Nielsen.

As of December, 2015, the supplement market “hardly exceeds a billion dollars,” says Petrenko. That’s less than what it was worth in 2005. 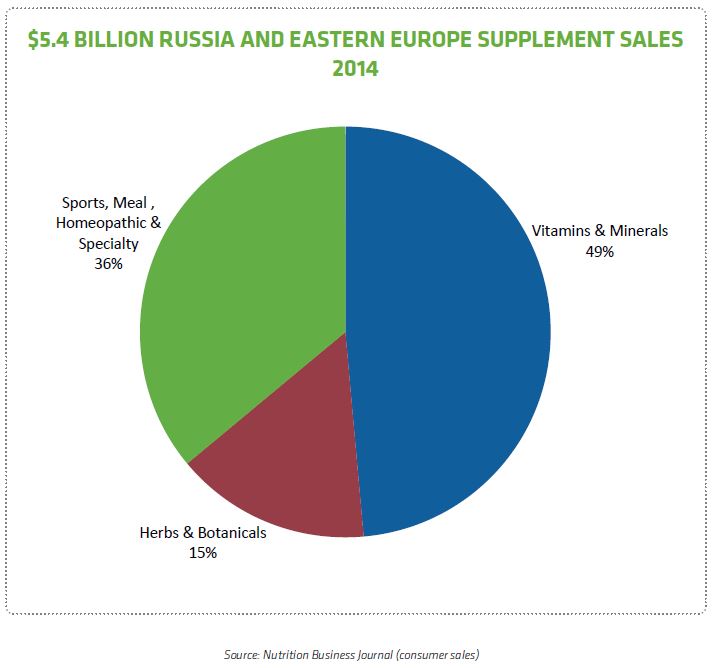 Picture still looking bright for some

For those in the Moscow offices of Herbalife, the picture looks far less bleak. The $5 billion company first put down roots in the country in 1995 and now Russia represents its biggest market across Europe, the Middle East, and Africa, with tens of thousands of independent associates and 50 sales centers across Russia’s 17 million square kilometers. In 2014, the latest year with available data, Herbalife sales in Russia grew 9.7 percent in U.S. dollars. In 2015, as a result of the import ban, it shifted some of its sourcing for protein-containing meal replacement products, considered “food,” to Brazil and China. Still, overall, it was a good year, company officials say. Today, its Formula One Nutritional Shake is the best-selling weight management product in the country, with 15 percent of market share. And Russian consumers, feeling the toll of a traditional diet high in carbs and low on lean protein and veggies are looking for solutions. According to Euromonitor, sales of weight management products rose 11 percent in 2015, and sales are expected to continue to grow.

“The market is fairly new. It is not mature at all, and the awareness and demand for good nutrition continues to grow. There is great potential,” says Edyta Kurek, vice president of Russia and CIS for Herbalife. “There is still a big gap between what is manufactured here and what is needed.”

Herbalife spokeswoman Irina Shevchenko adds that for some cash-strapped Russian consumers trying to lose weight, meal replacement products can actually be cheaper than fresh, healthy food. “In this tough year of economic crisis, the weight management program of Herbalife can help them save money,” she says.

Meanwhile, Amway is also holding its own. Opened in 2005, Amway Russia posted sales of 18,85 billion rubles by 2014 ($263 million U.S.). “Amway expected some success in Russia, but not necessarily to the extent we have experienced,” an Amway Russia spokesperson told NBJ. Russia is now the company’s sixth-largest market, with 16 trade centers in 14 cities and about 1 million Amway Business Owners.

Its most popular categories are home care products (37.3 percent) followed by personal care products, with supplements at a surprising third place (17 percent of sales) and showing encouraging room for improvement. “The demand structure in Russia is different. Our supplements are consistently the best-selling products in other countries,” she says, noting that Russians are not yet “deeply aware of the benefits of supplements.”

Analysts from Nielsen and Euromonitor predict that once the economy recovers Russia will be fertile ground for growing the supplement and healthy food market. “Russian consumers are following the global healthy trend, but they are just under severe pressure to save money right now,” says Moscow-based Ekaterina Lukina, of Nielsen.

Euromonitor, while acknowledging slowing growth of the Russian market, points to several bright spots, including fish oils, which grew 17 percent in 2015, and probiotics which account for 28 percent of sales of “non-herbal/traditional dietary supplements.”

Petrenko is also optimistic that a turn-around is ahead. Pointing to “clear signs” that the recession may wane next year, he predicts that by 2017 the market will have rebounded to 2014 levels “provided the political situation does not deteriorate.”

And the 2014 establishment of the Eurasian Economic Union–a collaboration between Russia, Belarus, Kazakhstan, Armenia, and Kyrgyzstan—could ultimately make it possible for companies complying with Russia’s standards and regulatory processes to do business in all these countries.

“Are there any opportunities left in this tough market environment?” Petrenko says. “The answer is yes.” 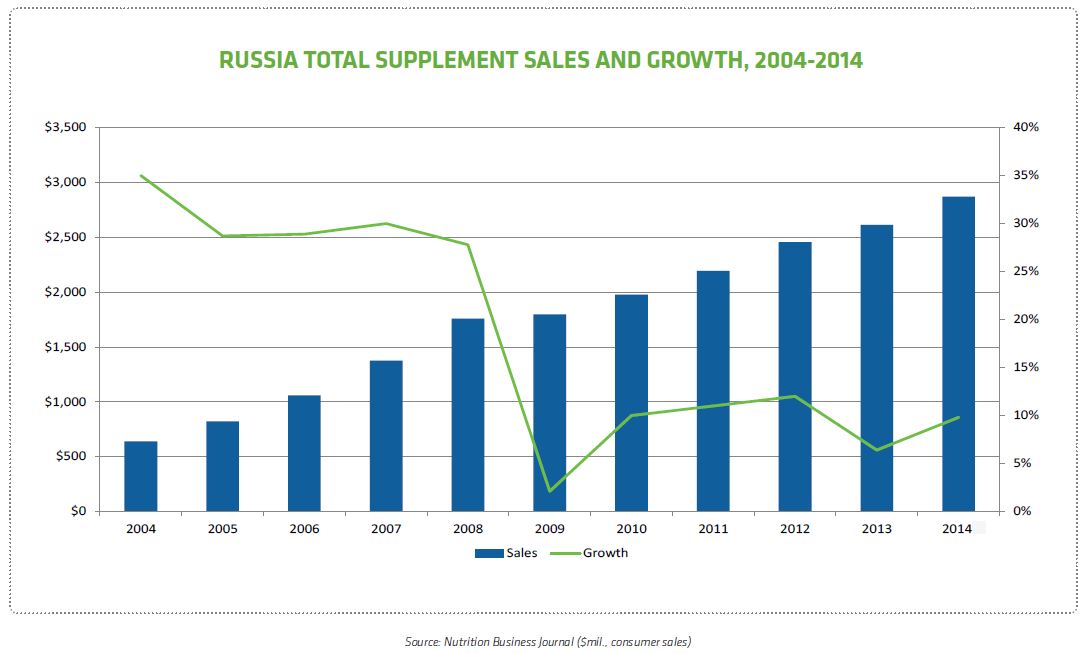