HomeNewsOmega-3 turbulence down under
Recent
Latest
Mission MightyMe helps parents introduce allergens to babies
May 20, 2022
UNFI's Eric Dorne to step down as chief operating officer
May 20, 2022
The Analyst’s Take: Top takeaways from NBJ’s Sports Nutrition and Weight Management Report
May 20, 2022
How nutrition companies can keep up with rapid pace of changing tech
May 20, 2022
Trending
Whole Foods' honors 30 companies with 10th annual Supplier Awards
May 18, 2022
Sponsored Content
The rise of sustainable business – eGuide
Sponsored Content
Getting ready for 2023: Trends for brands to consider
May 17, 2022
Sponsored Content
Debra Stark’s light shines bright on natural products industry
May 10, 2022
NBJ
brought to you by

Omega-3 turbulence down under 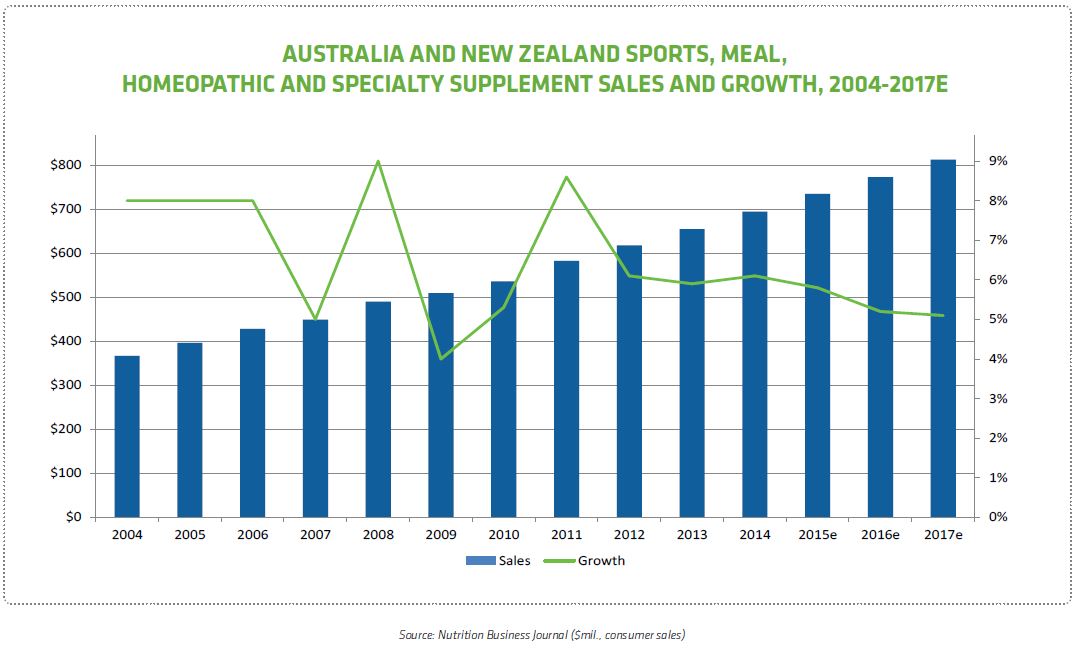 Then things got complicated.

Over the last decade, consumer demand increased as more Australians recognized the oils for increasing joint and cardiovascular health. But prices plummeted as the handful of dominant brands resorted to discounting as the primary marketing strategy. Another fluctuation came in the last three years, with manufacturers switching from Peruvian anchovy to Antarctic krill as the primary oil source.

According to research conducted by Euromonitor International, Australian consumers bought $225 million worth of these products in 2014. But purchases of oils from krill dropped 28% from 2013, according to research done by the Global Organization for EPA and DHA Omega-3s (GOED).

“There’s really only two or three key brands at retail,” says Ellen Schutt, communications director for GOED. “You don’t see too many finished product companies coming into the market.”

But these ups and downs seem like mere ripples compared to the tidal wave the industry faced down earlier this year.

In January 2015, New Zealand’s University of Auckland dropped a bombshell on the industry. A study conducted by the university’s Liggins Institute found that many Omega-3 products actually contained far less of the valuable oils than advertised on the bottle. Of the 32 fish oil supplements that were analyzed for EPA and DHA content, the researchers claimed just three contained the advertised amount. The average was just 68% of claimed content.

Australia and New Zealand’s largest newspapers picked up the report, which was soon echoing across the blogosphere. Researchers stated that the low concentrations were caused by oxidation, and exceeded three important thresholds of oxidation: the Peroxide Value (PV), the p-Anisidine Value (pAV) and the Totox threshold. More than 80% of the samples surpassed these thresholds in some way, the study says.

Oxidized fish oils, researchers says, could actually create fatty deposits in arteries, thus reversing all of the cardiovascular benefits that Omega-3 products are known to have.

“The active ingredients of fish oil are fragile, and if they’re exposed to oxygen, to light, to increasing temperature above freezing, they will degrade,” one of the researchers told the Sydney Morning Herald.

New Zealand’s Ministry for Primary Industries launched an investigation into the findings. The executive director for Natural Products NZ, the country’s industry group for natural products, called for an increase in manufacturing regulations.

Marketers and industry representatives flew into a frenzy. The report had the potential to damage trust and derail their lucrative industry. Usage of Omega 3 products is unusually high in Australia’s natural supplements industry, which recorded $2.9 billion in annual sales in 2014, according to the Omega-3 Centre in Sydney. A recent study by GOED found that approximately 60% of adult Australians consume the products in supplements or fortified foods.

“It was hugely frustrating—we knew the media would take the study and run with it without doing any fact checking,” Schutt says. “In most cases, we aren’t finding out about these studies proactively, so we have to take a reactive stance.”

The study, however, did not pass the sniff test with the industry. The TGA is famously rigid with quality control demands on Australia’s nutritional supplements manufacturers. So how could they allow bad practices like this to flourish?

Recent research into Australia’s Omega 3 products had failed to turn up anything fishy. In 2014, Australia’s Commonwealth Scientific and Industrial Research Organization had released a report on farmed vs. wild-caught salmon, and the report included concentration tests on Omega-3 supplements. An additional study from that year on toxicological and nutritional value of supplements derived from krill and fish also showed consistent concentrations within Omega 3 supplements.

Terri Albert, executive director of Australia’s Omega-3 Centre, says the study created an “inordinate amount of concern” within companies and Omega-3 industry groups, including her organization and GOED. In the weeks following the study’s publishing, representatives from the Omega 3 Centre and GOED began brainstorming a strategy to challenge the report.

“There was work to initiate and facilitate a testing regime that could scientifically prove to negate the studies,” Albert says. “It generated working collaboratively.”

Both groups saw problems with the research methods used by the university. In January, GOED released a news alert calling into question the study. GOED’s release criticized the scientists for their research and publicity methods. The university had given the industry no opportunities for a peer review of the study, it argued. The researchers’ methods did not follow the accepted processes of the American Oil Chemists’ Society or of the European Pharmacopeia. Perhaps most importantly, the oils used in the experiments came from capsules. Poor handling of capsuled oil, they argued, could create high oxidation rates due to the long exposure to air.

And the study did not state whether the products contained fragrances, which some believe can skew tests on DHA and EPA content.

“It seems like the authors were using a [testing] method that yields incomplete results,” the news brief stated. “It is unclear whether the authors’ method was validated.”

The TGA also investigated the findings of the study. In early summer, TGA researchers surveyed 15 different fish oil products for sale on the Australian market, and conducted tests for oxidation and Omega-3 content. Of the 15 products, four showed signs of increased oxidation. But all four of these products contained excipient fragrances, which the TGA stated could skew test results. All 15 of the products, however, had Omega 3 content that was within 90% of label claims.

On the heels of the TGA’s tests, GOED and the Council for Responsible Nutrition produced a white paper titled Oxidation in Omega-3 Oils: An Overview. The white paper unabashedly targeted the health claims raised by University of Auckland study concerning oxidized oils. The white paper stated that, based on ongoing clinical trials, oxidized EPA and DHA oils have no negative health effects. Furthermore, the paper stated that flavor additives often disrupt oxidation tests.

Most recently, the Omega-3 Centre produced a summation of the events in its latest newsletter, which members have yet to receive. The report, written by the group’s scientific advisor, Dr. Peter Nichols, chronicles the 12-month process after the publishing of the report, including the back-and-forth dialogue between industry representatives and researchers from the University of Auckland. While the researchers stand by their study, the Omega-3 Centre’s letter says that it will continue to contest the results.

“The industry, GOED and the Omega-3 Centre will likely go back to the publishing journal and seek a retraction, or at the very least, a published letter explaining the new results,” the letter reads.

And what of sales?

Neither GOED nor the Omega-3 Centre has published sales data from 2015, but both groups says that they have yet to see a major slowdown in sales. Albert says the lion’s share of the group’s communication was with manufacturers and distributors, not consumers. But the mainstream retailers of Omega 3 products, which account for the lion’s share of overall sales, did not stop carrying the products.

Australia’s market for fish oil will likely continue to ebb and flow, but industry groups feel that a major disaster has been averted.