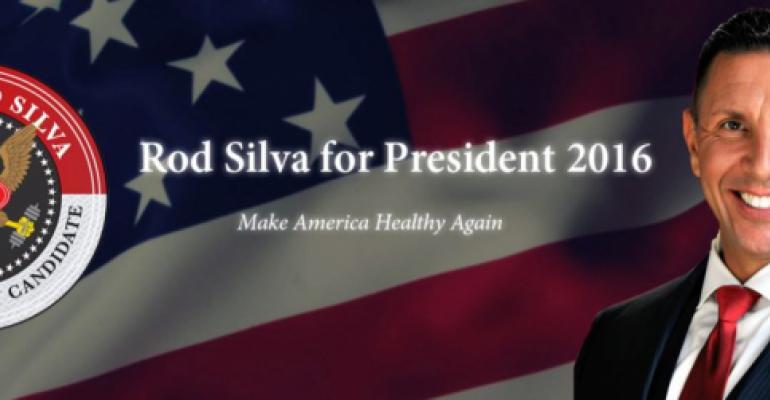 New Jersey resident Rod Silva is running for president on the platform of better nutrition, but the distant-third party candidate pushes the issue further into the fringe.

The history of no-chance presidential campaigns is colorful to the point of occasional hilarity (Ross Perot was a parody? Right?), but that pointlessness can carry unintended consequences.

That might be the case with New Jersey restaurant founder Rod Silva’s campaign.

Related: A look at the ag policy platforms for both parties

Silva is running for the nation’s highest office with a self-anointed nomination from “The Nutrition Party” and a platform that points to bad nutrition habits as the number one problem facing Americans. Silva may have his heart, and his fork, in the right place—obesity-related diabetes is only one of a host of lifestyle-related health problems burdening the country’s healthcare and finances—but campaigns and political “parties” like his don’t do much for actual nutrition. It's especially unhelpful because this is little more than a stunt for his restaurant franchise than a legitimate cause.

Even without the craven marketing scheme, Silva's campaign and similarly strident statements can make the nutrition industry and supporters of healthy eating look like like hysterical ranting. Good nutrition should be high on everybody’s priority list, whether or not they are in politics or the grocery aisle, but Silva’s supposed campaign sounds more ridiculous than realistic. It does, however, raise the question of how to put nutrition issues into politics without turning it into a pointless feud. When Michelle Obama championed better nutrition and healthy school lunches, it turn into a partisan grudge match. Taking guns away from the NRA groups would be a tiny scuffle compared to taking away American’s right to spare ribs.

We’re not sure what would give better nutrition to “War on Cancer” status, but it’s not ridiculous sideshows like Silva’s.