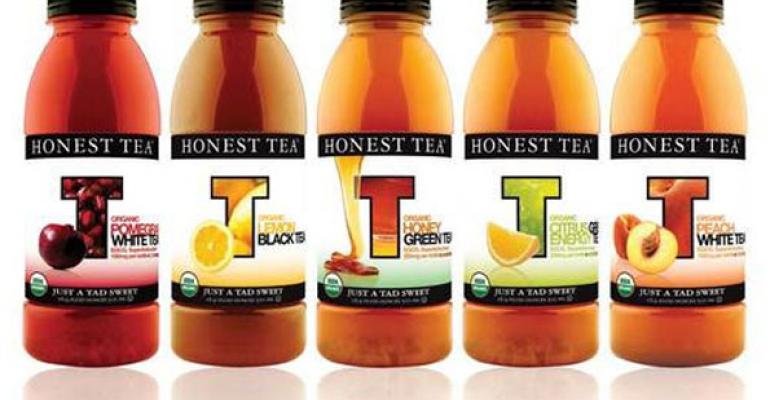 The CEO of the organic tea company explains how it's expanded into a $150 million business without losing sight of its mission.

Seth Goldman co-founded Honest Tea with his college professor Barry Nalebuff 18 years ago with an idea to sell lightly sweetened bottled tea that had less sugar than other options on the market but still tasted delicious. Now the company sells about $150 million in beverages a year, and all its teas are organic and fair trade. Oh, and it's owned by Coca Cola.

When the soda company took a 40 percent stake in Honest Tea in 2008, and subsequently bought it in 2011, some wondered if the Honest Tea would really be able to stay true to its roots. But in Esca Bona's Food Disruptors Webinar Series (watch the replay here), Goldman said the partnership has allowed the company to stay focused on its mission while expanding its distribution from about 15,000 outlets in 2008 to more than 100,000 today.

"There has never been a moment when we have proposed increasing the price of our [chosen] ingredients that we've ever had pushback from Coke," he said. In fact, some of

the cost savings achieved by being part of a bigger company's buying group has allowed Goldman's team to make deeper investments in the supply chain. "The fact that we can overdeliver on growth, on margin and on operating income basically renews our license to continue to grow the business as we prefer to grow it," he said.

Here are some of Goldman's keys to success while maintaining mission:

Never stop innovating. Scaling distribution was a key part of its acquisition, but Honest Tea continued to focus on improving its products, too. In 2010, it converted all of its teas to fair trade. In 2012, it began using only fruit juice to sweeten Honest Kids drinks. Last year, it moved to using fair trade sugar. Even products that didn't work out - like its short-lived foray into kombucha in 2010, for example - have often inspired other ideas, Goldman said.

Whatever product you make will have an impact. Choose what impact you want to have and fight for it. Honest Tea's deal with Coke was driven by its desire to democratize organic. By growing its organic business, it's also supporting and helping grow the organic supply chain. Last year, Honest Tea bought 6.5 million pounds of organic ingredients. "We do get outreach from communities with interest in working with us, but we tell them we're only going to look at it if it's organic. So if they really want to be our supplier, they'll start the conversion process," Goldman said.

And while tea leaves are a cheap commodity, growing them is very labor intensive. "Organic is important, but we better make sure we're investing in communities and their futures," he added. "Those were things that made rational sense for the business."

Especially as part of a bigger company, it's important to have third-party verified standards. Over the years, Honest Tea has put increasing emphasis on fair trade certification and USDA Organic.

Small can make a difference. Large corporations rarely drive change on their own, Goldman pointed out. Rather, they adapt to consumer behaviors. Coke wanted to invest in Honest Tea because it saw that the company was thriving at the intersection of health and wellness, environmental consciousness and social responsibility, which it expected would become a new standard for doing business.

Be different - very different. "If we just came out with another organic tea, maybe we could claim there was a role for us on the shelf, but when we could come out with something that had one-sixth of the sweetener of the other products on the market, it was clearly a different space we could occupy," he said.

Money can't always buy success. Build something you believe in and make it your life's cause. "Do it with purpose and with passion," Goldman said. "People often equate money and resources with possibility, but it's really about creativity, imagination and perseverance." Honest Tea did raise money - about $10 million over its first 10 years in business - but Goldman said it was never too flush with cash. "Frankly that was a good thing, because we had to be creative in how to connect with consumers and find different ways to get our message out."