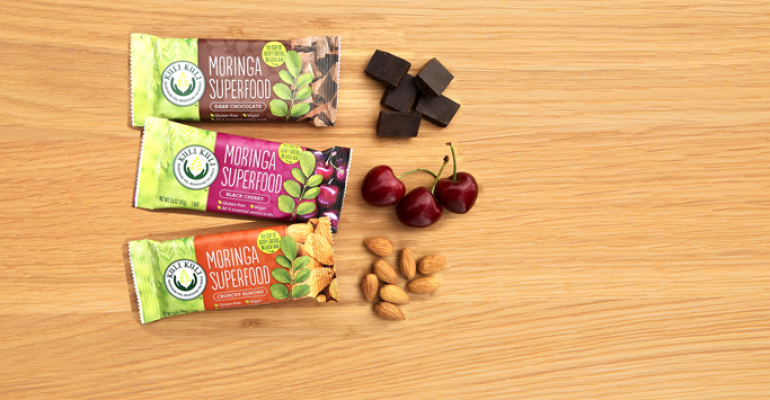 With newest funding, the California-based B Corp. also plans to scale its products and make moringa foods a household staple.

Kuli Kuli, based in Oakland, California, announced Thursday that it closed its Series B financing, which will help the company launch a new ingredient business and expand the use of the superfood moringa.

Similar in taste to matcha, moringa is a versatile ingredient that adds a complete protein, an array of vitamins and health benefits in commercial applications from savory to sweet, producing delicious, nutritious and highly functional foods.

Griffith Foods plans to include moringa in its range of ingredient offerings for the company’s foodservice customers, processors, retailers and distributors across 30 countries.

In addition to launching the ingredient business, the funding will allow Kuli Kuli to continue scaling its moringa powder, bars and shots business.

Similar to the rise of matcha and turmeric, Kuli Kuli executives believe that moringa will soon be found in many products from beverages to desserts.

Over the past five years, Kuli Kuli has pioneered moringa in the United States, building a sustainable supply chain of small moringa farmers while selling tasty moringa products in 7,000 stores.

Kuli Kuli and Griffith Foods will be showcasing moringa food and beverage products March 7 through 9 at Natural Products Expo West. Kuli Kuli’s booth is 5173, located in Hall E (the basement) of the Anaheim Convention Center in Anaheim, California.

“After Eighteen94 Capital led Kuli Kuli’s Series A financing in 2017, Kuli Kuli’s retail business tripled. We’re thrilled to continue to partner with Kellogg to grow our retail business while partnering with Griffith Foods to expand into the foodservice and ingredient space,” said Lisa Curtis, Kuli Kuli’s founder and CEO.

“Griffith Foods’ purpose, that ‘we blend care and creativity to nourish the world,’ calls us to find innovative solutions to changing needs. We also know that Griffith Foods cannot do this alone,” said Brian Griffith, executive chairman of Griffith Foods. “Our strategic partnership with Kuli Kuli will help both companies elevate moringa as an exciting new ingredient, and we look forward to bringing this sustainable and healthy offering to the food sector.”

Kuli Kuli was Eighteen94 Capital’s first investment in January 2017. Kellog Co. established the venture capital fund, which is dedicated to investing in startups, in June 2016. Eighteen94 led the $4.25 million Series A round, while two other investment firms participated.

Moringa is now the fastest-growing green supplement in the category, outselling matcha and catching up to spirulina and wheatgrass.

Nielsen data show that moringa has achieved a 3 percent penetration in U.S. households, with Kuli Kuli dominating more than half of the U.S. retail moringa market.

Kuli Kuli officials expect moringa to soon catch up to the popularity of turmeric, which is now an $11 billion dollar market in the U.S. According to the NEXT Trend database, moringa grew 460 percent between 2014 and 2017.