Ad-fail: Lunchables as the Scarlet Letter of the lunchroom 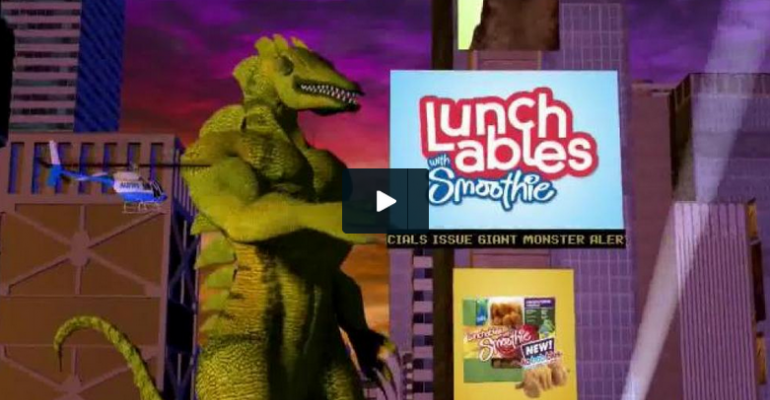 Each week,&nbsp;NBJ&nbsp;Senior Editor Rick Polito examines a food/nutrition commercial for accuracy and idiocy. This week: Would you feed your kid a Lunchables smoothie? See a spot ripe for a takedown? Email [email protected]

There are so many dangers we need to protect our children from: accidents, bullying, online predators, Jenny McCarthy... But all of those things are, for the most part, amorphous. Dangers can’t be put in little boxes and packed away.

Except for Lunchables. They come in boxes.

Lunchables -- the lunch bag badge of shame, the fat and sugar sodium bombs that cause nutritionists to cringe and teachers to whisper “Oh, one of those parents.”

With such a reputation, a Godzilla stand-in and a giant robot destroying a city to advertise the new “Smoothie Kabobbles™” line seems almost appropriate. “All this city stomping is making me hungry!” the giant reptile declares. So only monsters would eat Lunchables? We thought it was only monsters who fed them to their kids.

Until now, we assumed Lunchables were happy destroying children’s health. Does urban devastation take it up a notch? The monster and robot do not seem particularly threatening, phoning it in more than a real rampage, but the backstory behind their partnership may be intriguing. Where did they meet? Why are they lashing out? Why can’t society accept that a robot and a monster enjoy a deep, platonic relationship?

Of course, the scary thing is actually the food. The smoothies might be less frightening than Oreo cookies (a longtime Lunchables staple), but are they more insidious?

Let’s skip the Kabobbles™. I’m no scientist, but I don’t trust any food that needs a “™.” If the smoothies are a step in the right direction, Lunchables still has many thousand more steps to atone for almost 30 years of the wrong direction. Fresh into their nutritional nightmare merger, Oscar Mayer and Kraft unveiled Lunchables in 1988 because, apparently, those little cheese and cracker blister tubs weren’t gross enough. The uber-packaged non-meals survived low-fat, low-carb, high-protein and whatever nutritional advice fell in and out of favor across four decades. Now, you’ve got combos like “BBQ Chicken Shake-Ups,” the less exotic “Lunchable Snack Duos,” or, for those living large, “Lunchables Uploaded,” which the company packs with “more of the stuff they love.”

That stuff they love happens to include an “Ultimate Deep Dish Pizza With Bacon.” Don’t worry. It’s a more rounded meal than that. They also get the Oreos and Kool-Aid.  A parent might be better off packing a slice of cold pizza and a cigarette. Lunchables – a foundation block in the Food Pyramid from Hell.

The smoothies actually knock a few chips off that block. No added sugars and only eight ingredients almost make up for the mysterious “natural flavors” and the ascorbic acid. The smoothies come in a little pouch ubiquitous in the natural channel, so it even decreases the packaging for the most packaged food product since General Mill’s failed “Individually Wrapped Cheerios” launch. Let’s face it, the smoothie isn’t a piece of fruit, the kind that comes in its own packaging right off the tree, but it’s a step up from that Kool-Aid.

So why advertise it with monsters on a death rampage? Because nothing will ever make Lunchables look like a healthy option. Most responsible parents plot their route through the grocery store to avoid the Lunchables case, because they know the children will be drawn to the little boxes of evil like moths to a flame (if the moths were kind of pudgy and the flame was a TV showing SpongeBob). This is a kid-driven “Meltdown In Aisle Nine!” purchase. It can’t be a rational decision. Can it?

The team at Lunchables obviously knows they can’t sell the product on nutrition. Sure, they put “15g protein” on the front of the package, but they are not selling to people who will ever turn that package over to look at the back. We can only hope that a few parents see their kids slurping on something with real fruit in it and get the bright idea of throwing an apple or a banana in a bag with some lunch that’s not encased in hard plastic.

Protecting them from McCarthy is easier. Just cancel that Disneyland trip.