HomeProducts and TrendsBread innovators focus on whole grain, fiber
Recent
Latest
EXPO VIDEO: How did a young sparkling water brand get licensing deals with Marvel and Disney?
May 16, 2022
Beyond Meat's product launches lower Q1 profits
May 16, 2022
Sponsored Content
Exploring the CBD gummy revolution – article
Moonshot Snacks at the forefront of eco-friendly food innovation
May 13, 2022
Trending
Debra Stark’s light shines bright on natural products industry
May 10, 2022
Monitor: Consumer research on collagen shows how much education is needed
May 12, 2022
Hemp CBD industry struggles so far in 2022
May 10, 2022
Chilean retail group acquires majority stake in The Fresh Market
May 12, 2022 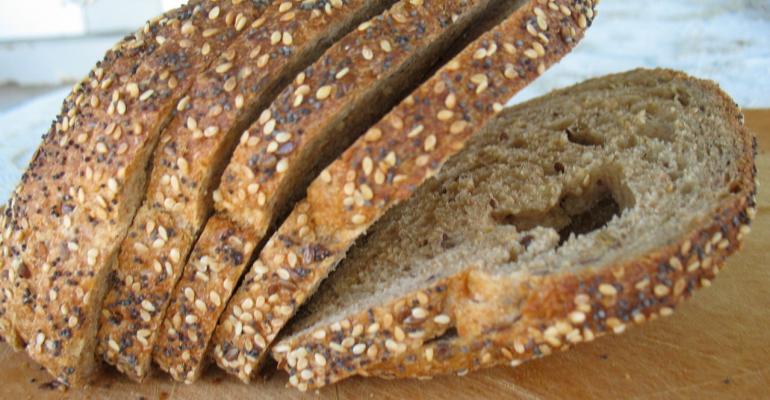 Bread products using health claims made up more than 42 percent of total bread launches in 2013.

Tracked bread launch numbers have generally continued to rise globally and within that products using health claims of some kind made up over 42 percent of the total in 2013. This does vary regionally, however, rising to over 75 percent in the U.S. and Australia and 70 percent in Latin America, but falling to less than 30 percent in the nontraditional bread markets in Asia.

Lu Ann Williams, director of Innovation at Innova Market Insights, reports that: “As a result of the growing influence of health claims regulations, particularly in the EU and North America, the functional bread sector has generally seen much lower levels of new product and promotional activity over the past few years.”

“This does not mean that interest in healthier options has reduced, however, but more that the positioning of bread has changed to focus more on a generally healthy and nutritious image, rather than making specific claims,” she adds.

Innova Market Insights divides health claims and positioning into two types – passive, such as low and light, organic, gluten-free, etc., and active, which involve the addition of particular ingredients, such as calcium, protein, fiber, etc., or the promotion of specific benefits such as heart health or digestive health. Globally, passive claims dominated in the bread market, with over 40 percent of launches using them in 2013, compared with just 5 percent using active claims of some kind. Again this varies regionally, with over 11 percent of launches using active claims in the US, compared with 6 percent in Asia and 3 percent in Europe.

The most popular health claims in the bread market overall referred to naturalness, with one-fifth of 2013 launches using one or more claims relating to naturalness, an additive- or preservative-free formulation or an organic positioning. Nearly 17 percent used either high-in-/source-of-fiber claims or a wholegrain positioning. In terms of active health claims, usage was much lower, with the most frequently used being vitamin and mineral fortification, featuring on 1.5 percent of launches, ahead of omega-3/DHA fortification and heart health, with about 1 percent each.

The U.S., with its mature and highly competitive market looking for differentiation and its ongoing consumer interest in health, had an even higher level of interest. Over one-third of tracked launches used claims relating to naturalness and a similar percentage utilized fiber/wholegrain claims. U.S. consumers continue to focus on healthier breads, fortified with healthful ingredients or featuring reduced levels of sodium, sugar and fat. Wholegrain products have continued to grow in popularity and the use of ancient grains is also continuing to increase.