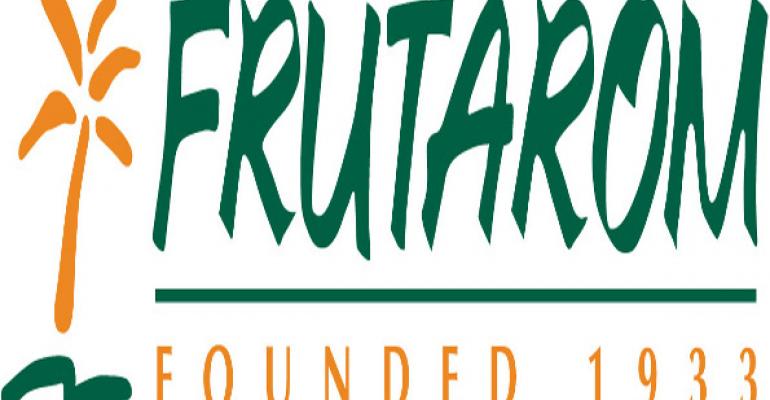 Frutarom, one of the 10 largest flavor and fine ingredients companies in the world, reports record results in quarterly revenues for Q1 2013 in gross profit, operating profit, EBITDA, net profit and in earnings per share compared with first quarters of previous years, despite challenging market conditions in the global economy in general and in Western and Central Europe in particular.

Implementation of Frutarom’s rapid growth strategy, successful integration of acquisitions made over the past two years, including unification of R&D, marketing and sales infrastructures and increased use of innovation are shown in Frutarom’s results of activity; however, the main contribution to the Company’s results is expected to be seen over the course of the coming quarters.

The processes of integration of acquired acquisitions into Frutarom’s global activity, including continued integration of production sites and transfer of activities to countries where operational costs are lower, are expected to secure additional significant savings in a yearly scope of US$10 million, which will begin to come to fruition already in the first half of 2013, and mainly in 2014. At the same time, Frutarom is expected to enjoy continued improvement in gross margin in light of the strengthening of its global purchase infrastructure.

Frutarom continues to successfully implement its rapid profitable growth strategy, which is expected to continue triggering internal growth, along with focused implementation of additional strategic acquisitions and accelerated expansion into markets with higher growth rates, such as the emerging markets of China and South East Asia, Central and

South America, Eastern Europe and Africa. The growth trend in emerging markets has continued in this first quarter of 2013 as well, and is expected to continue throughout the year and next year.

Frutarom continues to invest in further rapidly growing its Flavors’ activities in the United States, the largest market in the world for flavors, which grew by 43 percent in 2012. In Q1 of 3102 accelerated internal growth in the American market continued, and is expected to continue throughout this year and next year.

Gross profit in Q1 2013 increased by 4.1 percent, reaching US$57.2 million compared with US$54.9 million in the same quarter in 2012. Gross margin increased, reaching 37.6 percent, compared with gross margin of 36.3 percent in Q1 2012. Gross margin, net of the trade & marketing activity, not one of Frutarom’s core activities, reached 38.4 percent compared with 37.2 percent in Q1 2012. The improvement in gross profit is the result of utilization of synergies deriving from the acquisitions made by the Company and maximization of increased purchase power from the Company’s recent acquisitions.

Ori Yehudai, president and CEO of Frutarom, stated that “The first quarter of 2013 expresses the continuation of the manifestation of our rapid profitable growth strategy, which we have been successfully implementing over years. Frutarom has been successful, and in line with its business plan it will continue to improve its profitability, as the result of strengthening and streamlining its research and development, marketing and sales, purchase, supply chain and manufacturing infrastructures, alongside continual exploration of additional strategic acquisition opportunities.

“The past few quarters have brought to fruition a number of strategic processes which the company has been implementing and whose main affect is expected to be felt over the next few quarters, including an increase in the proportion of the Flavors activity segment out of total Company sales, with a focus on the increasing demand for natural flavors; an emphasis on unique, innovation based solutions combining taste and health; continued accelerated internal growth in the American market, considered the largest market in the world for flavors and an important growth engine for us for the next few quarters and years; continued growth and an increase in the market sector in emerging markets, utilizing business opportunities such as the acquisition of the South African JannDeRee, which we recently announced, and which is expected to accelerate Frutarom’s growth in the growing region in Africa; and strengthening our competitive advantage through building up our global purchase infrastructure.

“The contributions of these activities have allowed us to present 24 percent growth in 2012, with an EBITDA which has crossed the 100 million dollar line and net profit of 52 million dollars. The growth in North America and in emerging markets has continued in the first quarter of 2013 as well, and is expected to continue. It is also our intention to persevere with the realization of the many cross-selling options we have gained through our acquisitions, along with increasing the contribution of realization of streamlining processes and improving of our cost structure. Over the last few months we have continued with the integration of the R&D infrastructures, which will position Frutarom at an even better starting point in the competition on market segments, both in the large multinational segment as well as in the provision of unique solutions for medium size and local customers in developed and emerging markets, with an emphasis on private label customers.

“Frutarom’s equity structure and net debt level, supported by the cash flow it attains, will allow us to continue to realize our rapid profitable growth strategy through further strategic acquisitions, which will continue to strengthen our position as one of the leading companies in the world in the flavors and fine ingredients industry”.