HomeProducts and TrendsFood and BeverageAre natural, alternative sweeteners any better than sugar?
Recent
Latest
Sponsored Content
How brands can get their trade spend under control – article
Sponsored Content
Going organic lifts everyone up – video
6 natural brands partner with UNSTUCK on new product line to aid refugees
Jun 23, 2022
Sponsored Content
The power of organic messaging – download
Trending
Getting ready for 2023: Trends for brands to consider
May 17, 2022
Unboxed: 7 clean collagen powders with a twist
Jun 21, 2022
12 brands marketing positivity, kindness and joy
Jun 17, 2022
Coca-Cola axes Honest Tea, but its founders are just getting started
Jun 07, 2022

Are natural, alternative sweeteners any better than sugar? 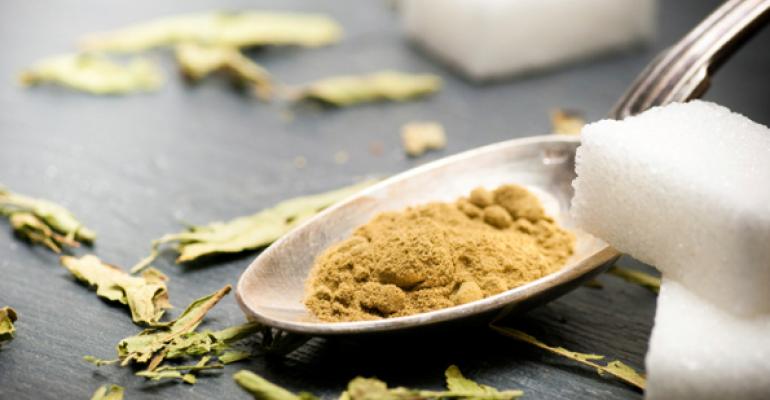 Many natural products are giving sugar the boot, but what if sugar&#39;s replacements (such as stevia or agave) aren&#39;t much better? Here&#39;s why some experts say our taste buds need an overhaul.

Sugar, the public health crisis that won't go away, would be an easier problem to solve if the answer was simply to replace or eliminate sugar from the American diet. But, it turns out, another factor's at play: reprogramming our palates' penchant for sweet foods—natural, alternative sweeteners, included.

"In the U.S., we tend to formulate things sweeter than other parts of the world," said Mary Mulry, president of Foodwise, a food consultancy. "If we keep formulating no-calorie products just as sweet as fuller-calorie products, we aren't teaching people to cut back on sweetness, in terms of palate. Rather than focusing so much on no- or low-calorie, maybe we should be focusing on developing products that just taste good—but are only moderately sweet."

Weaning consumers off their sweet tooth might, one day, be viewed as a matter of public health, says Kantha Shelke, PhD, principal of nutrition think tank Corvus Blue LLC.

"Could there be a correlation between consuming high‐intensity sweeteners with the growing incidence of cataracts and joint failure?" Shelke asked. "Our bodies and our physiologies have not evolved and kept pace with advances in food science and technology.

"When your brain registers a rush of sweetness associated with products containing high potency sweeteners, it is designed to compute the caloric/carbohydrate implication of that sweetness and therefore releases insulin. If there is no sugar for the insulin to interact with, it is very likely that it will seek other readily available forms of sugar in our systems. Sugars are an essential component of joints and the eye,s and it is conceivable that an unintended consequence of routinely consuming high potency sweeteners may be the growing incidence of health issues as a result of excess/erratic insulin in the body," she said.

How non-nutritive sweeteners 'trick' the brain

As reported on TV's 60 Minutes segment in April, consuming sugar causes insulin spikes which can serve as a catalyst to fuel as many as a third of common cancers, including breast and colon cancers. Lewis Cantley, Harvard Medical School professor and head of Beth Israel Deaconess Cancer Center, explains that these tumors have insulin receptors that bind circulating blood glucose and signal the tumor to grow.

Cantley discourages our sweet cravings in all its forms—even non-nutritive sweeteners such as stevia and erythritol. “Non-nutritive sweeteners should not directly cause insulin resistance as they don't get converted to fat in the liver. However, they almost certainly play the same trick on the brain as fructose does, leading the brain to dis-correlate the total consumption of sweetness as a mechanism of satiety."

"There are certainly studies in rats that support this idea. Ultimately, one will consume much more carbohydrates (and crave even more real sugar). So the result will likely be obesity and insulin resistance, potentially increasing the risk of cancer,” he said.

So how do those alternative sweeteners high in fructose fare? In response to agave being named a top five worst sweetener, Craig Gerbore, former president of Madhava and now serving on the Madhava Board of Directors, said, "People have attacked agave because of the fructose content. But they're not talking about real consuming quantities. People don't consume [agave] in the quantities that might result in health problems over time."

The problem with fructose, said Cantley, comes from its high level of sweetness, but lack of glucose. “This is ultimately frustrating to the brain (all foreplay, relatively little reward).”

After even just a few weeks of consuming a diet high in fructose our brains adjust and no longer associate sweetness with satiety. “This lack of satiety leads to greater consumption of all types of carbohydrates, especially sweets, ultimately leading to obesity and insulin resistance,” said Cantley.

4 alternative sweeteners to use in moderation

While Cantley's research might seem to signal the death knell of the sugar industry, it could spell opportunity for other parts of the food and beverage industry. The key, of course, is sweetening with moderation—even if you're formulating with one of these alternative sweeteners.

According to Big Tree Farms, a coconut palm sugar producer, coconut sugar also contains “significant nutrients, vitamins and over 14 important amino acids. These 'other' materials, and especially the amino acids, are thought to act as a buffer to the sucrose component of the coconut sugar, thereby slowing the speed by which the sugars are absorbed into the blood stream.”

So where simple sugars like sucrose and fructose produce blood sugar spikes and can contribute to insulin resistance, coconut sugar helps to maintain more stable blood sugar levels, reducing the after-snack insulin response. Plus coconut sugar is a whole food sweetener and contains potassium as well as iron.

According to data from Nielson, presented at Nutracon 2012 by Matthew Jacobs, marketing manager for Truvia with Cargill, nearly 50 million U.S. households (42 percent) currently buy products that use stevia-based sweeteners. That comes primarily from ready-to-drink beverages, but also from finished product sugar substitutes. Jacobs went on to show that the stevia category has seen overall growth of 40 percent by dollar volume from October 2010 to October 2011. Cargill’s Truvia—a stevia-erythritol blend—has been picked up in numerous finished products from yogurt to juice and jelly.

Tim Avila, president of Systems Bioscience, lauds the marriage of stevia with this zero-calorie sugar alcohol to create a more useable, better-tasting blend for food and beverage applications as well as tabletop use. Erythritol, he explained, provides an excellent bulking sweetener while stevia brings the high-intensity, natural sweetness into play.

At 250 times the sweetness of sugar, stevia only claims about half the intensity of sucralose (near 600 times sweeter than sugar), but provides consumers with a viable alternative to artificial sweeteners.

It was hard to walk an aisle at Natural Products Expo West 2012 without running into monk fruit. The "newest" natural sweetener to appear in products in North America is derived from a Chinese plant called luo han guo, or monk fruit.

The intensity of the sweetness in monk fruit extract is directly proportional to levels of a compound found in the fruit called mogroside V. It's 300 times sweeter than white sugar and has already been picked up in big-name finished products brands such as Kashi, Bear Naked and So Delicious Dairy Free.

Nutrient rich blackstrap molasses has been making a comeback with consumers—particularly natural product consumers—in recent years. Packed with vitamin B6 and iron as well as other essential minerals like potassium, magnesium, manganese and calcium.

“Of all the additional sugars we play with in our diet, blackstrap molasses is by far the healthiest,” said Mona Morstein, ND, chairwoman of nutrition at Southwest College of Naturopathic Medicine in Tempe, Ariz. “That is where all of the nutrients from the sugarcane and the sugar beets are.” Molasses also ranks lower on the glycemic index than table sugar and many other natural sweeteners.

But it's not just health-conscious consumer picking up the blackstrap. In September of 2011, Horizon Science achieved self-affirmed GRAS status for Benecarb, a molasses-based ingredient proven to lower the blood glucose response of a range of food products, including sugar, using an entirely natural ingredient.

See our editors' picks for 6 alternative sweeteners to stock