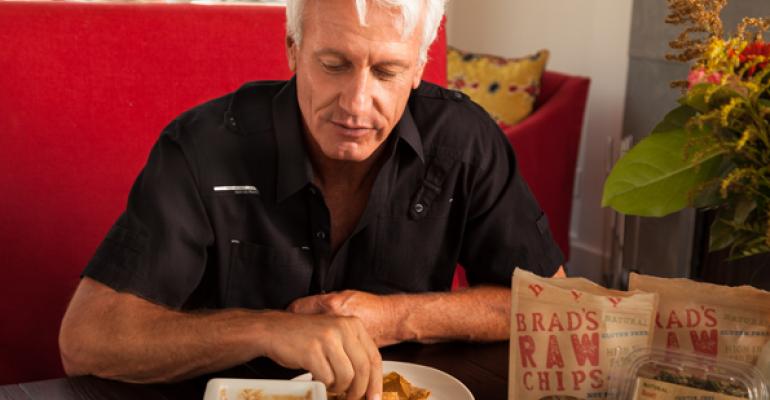 Founder Brad Gruno shares how his seven-day-a-week sampling strategy paid off, plus the details on his newest product line launch&mdash;for pets!

In less than three years, Brad’s Raw Foods became a $10 million-a-year company by staying true to the natural retail market. Now, having penned a major distribution deal with UNFI, founder Brad Gruno shares how his seven-day-a-week sampling strategy paid off, plus the details on his newest product line launch—for pets!

Brad Gruno: I went on a raw food diet to lose weight and feel better, and I started making the chips for myself. Then everybody who tasted them wanted more.

NFM: Who is your customer?

BG: My core [retail] customer is Whole Foods Market. My consumers are women ages 22 to 35, moms shopping for their kids or husbands.

NFM: How have you created an exciting brand from a food that used to be a throwaway garnish on dinner plates at restaurants?

BG: By making it taste good and educating people that kale is the most nutrient-dense leafy green sold in grocery stores. I credit the brand’s look to my sister. She’s an artist and hand-made the stamp look of the logo. A lot of the kale chips out there come in bags, and by the time you get them, they’re kale dust. I really wanted the clamshell-like container for protection and so you could see the product.

BG: I don’t think it’s that competitive. We are probably the most expensive brand out there, but we do a lot of things differently than our competitors. We de-stem every bit of our kale and use real vegetables (not vegetable powder) that we grind up and mix with the cashews. But the main reason we’re different is our dehydration system is totally custom built. It delivers a completely different taste than our competitors’ offerings.

NFM: How long did it take to bring Brad’s Raw Foods kale chips to market?

BG: We’ve been in business for three years. When I got started, I sold my chips at farmers’ markets. I was very successful at one market and then worked up to four. Then I took the product to a few stores such as the independent Kimberton Whole Foods [in Kimberton, Pa.]. So from the time I came up with the idea, six months later we were in our first store.

NFM: How did you get onto Kimberton’s shelves?

BG: By being local. I got to know the managers and the owner, Terry Brett, and asked him to try the chips. He said, “Oh my gosh, they’re so great!” He helps the people in his community, and he put my chips on his shelves right away. A couple of months later, I went to Whole Foods Market. It took me four or five months after sending my paperwork to get in there. In the first Whole Foods we got into, in Princeton, Pa., we were selling $14,000 in chips a month. That’s when it didn’t take rocket science to know the possibility of what we could do if we were in more stores. We became a $10 million company within two-and-a-half years.

BG: When you dehydrate a kale stem, it turns into a stick, and I really worried about someone choking on that—that’s a main reason why we de-stem the kale. But stems hold a lot of nutrients, so we used to compost and send them back to the kale farmers. Now, we use upwards of 20,000 pounds of kale a week, and because 35 percent of that weight is stem, we were literally hauling our profits away to local farmers. I thought, let’s keep profit in-house by creating a kale-based pet food. We grind up the stems and add vegetables for a raw, dehydrated dog treat.

NFM: Any challenges with bringing kale to the pet food market?

BG: No, just the opposite. This product is “people quality.” I mean, I can eat the dog food! It’s organic, non-GMO, gluten free, grain free and raw with living enzymes. There’s really nothing else like it.

BG: One was when UNFI came knocking on my door. It’s the largest natural distributor out there. I avoided it until now, but reps have been really persistent for the past four or five months. I had to build a plant big enough to handle the demand before I worked with such a large distributor. We just signed a deal. UNFI is going to take us to a $50 million-a-year company.

NFM: How do you work with natural retailers to provide consumer education and push your products?

BG: To me, sampling is the most important thing to build out a brand, especially if it’s so new like mine. If people don’t sample your product, they’re going to walk right by it on the shelf. Don’t be afraid to ask natural retailers if you can sample. You have to be persistent. It was just me when I started, sampling seven days a week in my first store. A lot of our sampling now happens on the weekends. We have more than 70 trained in-house samplers who know how to describe the product. We’ll probably have more than 100 soon. We put a lot of money into education, and I really think that has helped grow our brand. It also pays to offer promotions to get better shelf space. We do maybe three or four per year in which we offer 20 percent off and put the products on an endcap.

NFM: What has surprised you most about doing business in this industry?

BG: I have been in the corporate world my whole life, in telecommunications, and it’s just the neatest thing dealing with the people in this industry. They seem so much less stressed and so much nicer than what I was used to in the dog-eat-dog corporate world. I really enjoy that.

NFM: What has been key to weathering a fluctuating economy?

BG: I used to be employed in the telecommunications industry and I was part of the dot.com downturn. At one point I lost everything I had. When I started this business, I was on the bottom of the downturn economy. People thought I was crazy and said, “Brad, what are you doing coming out with a bag of chips for $7 in a downturn economy? You’ve got to be crazy.”

But there’s just that many people out there that I talked to who are desperate for something healthy—for an answer [to health woes]. And because I went through a raw food diet for a whole year, lost 30 pounds and felt 10 times better, I really do believe that health has to do with what we eat. The biggest thing that motivates me is having the passion for something I love to do. When I first started sampling, I’d work 14-hour days seven days a week. When you’re that passionate about something, it’s not work.

NFM: What’s one piece of advice you’ve received that’s been most helpful to your company?

BG: Some of my peers said don’t be afraid to hire people smarter than you or give part of your company away. You know that saying “A little of something is better than a lot of nothing?” If you have a hot brand and really want to grow fast, you shouldn’t mind giving equity to investors who can really add value to your company and take it to a whole other level.

NFM: How are you looking for investors?

NFM: Would you consider selling to a major conventional company?

BG: No. I do get a lot of people reaching out to me for help and that makes me feel good. Ideally, what I want to do in the future is a rollup because I see so many small companies that need help. Ninety-five percent of these companies don’t make it. Maybe we could even take the rollup public.

What all new natural entrepreneurs should know
Nov 27, 2012

Are you the right entrepreneur to bring your brand to market?
Feb 06, 2013