HomeProducts and TrendsFood and BeverageNatural foods retailers mobilize against GMOs
Recent
Latest
4 tips to get ahead of chemical concerns in packaging
May 20, 2022
7 CBD favorites in the increasingly popular gummies format
May 20, 2022
Mission MightyMe helps parents introduce allergens to babies
May 20, 2022
UNFI's Eric Dorne to step down as chief operating officer
May 20, 2022
Trending
Whole Foods' honors 30 companies with 10th annual Supplier Awards
May 18, 2022
Sponsored Content
The rise of sustainable business – eGuide
Sponsored Content
Getting ready for 2023: Trends for brands to consider
May 17, 2022
Sponsored Content
Debra Stark’s light shines bright on natural products industry
May 10, 2022
Natural Foods Merchandiser
brought to you by 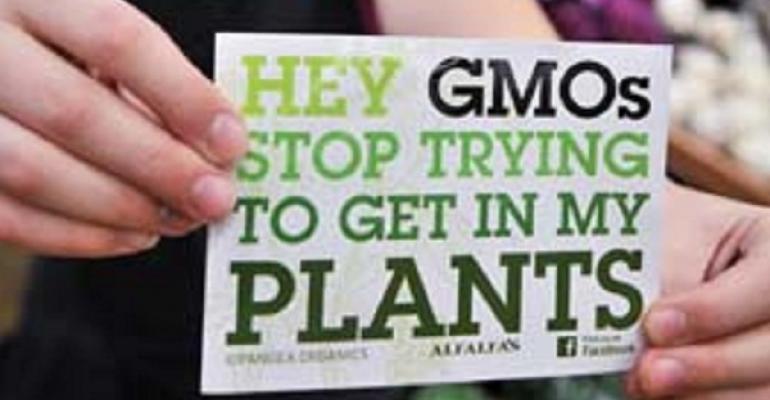 Consumers have about six seconds to make product decisions in grocery aisles with thousands of options...retailers have an obligation to help them address the issue of GMOs.

At the Natural Grocery Co. in Berkeley, Calif., green shelf tags highlight Non-GMO Project Verified products, while other items at risk of containing genetically modified organisms are flagged with a damning red sticker.

At Mile High Organics in Denver, two part-time staffers scrutinize products to assure they fulfill the company’s promise of being “Colorado’s only completely non-GMO retailer.”

“Consumers have about six seconds to make product decisions in grocery aisles with thousands of options,” says Michael Joseph, founder of Mile High Organics. “I believe retailers have an obligation to help them address the issue of GMOs.”

Seventeen years after genetically modified food hit the shelves, retailers from coast to coast are doing just that, joining an unprecedented—and many say long overdue—groundswell to slow the march of GM crops across America’s farmlands and tables.

Today, GM crops (particularly corn, soy, canola and cotton) make up half of all land harvested in the United States; GMOs are present in roughly 80 percent of processed foods. Just six years after the approval of GM sugar beets, genetically modified sugar makes up half of the nation’s sugar supply, according to biotech giant Monsanto. And with the pending approval of genetically engineered salmon, meat is poised to be the next so-called “Frankenfood.”

This swift proliferation, along with recent studies showing harmful environmental impacts of GMOs, has galvanized purveyors and consumers of natural products, spawning everything from theatrical protests to sophisticated lobbying efforts. Many fear we could someday lose our ability to choose genetically unadulterated products—if we haven’t already. (Retailers: 11 actions you can take to fight GMOs.)

“We have failed as an industry to build a powerful coalition around this issue, and now we are in real jeopardy,” says Gary Hirshberg, CEO of Stonyfield Farm, an organic dairy product manufacturer in Londonderry, N.H. Hirshberg estimates he spends 90 percent of his time speaking to stakeholders about GMOs. “Now is the time to act,” he says.

But just what that action should look like—and the role natural products retailers should play—is a matter of great, sometimes ferocious, debate.

One of the largest challenges facing the anti-GMO movement is that many people don’t know what those three letters mean.

“If you asked the average American, ‘Have you ever eaten a GM food in your life?’ he or she would probably say no,” says Jeffrey Smith, a long-time anti-GMO activist. A 2006 survey by the Pew Initiative on Food and Biotechnology found that just 45 percent of Americans were familiar with GMOs, and one-quarter suspected they had eaten them. But those numbers might look a lot different today.

According to Schaumburg, Ill.-based market research firm SPINS, sales of products verified GM free by the independent Non-GMO Project were up 10 percent between April 2010 and April 2011, and Smith says attendance at his lectures has skyrocketed in the past year. This, he believes, is “an early indicator of a tipping point.”

“There is more interest and controversy around [GMOS] today than at any time since their commercial introduction,” says Chuck Benbrook, chief scientist for The Organic Center, a Boulder, Colo.-based nonprofit dedicated to organic farming research and education.

Why should a frazzled mom making her way through the grocery aisles care about the genetic makeup of her corn puffs or soymilk? For one, GM crops are almost sure to have been drenched with more herbicides than conventional crops.

The most common GM seeds are herbicide tolerant, meaning they have been spliced with genes intended to help them survive weed-killing chemical sprays (specifically glyphosate, otherwise known as Monsanto’s Roundup). Bt crops are bred to contain Bacillus thuringiensis, a toxin that kills insects.

While Bt crops did, as promised, reduce insecticide use by 65 million pounds between 1996 and 2008, those improvements were dwarfed by a 383 million-pound increase in herbicide use, according to a 2009 report by Benbrook. In 2008 alone, GM crops were treated with 26 percent more pounds of pesticides per acre than their conventional counterparts. And that number is expanding exponentially, as weeds become resistant to glyphosate, prompting farmers to spray more or reach for new—potentially more toxic—weed killers, Benbrook says. A mounting body of evidence suggests this increased herbicide use may cause health risks.

One landmark study, published in May, found traces of Bt toxin in the blood of 93 percent of mothers and in the cord blood of 80 percent of their children. (Previously, biotech companies insisted that the toxins are destroyed during the digestive process.) “Given the potential toxicity of these environmental pollutants, and the fragility of the fetus, more studies are needed,” the researchers wrote.

Julian Little, MD, chair of the Agriculture Biotechnology Council, says the methods used for this particular study are unreliable. “Furthermore, this report does not identify any health or safety concerns related to consuming biotech foods,” Little said in a statement. “GM ingredients have been consumed around the world over the past 15 years without a single substantiated health issue.”

Solid, human studies on the health impacts of GM crops are virtually nonexistent—a fact that has lead many activist groups, including the Non-GMO Project, to refrain from using health risks as a platform for generating opposition. But Smith, who tours the country lecturing about the potential health problems associated with GM foods, says numerous animal studies suggest GMOs could cause allergies, digestive problems, impaired immune response, reproductive problems and organ damage.

Others agree. “GM foods have not been properly tested for human consumption and … there is ample evidence of probable harm,” the American Academy of Environmental Medicine said in a recent statement.

A move for better labeling

Genetic engineering causes other problems as well. Benbrook notes that GM seeds create economic harm for farmers, who pay three to six times more for lab-produced seeds than for conventional. Competition from companies such as Monsanto has also increased consolidation of the seed industry, which makes non-GM seeds harder to come by.

Meanwhile, due to seed contamination and pollen drift, even well-meaning organic farmers say they have a hard time guaranteeing that their crops are completely GMO free. This makes it particularly difficult for retailers to ensure that the products they carry do not contain GM ingredients.

“We are a natural foods store, and our customers are incensed that we are selling them genetically modified food. But unfortunately, it just is not that easy to get it out of the store,” says Bob Gerner, general manager of the Natural Grocery Co.

In 2003, after an angry customer accosted a stocker at his store, Gerner helped launch the People Want to Know Campaign, asking manufacturers to either rid their products of GM ingredients or tell customers which products might contain them.

The initiative has since blossomed into the Non-GMO Project, a nonprofit, standardized, third party–verified system for testing ingredients and products for the presence of GM material. More than 2,000 SKUs sport the Non-GMO Project Verified label, and 2,000 more are in the pipeline, says Megan Westgate, the project’s executive director. But not even that seal necessarily means a product is completely GMO free.

“GMO free is not a legally or scientifically defensible claim”—even though some manufacturers make that claim, Westgate says. “To say it is 100 percent free of something means you have to test all of it.”

Although the program has been widely praised across the industry, some have criticized its allowance of minute amounts (less than 0.9 percent) of GM material. Others say the high cost of testing can be a deterrent for small companies.

“If we have private certifiers coming out with their own labels and no legislation behind them, it just adds to consumer confusion,” says Joseph of Mile High Organics. “I’m not going to ask my suppliers to spend thousands of dollars to be certified by these guys. I’d rather spend the money to do that legwork myself.”

Stonyfield Farm’s Hirshberg is a vehement supporter of the Non-GMO Project, but he also believes that work must be done on Capitol Hill to convince lawmakers to mandate labeling, halt the introduction of new GM varieties, better contain those already out there and pay farmers when their crops are contaminated.

“A lot of the efforts out there are aimed at stopping GMOs altogether. That simpy is not realistic. We are going to be living with these things for the rest of our lives, whether we like it or not,” says Hirshberg, who was recently appointed to a trade and policy committee by President Barack Obama. “The critical thing now is to maintain a back door—to have non-GM seeds preserved and to assure that consumers can continue to have a choice.”

Not everyone agrees with Hirshberg’s approach. In a scathing blog post on the Organic Consumers Association website on Jan. 27, OCA National Director Ronnie Cummins named Stonyfield Farm, Organic Valley and Whole Foods Market among “a self-appointed cabal of organic elite” and accused the companies of “surrendering to Monsanto” by not fighting harder for an outright ban of GM alfalfa. (According to The Organic Center’s Benbrook, the greatest near-term threat posed by GM alfalfa is not the risk of GMO contamination of the organic milk supply, but rather the contamination that could occur in the alfalfa seed supply.)

“These companies have publicly admitted that they no longer oppose the mass commercialization of GM crops, and are prepared to sit down and cut a deal for coexistence with Monsanto,” Cummins wrote. His post went on to call the Non-GMO Project a “greenwashing effort” that fails to put pressure on retailers and manufacturers to clean up their act.

Although Cummins is also in favor of mandatory GMO labeling laws, his organization is taking a different approach, staging rallies outside Whole Foods Market, where protesters in white biohazard suits throw out “natural products” from manufacturers such as Tofutti, Kashi and Boca that are believed to contain genetically engineered ingredients. Their demand: Stop selling unlabeled GM foods now.

If only it were so easy, Gerner says. “I’d love to do that and I plan on doing it, but it will take years. We want to give manufacturers a chance to change their ways.”

In the meantime, Gerner and other retailers will continue to flag products with questionable ingredients, host lectures, support political efforts and attend industry meetings aimed at, essentially, trying to encourage everyone to get along.

Come October, regardless of their opinions on how the battle against GMOs should be waged, many of them will end up in the same place—on the East Coast, participating in the first ever Right2Know March in support of GM labeling.

“This is such a huge and important issue that we have to be coming at it from multiple angles, and I really believe there is a place for all of it,” says Non-GMO Project Director Westgate, who is helping organize the Oct. 2 to 16 protest march that will stretch from New York City to the White House. “This is going to be a great chance to bring everyone together.”