HomeProducts and TrendsFood and BeverageOMG, it's a GMO rap video!
Recent
Latest
Innovation at Milkadamia is a weekly exercise
May 27, 2022
Sponsored Content
Are there potential carcinogens swimming in your biobased laundry detergent? – article
Rowdy Mermaid disrupts functional beverages with science-based innovation
May 26, 2022
Monitor: Environmental claims confuse consumers—even natural shoppers
May 26, 2022
Trending
Getting ready for 2023: Trends for brands to consider
May 17, 2022
Natural beauty market trends
Jun 16, 2021
Podcast: What brands need to get on shelf at Fresh Thyme Market
May 24, 2022
The Planting Hope Company aims to prove gender equity leads to success
May 23, 2022 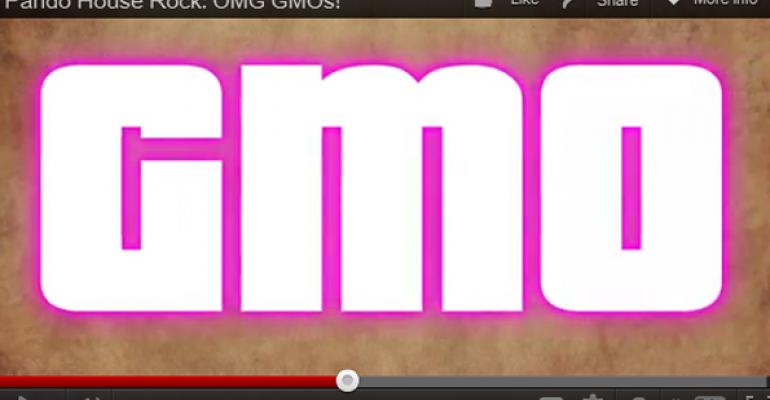 The newsical &quot;OMG GMOS!&quot; hits YouTube and the New York Times to educate a youthful demographic about genetically modified organisms.

A recent report told us that by the year 2020 millennials—the generation born between 1982 and 2001—will grow to encompass 19 percent of the population. With burgeoning awareness and interest in pursuing a holistic lifestyle, there’s massive opportunity for natural retailers and manufacturers to market to this young, hip, and tech-savvy demographic.

So what better way to educate millennials about pertinent food issues than through the medium of rap? Or more accurately, through the vehicle of a newsical—a video straddling the line between conventional news reporting and, you guessed it, a musical.

David Holmes, co-founder of Explainer Music, a company excelling in such melodious creations, recently released the video “OMG GMOS!” for the website PandoDaily, according to the New York Times Dot Earth Blog.

Almost as interesting as the video itself are the comments beneath the Times posting—they exhibit an incredible knowledge of GMOs already.

For instance, the song relates, “There are also ecological risks involved/You can make a new problem like the one you’ve just solved/Like corn that’s bred with a built-in pesticide/The pests evolved and now superbugs thrive.”

One commenter wrote, “Any single pest control tactic favors the evolution of resistance, but the balanced use of multiple tactics doesn't necessarily do so.”

Another responded, “If the lyrics are based on science, looks at the situation at large, gives both sides of the story and finally makes one think (along with busting a move as the kids say) the message is well done.”

Whether or not the newsical resonates strongly with the millennial generation, the important aspect of the video is that it not only raises awareness over GMOs, but it also promotes an educated discourse about the issue at hand. Given the passion demonstrated in the comments section, it’s clear that the science, social and health implications and politics behind GMOs remain murky, and more educational content—such as the video—is welcomed.

Keep the conversation going. Post your thoughts in the comments below.