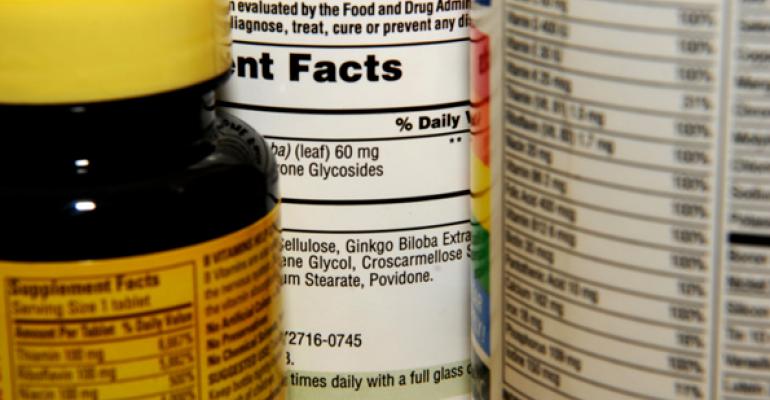 Could recommended changes to the Daily Values by the FDA make things more confusing for your customers?

If shoppers want to learn more about the nutrients in a food or dietary supplement, they generally turn the product over and scan the percentages of Daily Values listed on the Nutrition Facts or Supplement Facts panel. All too often, consumers are confused by the numbers they find—and if the Food and Drug Administration approves recommended changes to its DVs, the picture may soon become a whole lot muddier.

Daily Values have always been based on recommended dietary allowances—the average daily intake of a nutrient that is sufficient to cover the needs of nearly all (97.5 percent) healthy people. So when shoppers look at the label on a multivitamin or carton of milk and see that it contains 20 percent of the DV for a specific nutrient, they tend to relate it to their own personal needs, says Taylor Wallace, PhD, senior director of science and regulatory affairs at the Council for Responsible Nutrition.

Current RDAs are by no means perfect. They were set in 1968 and, in many cases, are based on outdated research. Since 1997, the Institute of Medicine has updated its dietary reference intake values, most recently for calcium and vitamin D, based on compelling new research. Unfortunately, however, you won’t find these updated recommendations reflected on labels. This means your supplement-aisle staffers probably find themselves reminding shoppers that the IOM now recommends daily intake of 600 IU of vitamin D for adults up to age 70—even though this information is not communicated via the Supplement Facts panel.

In 2004, the FDA asked the IOM to make recommendations for revised DVs on labels. But in an unexpected move that dismayed nutrition experts and industry groups such as CRN, the IOM advised ditching RDAs altogether, and instead basing DVs on Estimated Average Requirements—nutrient values that cover the needs of only half of the healthy population. The FDA is currently evaluating this recommendation and is scheduled to issue a formal decision next year.

Another issue is that current RDAs differ based on age and gender, so a postmenopausal woman, for instance, has a higher RDA for calcium than does a 20-year-old man. But by changing labels to reflect EAR-based DVs, “a postmenopausal woman would think she was getting 20 percent of her daily value in a glass of milk, when in fact she’s getting 20 percent of the average of the population,” Wallace explains. “She actually needs to get more than that 20 percent.”

What’s behind the IOM recommendation? Wallace points to some public concern that certain individuals could exceed the tolerable upper intake level (the amount below which no adverse events have been reported, also known as the UL) for some nutrients by following current DVs. For instance, when a mother reads a label and sees a 20 percent DV for calcium, she may not understand that it’s more like 30 percent for her young child. Or, over the course of a day, an individual might consume dairy products, calcium-fortified orange juice, a multivitamin and a calcium supplement and get closer than he realizes to the UL for calcium.

“This is why consumers need to have a solid knowledge of their personal diet habits, and work with their dietician or doctor when taking a lot of supplements and functional food products,” Wallace says. However, he points out that this is a problem for a tiny percentage of people—especially because, when setting ULs, the IOM uses an uncertainty level of two, meaning no adverse effects have been observed in individuals who have taken twice the UL amount.

“There’s a sense of protecting consumers, but to me there’s more of a risk in lowering the values because consumers may not obtain adequate amounts of vitamins and minerals,” Wallace says. Most Americans already fall short on some nutrients, including several B vitamins, vitamin D and calcium, he adds.

Wallace identified a laundry list of other ways the proposed change doesn’t seem to benefit consumers. For one thing, the FDA allows foods with 10 percent and 20 percent of a DV to be called a “good” and “excellent” source of that nutrient. With lower DVs, less-nutritious foods could make those claims. Using lower DVs on food and supplement labels would also create a disconnect from most public-nutrition policies, including the 2011 MyPlate dietary guidelines (which are based on RDAs).

If these changes are made, most consumers probably won’t even realize it, Wallace says. The FDA would just set a date by which manufacturers would have to change their labels. “I think this could lead to defortification of a lot of food products,” he says. For cost effectiveness, most food and supplement manufacturers would not put more than 100 percent of DVs into products, he adds.

So when—and how—will the FDA make its decision? Postponed from early this year, the process is set to begin in December. After issuing a call for proposed rule making, the FDA will open a 60- to 90-day period for public comment. Wallace encourages interested citizens, retailers, manufacturers and health practitioners to submit feedback. “The FDA does a good job at taking all the stakeholders’ comments into consideration,” he says. Trade associations, including CRN, will also be active in submitting comments and keeping the public informed.

Although DVs sorely need to be updated to reflect current science, they should still represent the goal of optimal nutrition for most Americans, says Wallace. “We haven’t seen any problems [with using the highest RDA] since 1968. If the system works, why change?”