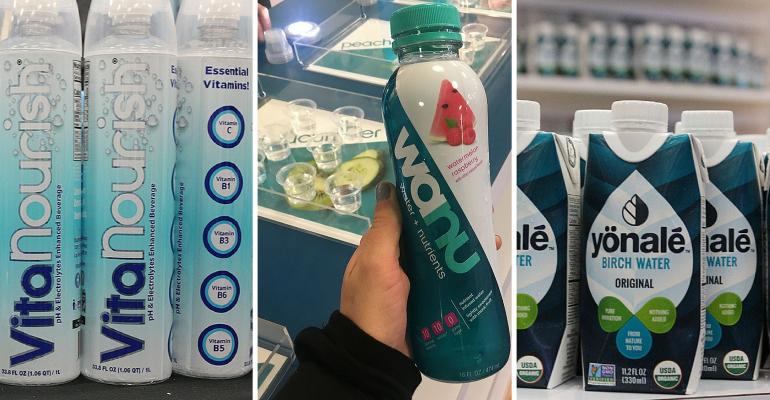 Bottled water sales continue to pop as consumers can soda. Natural Products Expo West showcased many ways water can kick the old-school can and boost health and hydration, too.

Water products flooded Natural Products Expo West this year and with good reason: Bottled water surpassed soda as the No. 1 drink sold in the United States in 2016.

The sugar backlash certainly has fed the trend, but purveyors say reports of lead contamination and other frightening news about what exists in municipal water supplies has people turning to a seemingly secure source.

Traditional brands Dasani and Aquafina accounted for about one-fourth of bottled sales in 2016. But that’s not what excited at expo.

Functional bottled water sales in the United States reached $2.19 billion in 2015 and were projected to hit $2.88 billion by 2020, according to Statista. Credit flavored waters for making it easier to sack soda. Add carbonation, and it’s a win-win. The sparkles of water have even spread to other beverages including tea and juice (and not just the old sparking apple juice champagne stand-in). For some, the source is the story. Natural alkalinity and minerals. Filtered by nature. Pure taste. Coconut water introduced Americans to alternatively sourced water. Now the seed’s cousins are getting all the attention.