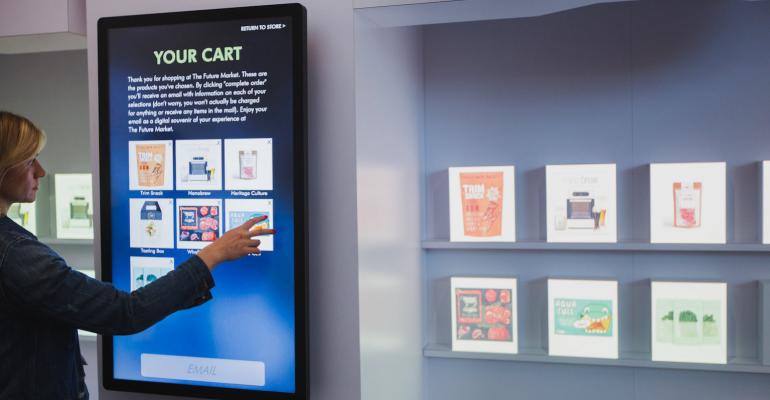 Tucked into a corner of the Winter Fancy Food Show was an exhibit called The Future Market, a pop-up mock grocery store designed to show attendees a forward-looking rendering of how buying food may evolve in the coming decades. The Future Market is the invention of Mike Lee, CEO and founder of the design firm Studio Industries, who was inspired to create The Future Market by the auto industry's practice of creating concept cars. “It’s an industry that’s institutionalized the idea of building glimpses of the future on a regular basis," reads The Future Market’s website. "Free from the constraints of full-scale production, concept cars are able to show a more ambitious version of the future than any of the current cars can."

For example, in 2017 Toyota showcased a self-driving concept car at the Consumer Electronics Show. It features an AI system named Yui that reads your emotions and can learn about your preferences over time. The car is nowhere close to being manufactured for retail, but it serves as scaffolding to build the future of the transportation industry using bleeding edge technologies.

The Future Market brainstorms ideas for food products that illuminate how food is a means to improve the food system. To a large extent, this mentality is already reflected in the natural products industry, with brands such as Dr. Bronner’s, Patagonia Provisions, Maple Hill Creamery and EPIC using ingredients in their products as tools to mitigate climate change and spark social movements by nourishing the soil. In EPIC’s recently published Impact Journal, for instance, the company says that in 2017 they converted 620 acres of Monsanto-sprayed farmland to grassland (the brand’s goal is to convert 1 million acres). That’s tangible change to get excited about.

Similarly, these six new concept products conceived by The Future Market are designed to inspire, motivate and provide a framework for thinking about how finished consumer goods can play a role in shaping our—and the earth’s—future. Find renderings, descriptions and my takeaway of each product below.

For an added bit of fun, I’ve ranked each product by its "cool factor," scored in none other than … number of cool cats. Because, cats. On a 1 to 10 scale, cool cats measure how likely it is for the concept product to succeed in the market, the challenges to making it happen and whether the product can inspire the next generation of food manufacturers. The Future Market’s description: “Block Bird’s is the first fully transparent supply chain line of chicken products verified by blockchain technology. All chicken is sourced from a multitude of small farms in the American Midwest, where the entire journey of the chicken, from egg to grocery store, is recorded and plainly visible on the front of the package. Block Bird’s uses state-of-the-art interactive e-ink packaging to show the entire chain of custody, all feed and inputs, as well as the health and handling history of the chicken you’re about to eat. With Block Bird’s, you can be absolutely sure that you’re getting the finest, most well-raised chickens on the planet. That’s the power of the blockchain to create the world’s most transparent chicken.”

My takeaway: Originally invented to track Bitcoin, blockchain is a public digital ledger of transactions managed by a network rather than a central authority. As transparency continues to be a concern for all food—not just in meat—blockchain technology could be a solution to tracking exactly where food originated, and where it traveled to get to your plate.

I love how this product concept includes hatchery, farm and processing information on the front of the package, which seems like it's on a smart screen rather than printed on paper with ink, making for a more interactive shopper interface.

The only thing missing: A third-party certifier that provides information about these three operations to make it easier for consumers to decide if it's an ethical supplier. Is the farm a part of the Global Animal Partnership? Is it Certified Humane? Layering this information over blockchain would provide more nuanced product transparency. The Future Market’s description: “Faux Fin, Shark Fin Soup is a premium, indulgent soup for Asian food lovers looking to celebrate a special occasion at home, or simply make an everyday meal just a little more special. Faux Fin is a modern take on a classic Chinese dish that has been long derided for its inhumane treatment of sharks. Our main ingredient, shark fin, has been cultured in a bioreactor with an algae-based nutrient medium. It’s then added to the soup to give it the signature texture and taste that has been enjoyed for ages at Chinese weddings, holidays and other special occasions. Using cellular agriculture, no sharks were harmed in the making of this soup. It’s a delicious, guilt-free way to indulge.”

My takeaway: The insidious killing of sharks just for their fins is a leading reason why sharks are on the endangered species list. According to the Smithsonian Museum of Natural History, some shark populations have decreased by 60-70 percent due to human shark fisheries. In addition to assuaging the pressure on shark populations to supply shark fins, the presence of "cell ag" shark fin soup may work toward ending consumption entirely. Curious things occur in the market when formerly rare, expensive items are adulterated by the presence of synthetic versions—the real product becomes untrustworthy, and total sales fall.

I first learned of this phenomenon from a company called Pembient that creates biofabricated rhino horns to end poaching. When Pembient announced its mission in 2015, news of the company's work went viral—and astonishingly, rhino poaching rates stalled for the first time in a decade. “By the end of 2016, a ‘savings’ of over a thousand rhinos had accumulated, some of which might be attributable to frightened speculators leaving the market ahead of an impending influx of questionable horn carvings,” Pembient reported.

The company cited 2014 research published in the journal Conservation and Society that found the strongest reason people chose not to eat shark fin soup wasn’t necessarily for ethical reasons. It was because fake shark fin was prolific across the restaurant industry. “The most-emphasized factor behind the decline in shark fin consumption in Beijing restaurants highlighted by managers and chefs was the preponderance of fake shark fins on the market,” the study authors wrote. “Selling synthetic shark fin is common in the restaurant market, with the result that consumers do not trust buying shark fin.”

Faux Fin could be such an identical shark fin swap that the market for shark fin soup could disappear entirely. My takeaway: I mean, sure. THC-infused flavored olive oil is a better way to catch a buzz than inhaling marijuana. And kudos for being organic. But I don’t see Micro Green providing notable environmental or social benefits. Although the idea of spritzing pizza with a white truffle-infused organic olive oil sounds pretty tasty, meh. Three cool cats. The Future Market’s description: “Kernza Krunch is a deliciously sustainable and fun way to start your mornings. Fill your bowl with crispy flakes made from Kernza, a long-rooted, perennial grain that helps preserve soil health by resisting drought and reducing erosion. Each bite is filled with a multi-colored rainbow of flakes, with a slight sweetness that comes from the natural molasses/honey-like flavor in Kernza—no added sweeteners needed. And every flake is color coded (with natural, plant-based food color) to denote where in the United States the grain came from: Pacific Northwest, Kansas or Minnesota.”

My takeaway: This is 10 cool cats! Kernza is a branded wheat strain developed by The Land Institute that has exciting potential to meaningfully capture carbon from the atmosphere and sequester it into the soil where it belongs. It’s a perennial grain, so farmers don’t have to replant every year or till their soil. Plus, Kernza’s root system can grow up to 10 feet in length—much longer than conventional wheat—which allows Kernza to require fewer water and fertilizer resources.

I also love the idea to tint grains different colors (with natural ingredients such as beet juice, turmeric and red cabbage) to symbolize grain regional identity. It’s a way to spark respect for local markets in a nationally distributed product. The Future Market’s description: “Fresh flour is better flour. The average industrial flour that you buy in stores has often been sitting around for months waiting for you. To get that kind of shelf life, you can’t really grind up the entire wheat kernel with all those delicate, nutritious fatty acids that can quickly go rancid. Cheap, store-bought flour pales in comparison to flour that you mill fresh at home, as you need it. With Mini Mill, you have access to a multitude of fresh, whole grains that you grind into flour at the push of a button, all in one compact kitchen appliance.”

My takeaway: I like this product! The design is reminiscent of a hipster-chic Polaroid camera, and I’d be delighted to house it on my kitchen counter. The Mini Mill would encourage consumers to incorporate more varied grains into their baking aside from conventional wheat, such as farro, millet, rye, sorghum, teff and more. As a bread baker, it would also make experimenting with grains easier. Why only five cool cats? The individually packaged pods of whole grains seems like unnecessary plastic packaging. The Future Market’s description: “Plant Plate is the heartiest, most convenient way to fill up after a long day. No appetite is any match for what Plant Plate has to offer. Packed with 30 grams of plant-based protein, Plant Plate never lets you down and always leaves you satisfied ... Meat in the center of the plate? That’s so 2010. Feast on a mega-sized roasted cauliflower steak surrounded by meaty chickpeas, corn and onions. The vegetable jus is enriched with bone marrow, spirulina and offal trimmings for an unctuous flavor explosion. Finish that all off with a spent grain berry cobbler for dessert and you’ll feel energized and ready to roll once you’re done.”

My takeaway: For this Hungry Man-style frozen product, The Future Market replaced the usual hefty slab of meat with a cauliflower steak, and used less-popular animal products such as bone marrow and offal to infuse the meal with flavor and added nutrition. It sure ain’t vegan. But this meal simultaneously promotes USDA Organic, convenient plant-based eating while also mitigating food waste. Very cool. Count ‘em—nine cool cats!