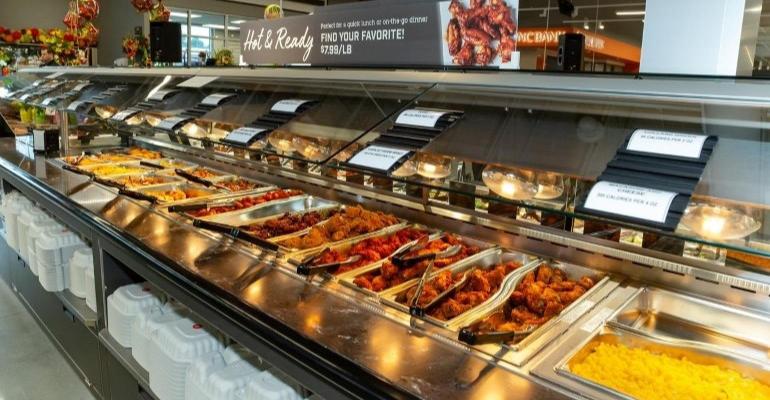 In 2018, grocery foodservice sales, including beverages, totaled $21.5 billion, up 8.2% year over year, according to FMI’s Power of Foodservice at Retail 2019 report, released this month. Citing Nielsen data for the 52 weeks ended in mid-June, the study said deli-prepared food sales grew 8.4% to $12.7 billion, outpacing the 7% gain for the deli department overall, which tallied sales of $36.9 billion. (Charts from FMI 2019 Power of Foodservice at Retail study.) 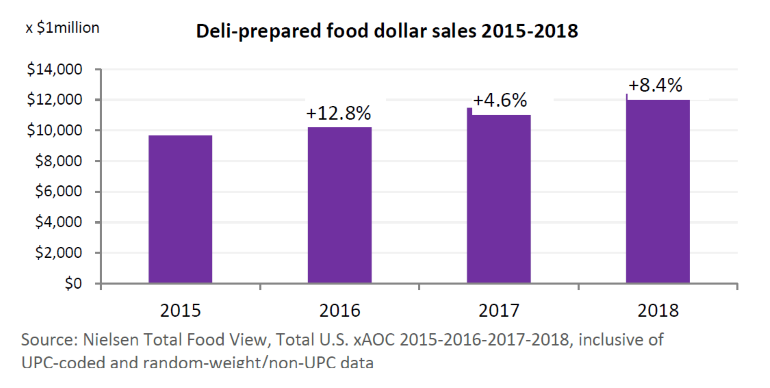 Related: How can retail foodservice compete with fast-casual restaurants?

Other prepared food segments in the deli that generated sales growth last year included fully cooked meat (5.1%); meal combos (12.3%); olives, capers and marinated vegetables (6.6%); and desserts (13.2%). Pizza was the only category experiencing a decline, down 4.6%.

“Convenience is one of the most powerful mega-trends in today’s grocery landscape, driving sales for items ranging from value-added meat and produce to packages designed for on-the-go consumption,” FMI reported. “Outsourcing meal preparation altogether is the consumers’ ultimate form of convenience, and more dollars and meal occasions have shifted to restaurants in recent years. Grocery stores can (re)capture food dollars through a strong foodservice offering of their own.”

Room for growth in deli-prepared foods 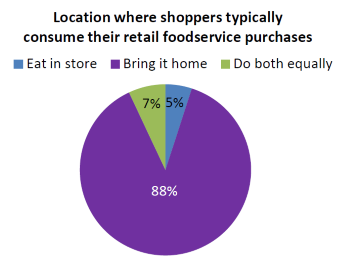 "An area of opportunity for grocery retailers is conversion, from the total store to the deli department and the deli to deli-prepared foods,” FMI said.

Consumers average 161 grocery trips annually compared with 28.3 trips to the deli department and 20 trips for retail foodservice. This means that just 17.6% of trips include a deli purchase and 70.7% of deli trips include a prepared foods purchase, the report pointed out. Average basket size rose from $7.54 to $7.92 for grocery foodservice, yet that gain stemmed from inflation rather than a bigger purchase.

“Despite the increase from 18.6 to 20.0 annual trips for deli-prepared in the past two years, there continues to be great opportunity to focus on improving purchase frequency,” FMI explained. “Improved conversion will have an impact, but relevant promotions, assortment and top-of-mind awareness will help drive improved trip frequency.”

FMI found that 63% of consumers take advantage of time-saving solutions for dinner, such as semi- and fully prepared items. Takeout accounts for most dinnertime foodservice purchases, with 88% of customers bringing the food home.

“Competitive differentiation strategies abound for our grocery members who place an emphasis on variety and reduce obstacles through fast and convenient shopping experiences,” Rick Stein, vice president of fresh foods at FMI, said in a statement. “These experiences may also be enabled by technology, as we’re witness to similar motivations in the restaurant industry.”

For example, 88% of shoppers want to see more new items and flavors in grocery foodservice. Among those consumers, 31% want to see flavor and item rotation monthly, while 28% recommend a weekly or a daily rotation.

Grab-and-go most popular with consumers 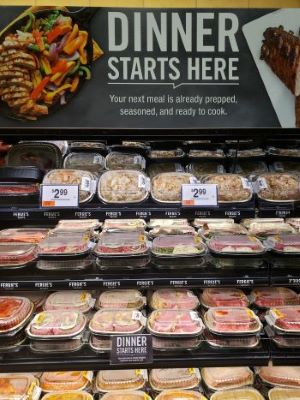 ns paramount as well, as evidenced by the grab-and-go, ready-to-eat format being the most popular prepared food option, with 68% of shoppers interested in these offerings. Grab-and-go, heat-and-eat foods are the second-most-popular style at 63%.

On the convenience front, grocers have more opportunity to drive prepared food sales via their mobile apps, according to FMI’s report. Fifty-seven percent of shoppers have downloaded grocery store apps, and 42% actively use one or more. However, just 38% use the apps to place foodservice orders, compared with 78% who use the apps to check weekly specials, 53% who do so to order groceries, 52% who get recipes and meal ideas, and 49% who research the foodservice menu.

“Grocery stores can favorably influence consumers with various speed-focused solutions, including a separate checkout line in the deli and the ability to order in advance,” FMI observed in the report.

FMI’s Stein noted, “Grocers with a positive reputation in retail foodservice can serve as strong motivation for 64% of shoppers who say they will actually go out of their way to find these stores.”