HomeProducts and TrendsFood and BeverageFast-casual concepts turn to jars for to-go convenience
Recent
Latest
Innovation at Milkadamia is a weekly exercise
May 27, 2022
Sponsored Content
Are there potential carcinogens swimming in your biobased laundry detergent? – article
Rowdy Mermaid disrupts functional beverages with science-based innovation
May 26, 2022
Monitor: Environmental claims confuse consumers—even natural shoppers
May 26, 2022
Trending
Getting ready for 2023: Trends for brands to consider
May 17, 2022
Natural beauty market trends
Jun 16, 2021
Podcast: What brands need to get on shelf at Fresh Thyme Market
May 24, 2022
The Planting Hope Company aims to prove gender equity leads to success
May 23, 2022 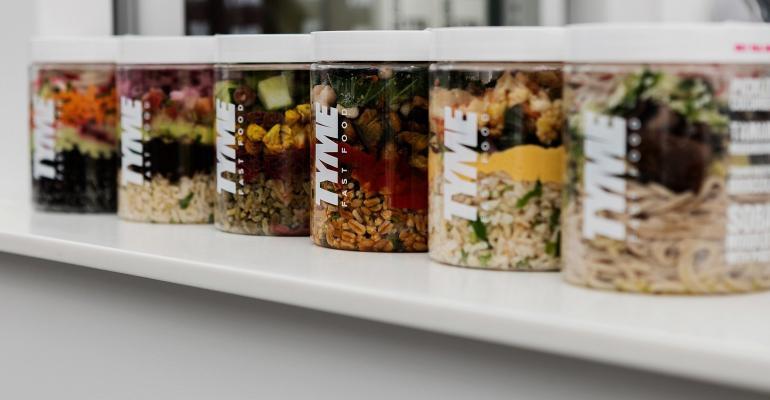 From salads to cake, jarred meals are green, photo-worthy and portable. Could they be good for your store?

Forget Styrofoam and paper cartons. A small but growing number of fast-casual restaurant concepts are popping up with an entire menu served out of re-usable screw-top jars.

For years, mason jars have been a vehicle for food and drink at full-service restaurants across the country. But the trend of to-go dishes in jars has become increasingly common throughout Europe and Asia, but has only recently reached the U.S.

Concepts like Ancolie and Tyme Fast Food in New York, as well as Jar Bar in Chicago, however, are pioneers of the trend here, designing concepts that appeal to contemporary diners on a number of levels.

Chloe Vichot, for example, launched Ancolie in November in Manhattan’s West Village. The 10-seat coffee shop and café offers a full menu of salads and bowl dishes served in glass jars, which show off the layering of ingredients. The concept does a brisk to-go and catering business.

A Rainbow Salad at Ancolie, for example, has red cabbage, turmeric cauliflower rice, carrots, lettuce, black sesame seeds and the option of an egg.  The signature Ancolie Jar has lentils, carrots, shallots, goat cheese, lettuce, and the option of both walnuts or chicken. As specials, warm soups and other dishes are available, as well as things like coconut chia pudding with sour cherry coulis for breakfast, and chocolate cake or apple compote for dessert or snacks. Prices for salads range from $12 to $14.

Vichot uses ingredients that are clean and made in house. “There’s no sugar or honey in the dressing, no genetically modified ingredients. We source from local markets to make sure it’s really fresh and in season,” she said.

Guests are invited to bring back their glass jars for a $1 discount, and about 25 percent of them do, Vichot said. Or they can recycle or re-use them at home.

Sustainability is important to Vichot, who moved to New York from her native France 12 years ago. She has long been troubled by the amount of trash produced by to-go food packaging, and vowed to find another way.

Though using glass jars rather than plastic raises her costs, the former Wall Street finance executive has built it into the business model, saying it has become a key point of differentiation. “It makes a big difference in the experience,” she said. “There’s the aesthetic aspect. It looks visually beautiful with the different layers, and people love to take pictures of their food. It doesn’t leak all over your desk.

“It’s healthy, and it’s a good portion at 22 ounces,” she added. “It’s good for the environment. We’re hitting on a lot of trends.”

Also in New York, the to-go concept Tyme Fast Food officially launched on July 24 with a kiosk of sorts — the company calls them “Tyme capsules” — near Times Square.

The pre-fabricated Tyme capsules are 8x10-square feet and on wheels, so they can be moved easily. The jarred meals are made nightly in a catering kitchen and delivered to sites in the morning, said co-founder Phil Winser, who also developed the restaurants Fat Radish, Rushmeyer’s, The Leadbelly and The East Pole in New York, as well as and a catering and marketing business called Silkstone.

The first test location for Tyme opened earlier this summer in the Gansevoort Market food hall, and the brand’s meals-in-jars are also sold in other outlets, like Equinox fitness centers and We Work co-working sites. Tyme also delivers through UberEats, ChowNow and Seamless, he said.

Winser’s partner in the brand is Felipe Hallot, a former finance executive for Burger King Corp. who was with private-equity firm 3G Capital when it acquired the burger chain in 2010.

On the menu at Tyme are healthful options like the Indian, a jar filled with layers of brown-rice-lentil pilaf, coconut-cumin beets, turmeric-roasted cauliflower and kachumber salad. The Original jar has black rice, green tahini, honey-mustard beets, carrot and chickpea salad and a radish-and-cucumber mix. All jars are $10.

The all-day concept will soon add breakfast options to the menu, said Winser.

The goal was to bridge the gap between the rapidly increasing pace of life and consumers who are looking to eat better, said Winser.

The jars are plastic, with screw tops, but re-usable. Guests that return jars get a $1 discount off the next order.

The goal is to grow the number of Tyme capsules throughout New York, as well as delivery.

“We plan to pop up in really unique locations where food isn’t normally available,” he said.

In the Chicago suburb of Northbrook, Karen and Adam Firsel launched Jar Bar in May.

Not everything on the menu is served in jars, but some dishes are to offer portability to the concept’s target audience: busy once-urban families that have moved to the suburbs and are looking for more healthful and delicious options beyond the traditional pizza, sandwiches and burgers of the fast-casual world, said Karen Firsel.

At breakfast, for example, a $6 Egg Bar jar might include a poached egg, sundried tomato pesto, avocado, garlic spinach and potato mash. Add bacon for $2 extra.

Oatmeal is layered in jars with toppings like strawberry compote, bananas and coconut sugar crunch; or dark chocolate chips, peanut swirl and granola.

Vividly colored cakes in jars position the brand for catering and event business.

But the menu also includes sandwiches and bento boxes for kids, which are served in more traditional packaging.

Jar Bar’s jars are plastic, though BPA-free and recyclable. Karen Firsel said the restaurant does not take back used jars but instead encourages guests to hand-wash and re-use the jars at home. The restaurant uses social media to suggest ideas like using the jars for plants, or in kid’s lunch boxes.

But the concept, which the Firsel’s built to be scaled, is “about much more than the jar,” said Karen Firsel, a former television producer for “Oprah.”

“I wanted to create a place for people to hang out and to give them permission to feel cool again. We’re city people who have moved to the suburbs, but our palates and tastes haven’t changed,” she said. “I want my dressings to be homemade and vegan and gluten-free. And I want a poached egg over roasted vegetables and mashed potatoes in the morning, I don’t want to go to Starbucks and have a sandwich that was thrown in the microwave.”

Chicago is also home to Farmer’s Fridge, a string of salad vending machines that serve up organic and local ingredients layered in BPA-free plastic jars.