GMO 2.0: The rise of never-before-seen genetically modified organisms with CRISPR 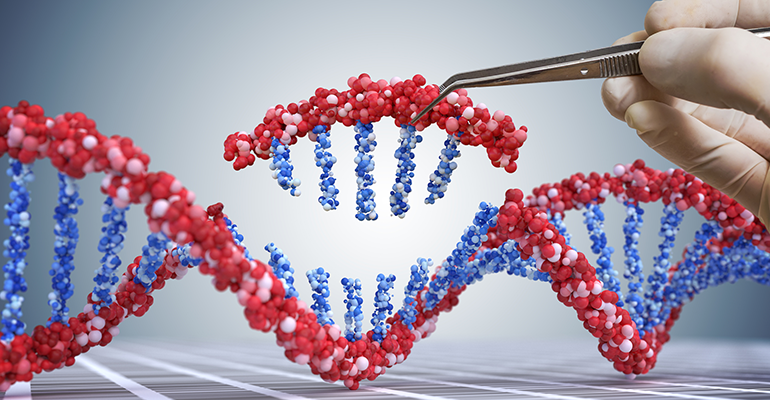 As novel gene-editing technologies like CRISPR and ODM take off, concerns about genetically modified foods, flavors, enzymes and fragrances entering the marketplace unnoticed are gaining traction.

GMO 2.0 is here. Even though more consumers are asking for non-GMO verified foods, businesses need to be aware of changes coming from within the supply chain as gene-editing technologies like CRISPR and TALENs rapidly change the food industry, especially in the United States.

“Agribusiness has a vision of how they want food production to go and that involves large-scale use of these new genomic technologies like CRISPR and synthetic biology,” says Jim Thomas, co-executive director and researcher with the ETC Group, which monitors the impact of emerging technologies and corporate strategies on biodiversity, agriculture and human rights. “It involves digital technology, using drones and robots in agriculture and large amounts of data flowing in and off the farm. This is the next stage of industrialization in the food chain. CRISPR is very much part of that vision.”

Genetic engineering has been around since the 1970s; the old-fashioned kind is cutting bits of DNA out of an organism and moving it over using a cut-and-paste technique. Gene editing (like CRISPR) is one of a number of different gene engineering techniques that allows DNA to be cut and extra things added in a different way, Thomas says.

Dr. Vandana Shiva, the founder and director of the Research Foundation for Science, Technology and Natural Resource Policy, echoes those concerns. The food industry is trying to draw a “false distinction,” Shiva says, between old-style genetic modifications “where you're inserting foreign genes” from other species for transgenic crops versus newer gene editing, “where you supposedly are just tweaking genes that are already there.” But it’s still genetic modifications, she says.

In the European Union there is a more stringent health and environmental review, which includes more tracking and labeling requirements for anything that’s genetically modified during all stages of the supply chain. In 2018, the USDA under Sonny Perdue’s guidance said it would not regulate crops that have been developed through traditional breeding techniques. European gene-edited crops are regulated as GMOs.

Next industrialization of the food chain

As a Scientific American story pointed out, “The CRISPR revolution may be having its most profound—and least publicized—effect in agriculture.” The reason: USDA doesn’t think all gene-edited crops—including the newer CRISPR variety—require the same regulatory attention. That means many companies are racing to get gene-edited crops into the food supply chain.

It’s a loophole experts say is being exploited because the USDA is enabling scientists to knock out gene traits and add more desirable traits, which the government considers more “natural” than inserting DNA from other species like is done in more “traditional” gene-editing techniques.

For example, gene editing now stops apples and mushrooms from browning, keeps oranges from greening and removes gluten from wheat, according to Synthego, a genome-editing company headquartered in Redwood City, California.

“The devil is in the details,” says Dr. Jonathan Latham, co-founder and executive director of the Bioscience Resource Project. That includes off-target effects, unintended side effects that can happen, Latham says, because gene editing isn’t as precise as many are lead to believe.

Regardless, Megan Westgate, executive director of The Non-GMO Project, says all gene editing approaches are “types of in-vitro nucleic acid techniques” and forms of genetic engineering that create GMOs. “These techniques are being sold into the supply chain as non-GMO, and that is really misleading,” says Westgate, who launched The Non-GMO Project in 2006.

Traditional GMOs are “transgenic,” meaning the movement of genes—DNA from one species to another—which makes it easily detectable. Via the EPA’s Plant Pest Act, developers of traditional GMOs had to go through a regulatory approval process to show their products weren’t plant pests. As a result, the application for regulatory approval allowed information to be entered into the public domain making it more visible, Westgate says.

Unlike genetic modifications, the new GMOs done by gene editing don’t require transgenics because they remove genes or copy DNA sequences from similar species. “These new GMOs are largely going under the radar,” Westgate says. “There is so much in development and it’s starting to hit the market.”

Thanks to lots of lobbying and funding by Monsanto, an American company that was purchased by Bayer in June 2018, Westgate alleges there’s been a tremendous amount of influence over government oversight as well as university funding and research.

Recently, there’s been a big shift in the conventional GMO space, Westgate says, and with more funding available many small startups are getting involved in genetic engineering. “The number of companies involved in biotech that we’re actively monitoring has increased by 250% in the last four years,” Westgate says. “We are currently monitoring close to 400 different companies.”

The Non-GMO Project, which uses affidavits for companies to self-report their GMO usage, says they are now using it for other techniques like RNA interference and oligonucleotide-directed mutagenesis (ODM) that is used for gene editing. Traditional GMOs that contain transgenic genes are easy to test, Westgate says. The newer GMOs aren’t, which is why The Non-GMO Project relies on affidavits.

In September, a consortium led by Dr. John Fagan at the Health Research Institute in Iowa released the first open source detection test for a gene-edited, genetically modified crop that is being used to detect SU Canola that was engineered by American gene-editing company Cibus, according Feed Navigator.

Dr. Jonathan Latham, co-founder and executive director of the Bioscience Resource Project, suggests natural food companies talk to their suppliers. If an ingredient changes, ask for a description of what they’ve changed in genetic terms.

Then ask the suppliers for tests they’ve using to check for modifications and to supply the testing reagents they’ve used, Latham says. “That ought to be reasonably easy for them to do,” he says, even if a company is reluctant to supply the information.

While fermentation is good when talking about pickles or kombucha, natural food businesses need to review fermentation processes to make sure they aren’t being genetically altered. “If you have a flavor that’s produced through fermentation, it may be biotech fermentation,” Thomas says. “It may be a vat full of genetically engineered yeast.”

Watch modified flavors, fragrances, enzymes and other minor inputs into products that can be easy to miss and “sneak into" the supply chain, Westgate says.

Be aware of phrases like “microbial derived” that can be in small flavors for fragrances and oils, Thomas says. “A lot are in supplements or cosmetics,” Thomas says. “They often come from the very large flavor and fragrance houses that are very invested in using synthetic biology.”

When possible, incorporate whole foods into a product that has been verified by The Non-GMO Project. There's less of a chance you’re dealing with genetic engineering, Thomas says. “The issue is usually very tiny ingredients in processed foods,” Thomas says.

Flavors like vanilla—sold as vanillin—are one of the biggest culprits, Thomas says. So are stevia and algae oil, which are more likely to come from genetic engineering but still be labeled as “natural.” Others on his list include valencene, an orange flavor and nootkatone, a grapefruit flavor largely being produced through synthetic biology.

Foods are being modified to disguise bruising

For example, driven by the french fry manufacturers, GMO potatoes—created by J.R. Simplot—hide symptoms of bruising using a genetic engineering technique called RNA interference (RNAi) that silences gene expression. “So even if it gets bruised or has a disease or growth in it, it doesn’t turn brown,” Westgate says. “It’s turned off the mechanism to say 'it’s not good.'"

Look for more changes in specialty crops, like saffron, Latham says, that could have a profound impact on local farmers. “There’s the potential to grow that kind of product in the lab,” Latham says. “Then you put all the saffron growers out of business and make it in your facility.”

The Non-GMO Project offers a list of verified products and retailers on its website. Thomas also recommends reviewing the GMO 2.0 Ingredient Database on SynbioWatch.org.

Look at Friends of the Earth, a nonprofit that tracks policies and projects on food and agriculture and Iowa-based Institute for Responsible Technology’s Protect Nature Now campaign, which includes videos about GMO microbes.

“If you see one of these at-risk ingredients, write your suppliers,” Thomas says. “Ask them to give you an affidavit that they aren’t using ingredients produced through synthetic biology or gene editing through these GMO 2.0 approaches. That’s really the safest way."