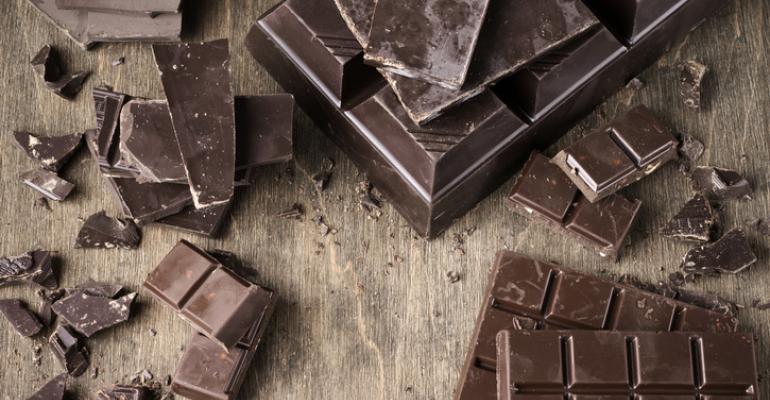 The global organic chocolate market is on the rise, and better-for-you inclusions and fun flavors are driving growth for some brands.

The report notes the growing popularity of artisanal organic chocolate and says a key market driver is growing demand for organic and better-for-you products—and that can include organic chocolate, which in raw or dark form is considered a superfood. Cocoa contains some B vitamins as well as copper, manganese, zinc and other minerals.

Related: The art of chocolate: Woo customers with craft, story and health

That’s exactly in line with what NibMor has seen, according to CEO Ralph Chauvin. He said, “As the new American consumer gets more and more educated about what they’re putting into their body, they want to continue of course to indulge, but they want to do that mindfully.”

He said NibMor’s most direct competitors are conventional brands like Lindt and Ghirardelli, as they’re most similar in product style and price point, but NibMor has more of the certifications that indicate a healthier, sustainably produced product. It’s those consumers, who likely shop in the mainstream channel and are looking to clean up their current diet, that NibMor is vying for most. “You’ve already been buying Ghirardelli and Lindt—you’re just buying a better-for-you bar.”

While NibMor makes bars with a higher percentage of cocoa—SKUs that compete more with brands like Green & Black’s—he said the lower cocoa percentage offerings, which compete more with Lindt, are driving the most growth for the company. Ingredient inclusions like superfruits, such as tart cherry or wild blueberry, are another driver.

He said he could see a change in growth patterns, though, as the trend toward health continues. “I believe as the consumer gets more and more educated, the percentage cocoa will go up. And the additions, the better-for-you inclusions to those chocolates is certainly something the consumer is looking for.”

What Chauvin doesn’t see is shifting to include functional ingredients, such as protein. “I don’t see that, because then you steer away from the indulgence. You have to add ingredients that are more congruent with indulgence,” he said. “I think the combination of better-for-you ingredients, like peanut butter, pretzels, and superfruits are where we’ll see continued growth, and items with less sugar.”

Chauvin also noted that for NibMor, the mainstream channel presents the greatest opportunity—because that’s where they’re able to capture people who haven’t already been eating an organic or artisanal brand, or who have been trying to stay away from sweets altogether because of the lack of options to feel good about.