How plant-based brands can change the protein landscape 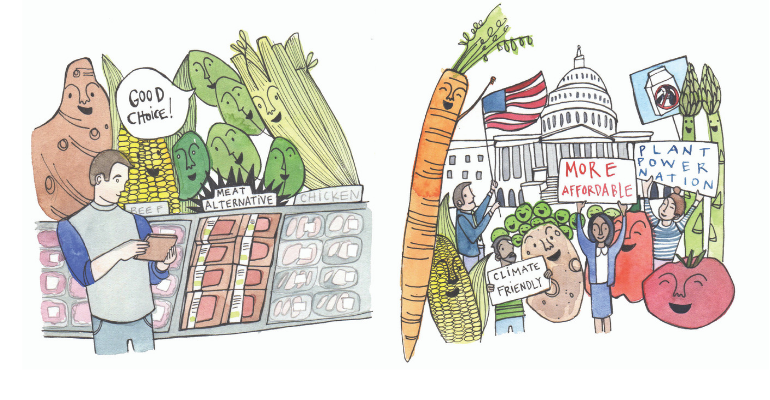 Petitioning the FDA and USDA to adopt a new definition of protein quality is a key step to shifting consumer perceptions of the popular nutrient.

If I were to tell you that my diet is mostly made up of vegetables, whole grains and high-quality protein, what picture comes to mind? Most likely you see the typical image of what many consider a well-balanced, wholesome dinner plate, perhaps with a glass of milk on the side. The vegetables and whole grains from obvious sources, the high-quality protein from a chicken breast, salmon or lean cut of red meat, right? For most people—many health professionals included—the qualifier for quality protein is that the source of it is an animal.

This thinking is based on a century-old definition of protein quality that takes efficiency of amino acid digestibility and distribution into account, but not much else. What’s missing here are important factors that adjust for the reality of modern living, where protein-based malnutrition is all but eradicated in the United States and our main animal sources of food contribute to factors that are counterintuitive to human and planetary health. By giving certain protein sources a label of “quality” that is based on and supported by the current definition, we’re also conveying that it’s “better.” That is both confusing and inaccurate, says Dr. David L. Katz, MD, MPH, founding director of Yale University’s Yale-Griffin Prevention Research Center and founder-president of the True Health Initiative (THI).

“The language we’re using about protein is leading people in the wrong direction and away from their personal health. The reality is that people are getting more than enough protein and the excess is not doing them any good,” says Dr. Katz. “And what’s being used to describe the quality of protein is at odds with everything we know about the quality of foods and diet. So foods that are best for people in the United States now would be more whole fruits, whole vegetables, whole grains, beans, lentils, nuts and seeds. But the idea that the highest quality protein sources are meat, eggs and dairy is actually discouraging people from shifting in a more plant-based direction and encouraging people to eat more animal foods.”

The seeds (and nuts) of revolution

If Impossible Foods' recent $300 million fundraising gain—the largest fundraising round for a plant-based meat company in history—isn’t enough evidence that consumers want a new protein landscape, then recent food and health survey data from the International Food Information Council Foundation helps drive the point. When asked “How would you rate the healthfulness of each of the following?”, survey respondents ranked ‘protein from plant sources’ as the third healthiest selection behind fiber and whole grains. Comparatively, ‘animal protein’ ranked 10th on the list of 12 options, just before fortified foods and sodium.

Consumer demand for plant-based protein options is grounded in their perception that those choices are healthier for them and the environment, according to another consumer study published by DuPont Nutrition & Health in late 2018 on the eating habits of more than 1,000 U.S. consumers. Those health benefits are more than perception, however. “Eat mostly foods of plant origin,” has been a recommendation from the World Cancer Research Fund and American Institute for Cancer Research for more than 10 years now. A systematic review of the literature on dietary patterns consistently points to diets that include high consumption of fruit, vegetables, whole grains and legumes and lower consumption of red and processed meat with lower outcomes of death from heart disease, cancer or any cause. Additionally, plant-based diets are a consistent characteristic of the Blue Zones, regions where there are unexpectedly high proportions of people living healthy, active lives to and past the age of 100.

So an overwhelming amount of nutrition science backs the benefits of plant-based eating, and so does the number of shoppers who are seeking more plant-based options. But are the plant-based meat and dairy alternatives they’re being offered satisfying enough to convert behaviors for the long term? In that same DuPont study, taste was cited as the top response as a barrier to people consuming more plant-based foods. But where there’s demand, there’s innovation. Long gone are the days of bland tofu scrambles and dense bean burgers. Today’s plant-based consumer expects intense flavor, satisfying crunch and umami-like tastes. And they’re getting it in the form of satiating and delicious-tasting vegetable-grain patties, really good fermented non-cheeses, milk substitutes made from every seed and nut, creamy dressings and dips sans mayo and dairy, veggie- or fruit-based jerky that’s both chewy and substantial, alternative burgers and brats that look (and cook) like the real thing, and so much more.

Another barrier that’s crumbling fast? Consumers don’t have to look far to get their hands on great plant-based foods. While you may find the most impressive range of plant-based offerings at natural stores and specialty markets, these retailers are not the only option. Shoppers can buy plant-based selections everywhere, including convenience stores and fast-food restaurants. Carl’s Jr., White Castle, Burger King and KFC already are—or soon will be—offering plant-based versions of their menu favorites. In terms of the life cycle of a food trend, reaching consumers at the c-store and fast-food level is THE last lap. It signifies arrival, an expected norm.

So what is standing in the way of a revolutionary plant-based finish line? One where that dormant memory buried deep within our DNA that tells us eating meat means survival is actually replaced with an epiphany that, eureka, its actually eating plants that equates a continued existence? Aligning the definition of protein quality with protein choices that are better for you and the planet is key to that realization, says Katz.

Geagan, one of the paper’s co-authors, explains the process of adopting a new definition and new consumer understanding of what signifies quality protein in four steps. “Step one is the methodology, meaning, how is the USDA coming up with the regulatory framework?” says Geagan. “Step two is the regulatory framework. Step three is what the food label looks like as a result of the framework—what is the percent daily value allowing a product to carry a nutrient content claim? And step four is the consumer picking up a product with a protein claim and making a decision. Our paper focuses on steps one and two. We contend that current step one—the current methodology around the definition of protein quality—is outdated.”

The current methodology used to rank protein quality results in a numerical score called the Protein Digestibility Corrected Amino Acid Score (PDCAAS). “In foods the PDCAAS varies and we look at the distribution of amino acids and the concentration of amino acids, but that’s it. We don’t ask, ‘Is this food good for people?’ or ‘What if you eat more of this food? Are you likely to be healthier or sicker? We don’t ask that.”

Though many of today’s eaters on the vegan to flexitarian spectrum would roll their eyes when family and friends express concern that a plant-based diet doesn’t provide enough protein, the opinion that better protein comes from animal sources widely permeates. “The current label and current methodology of defining protein quality is confusing consumers because they’re equating protein quality with foods that provide all essential amino acids. And that’s just old science,” says Geagan. “We now know that you don’t have to have all essential amino acids at the same meal, and we know that plant-based diets are actually associated with some of the healthiest outcomes. So in the marketplace, what the current metric does is create an advantage for animal products and puts plant protein almost at a disadvantage.”

What plant-based brands can do

Plant-based brands, supporters and sideliners of the plant-based movement should know that the definition of protein quality is important. At the end of the day, protein claims are dependent on the formal definition of protein quality. When nutrient claims play a role in consumers making choices that they believe are better for their own health, while those choices could actually be worse for them and the planet, there is a correctable solution.

The THI is gathering signatures on a petition that they will present to leadership at the FDA and USDA asking for the adoption of a new definition of protein quality. This kind of thing has been done before, most recently when the FDA adopted a new definition of the “healthy” claim in food labeling.

“At the very moment, it couldn’t possibly be more clear that for the sake of human and planetary health we need to eat more plants and fewer animals,” says Dr. Katz. “One of the major impediments is the very popular notion that only animal foods provide high-quality protein, that we’re not getting enough protein, and that the more protein we eat, the better. The language we’re using about protein is basically leading people in exactly the wrong direction.”