Nutrient-dense snacks take a bite out of boring 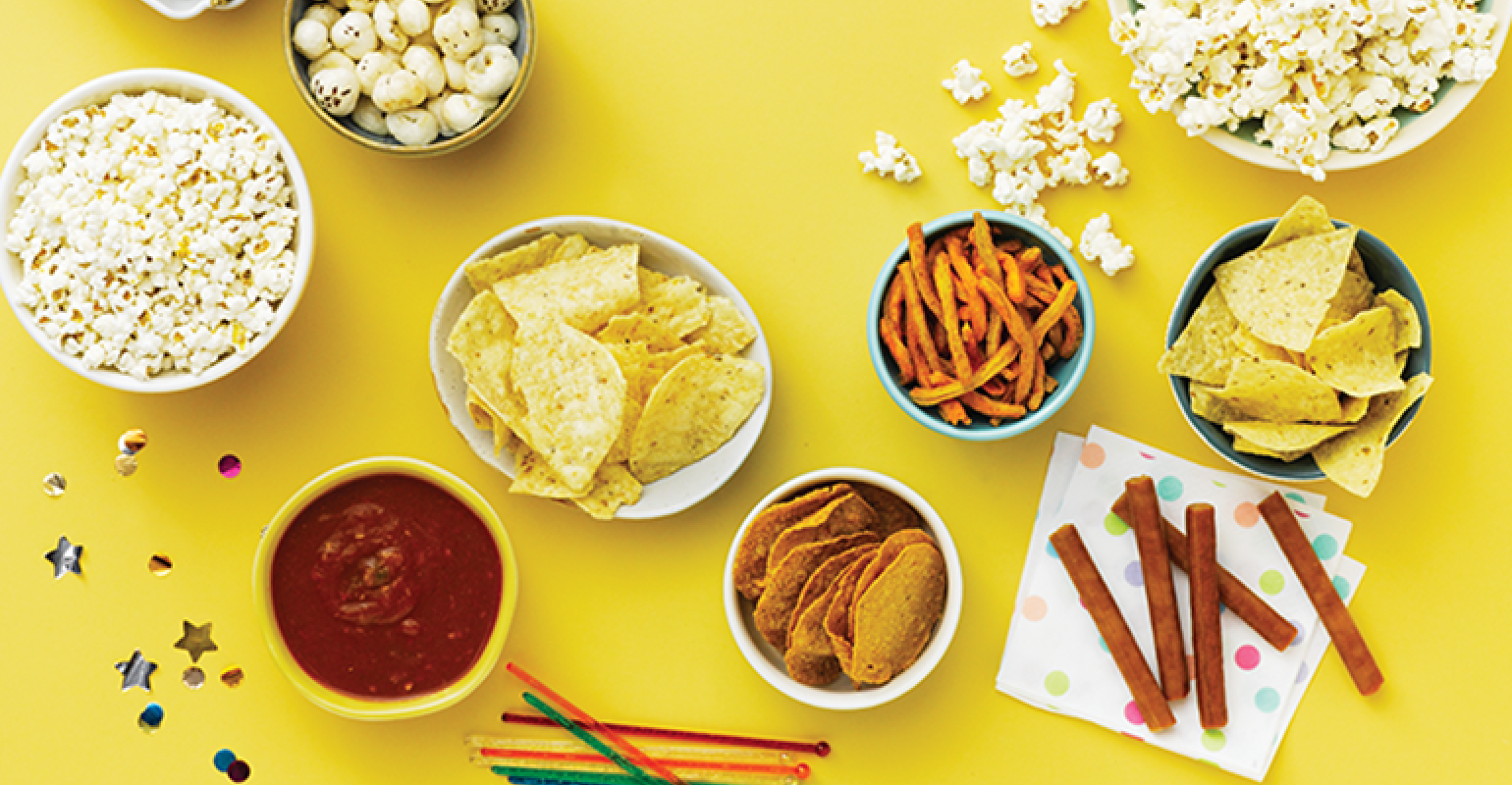 Legend has it that the potato chip was born in the summer of 1853. George Crum was working as a chef at the ritzy vacation spot Moon’s Lake House in Saratoga Springs, New York. When famously fussy diner Cornelius Vanderbilt, the wealthy railroad businessman, complained that his French fries were too thick, Crum sliced the potatoes as thin as possible and fried them into delicate crisps to teach his picky patron a lesson. Unexpectedly, Vanderbilt loved the newfound nosh. The potato chip became Moon’s Lake House’s signature dish. Crum eventually opened his own restaurant and potato chips were spread throughout the land.

Warning: This story is likely riddled with falsehoods. No one actually knows for sure where the potato chip was invented. But the mere existence of the legend indicates that starting in the 20th century, chips became an important part of life. Folklore materializes around the things we value. And Americans love their snacks.

Snacking is a massive category across all channels, growing 1.4 percent to $33 billion in January 2018 (a $470 million sales spike), according to SPINS. At $532 million as of Jan. 3, 2018, shelf-stable chips, pretzels and snacks occupied the lion’s share of snack sales in the natural and specialty channels, with puffed snacks in particular accelerating at 9.9 percent the 52 weeks ending Jan. 3, 2018. While jerky and meat snacks represent a smaller piece of the snacking pie, this subsection grew 11.3 percent in the same time period to $48 million in the natural and specialty food channels, making it a relatively small but extraordinarily fast-growing set.

Experts believe the snacking category continues to climb as consumers incorporate more snacking occasions into their days. According to a 2017 report from Millennial Marketing, younger consumers aged roughly 20 to 35 are more likely than any other generation to snack four times per day. And in some cases, snacking events are replacing meals entirely. “People are eating fewer big meals together and eating more by themselves,” says Scott Jensen, CEO of Rhythm Superfoods. “They’re having twice as many meal experiences, but they’re small meals.”

Millennials could be the demographic that embraces snacking the most. But don’t turn your snacking aisle hipster-ironic just yet. A recent Mintel study reported that a whopping 94 percent of Americans snack daily to mitigate cravings, reduce stress, satisfy hunger until the next meal and stay focused throughout the day. Cultural breakdown of the traditional meal across demographics leads smart natural food manufacturers to prioritize innovation, healthier formulations and individualized packaging solutions to better serve insatiable snackers. Retailers can capitalize on serial snackers by placing individually packed items (such as smaller bags of chips or low-calorie meat snacks) near the grab-and-go section of the store to nudge customers into buying a savory or sweet treat to save until after lunch. Another sales-boosting tactic: merchandise snacks outside of the chip aisle. Rhythm Superfood’s new Carrot Sticks, for instance, would do well near the produce section; jerky can be placed near the nutrition bars.

Like other categories in natural, special diets such as vegan, gluten free, paleo and increasingly keto continue to cleave snacking into subcategories, allowing customers to easily find the products that fit within their specific eating patterns. For Wian van Blommestein, owner of Ayoba-Yo, a meat snack company specializing in South African-style jerky called biltong, wooing consumers who follow popular special diets is a chief way to get them to learn about and enjoy his product. “Part of our messaging is that we use very few, clean ingredients and use an air-dried process,” says van Blommestein. “That means no sugar, which markets toward diet trends like paleo, keto and Whole30. Instead of going after flavors like teriyaki and BBQ, we try to stick to clean ingredients, and rely on the flavor of the beef to speak.”

While old-school snacks were composed primarily of wheat, corn, potato or soy, next-gen products incorporate value-added ingredients such as cassava, carrots, heirloom grains and grass-fed, humanely raised meats to serve modern snackers’ rising concerns, which include clean labels, calories that count and boosted protein, vitamins or minerals. “Snacks are definitely moving from potato chip snacking into more nutritional and specialty snacks,” says Jensen. “Brands are getting super creative about their bases: instead of corn, we’re seeing tortilla chips made from beans like lentils, favas and white beans.”

Oils, seeds, nuts and roots are also cropping up in novel formats in the snacking aisle (such as puffed lotus seeds!), transforming a stroll for snacks into one of delight, adventure and discovery. 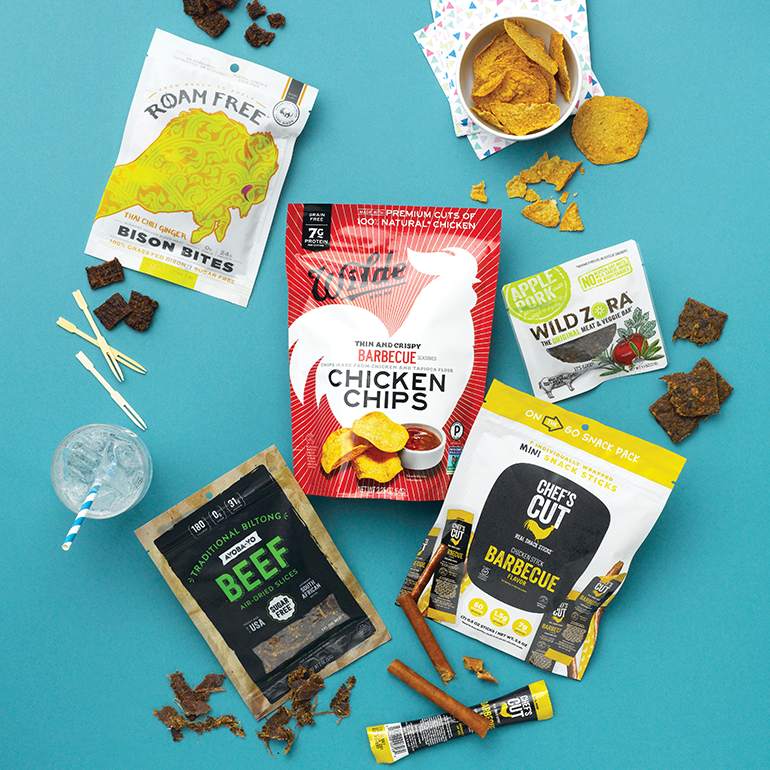 Roam Free Bison Bites Thai Chili Ginger
This brand is as vertically integrated as it gets. The founders own a bison ranch in Western Montana, where bison happily eat grass their entire lives. These savory-sweet bites feature powerful organic spices such as coriander, cardamom, ginger, fennel and more. Check out the nutrition facts panel—no sugar is added, either. SRP: $9.99

Wilde Barbecue Chicken Chips
Certified Paleo, this nosh is a category first and expands meaty snacks into the chip. Wilde uses Global Animal Partnership Step 2 chicken, which means chickens have items such as straw bales added to their barns for pecking. Tapioca flour, coconut oil and spices give these chips bulk and flavor. They come in at 7 grams of protein per serving. SRP: $4.99

Wild Zora Apple Pork
This meat bar is a perfect way to give lunches a protein boost. Made with a paleo-friendly blend of antibiotic-free pork and organic fruits and vegetables including kale, dates, apple, apricots and thyme, each 130-calorie bar contains 7 grams of protein and 2 grams of fiber. It’s also Whole30 Approved, making it a solid choice for those who eschew dairy, grains and soy. SRP: $2.99

Airy, crunchy snacks almost seem to melt in the mouth.

Lotus Pops Himalayan Pink Salt
While roasted lotus seeds are a relatively rare ingredient in the United States, they are a
“pop”-ular snack in India, where they are often found roasted in ghee and spiced with chili powder or masala. This new company introduces lotus pops to Americans by offering them in palatable flavors such as simple Himalayan 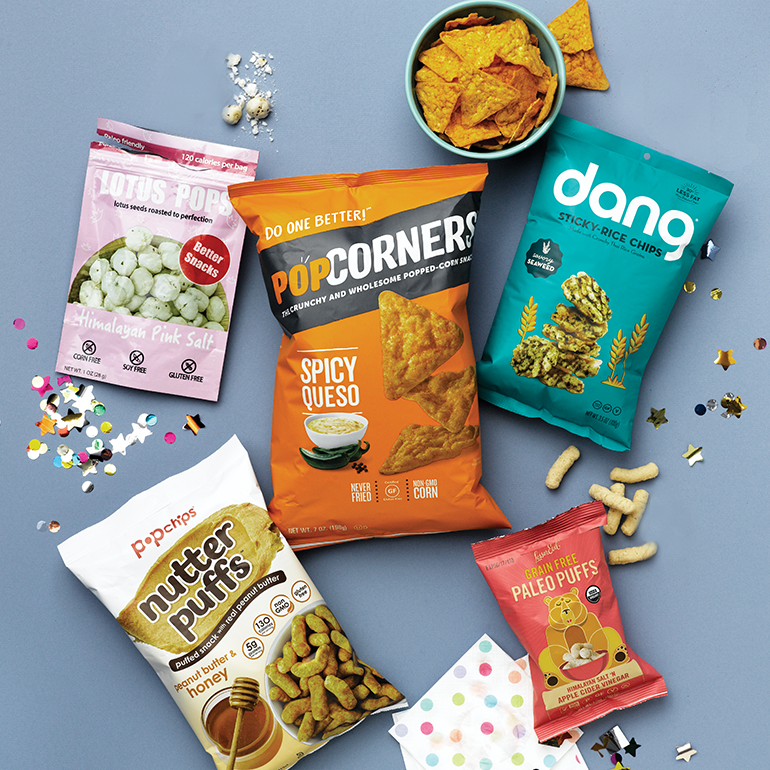 Popcorners Spicy Queso
Non-GMO puffed corn in the shape of a tortilla chip? We like! This mindful brand sources corn from 59 family farmers based in Nebraska to make their new Spicy Queso chip. Real cheddar cheese is spiked with red and black peppercorns to coat these bright orange triangles well. SRP: $3.29

Rhythm Superfoods Organic Carrot Sticks Ranch
It’s not exactly a chip, but these new USDA Organic carrot sticks from Rhythm Superfoods are salty, oniony—and we ate the whole bag in one sitting (whoops!). Not that we feel bad, because these carrots are dried 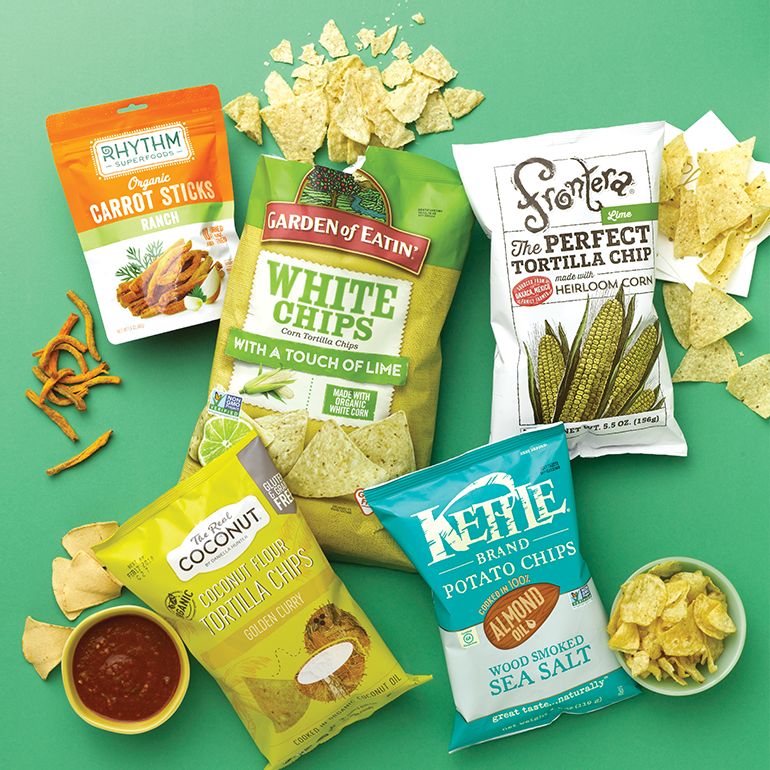 instead of fried, vegan and contain a ton of vitamin A and potassium. Here, carrots are topped with vinegar powder, tomato powder, parsley, black pepper and more. SRP: $3.99

Garden of Eatin’ White Chips With A Touch of Lime
A classic, delicate chip infused with a powerful burst of spices, salt and, yes, even sugar. Garden of Eatin’ makes this chip with organic white corn, a combination of oils including sunflower and safflower, and seasonings such as salt, evaporated cane sugar and orange peel. SRP: $3.99-$4.49

Frontera The Perfect Tortilla Chip made with Heirloom Corn Lime
The Mexican food experts at Frontera may have mastered the tortilla chip. Rather than use conventional, U.S.-grown corn, Frontera sources indigenous Masienda heirloom maize from small family farms in Mexico to obtain the most authentic flavor. A touch of sea salt and trace of lime adds a salty, citrusy flavor. SRP: $3.99

The Real Coconut Coconut Flour Tortilla Chips Golden Curry
Full disclaimer: The texture of these grain-free coconut-based chips is not identical to a tortilla flour chip. And it shouldn’t be! These USDA Organic chips are primarily made with coconut flour, cassava starch and coconut oil, which lend a crunchier texture and firmer chip—perfect for supporting a healthy amount of guacamole. SRP: $4.49

Kettle Cooked in 100% Almond Oil Wood Smoked Sea Salt
Kettle has always pushed the boundary to make chips as flavorful and exciting as possible. Now, Kettle experiments with different oils such as 100 percent almond oil to fry perfectly sliced potatoes. A dusting of woodsy flavors such as natural hickory smoke, smoked sea salt and garlic powder make this snack one to write home about. SRP: $3.69

The movie snack staple cleans up with heirloom ingredients and no chemical flavors. 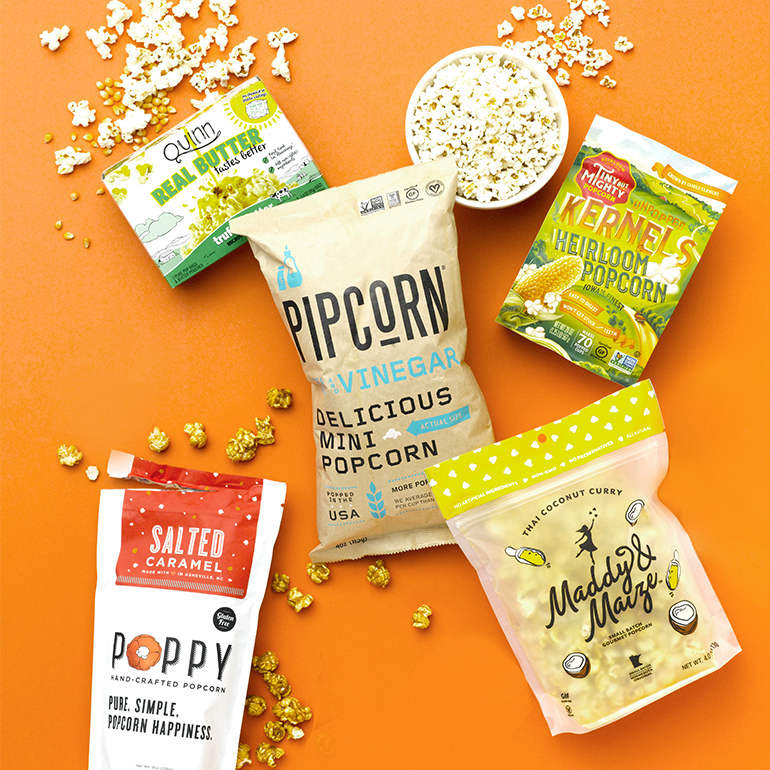 Pipcorn Sea Salt & Vinegar
Pipcorn says that when these smaller-size kernels are popped, the tough outer shell breaks open, reducing the likelihood that popcorn skins will get stuck in your teeth. Itty-bitty kernels bring novelty to the snack aisle, especially when they’re popped in olive oil, and sprinkled with sea salt and organic vinegar powder. SRP: $5.00

Quinn Snacks Real Butter Tastes Better Truffle Butter
Quinn has long been revered in the natural products industry for retooling classic microwave popcorn into a healthy alternative—one with none of the dangerous chemicals (such as diacetyl) found in conventional popcorn. This truffle oil-infused product features grass-fed ghee. SRP: $3.79-$3.99

Tiny But Mighty Popcorn Unpopped Kernels
Teensy heirloom kernels primed for poppin’. The particular strain of small popcorn used in Tiny But Mighty was discovered by the founder Richard Kelty’s great, great, great grandfather in the 1850s. Decades later, Kelty salvaged the heirloom seeds and started planting them in Iowa, developing a supply chain that can support Tiny But Mighty. SRP: $5.99

Meals and mixes take aim at convenience and health
Mar 27, 2018