Plant-based startup brings the taste and omega fats of salmon to market, leaves the fish in the ocean 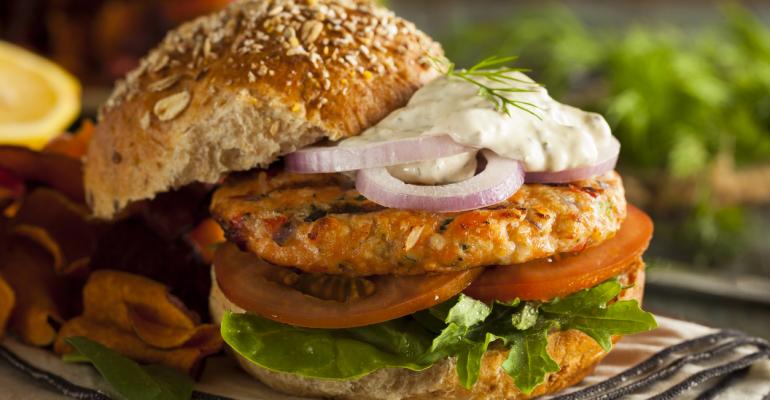 Terramino Foods made headlines over the summer when it received $4.25 million in seed funding for its high-protein plant-based line of foods that rival not only the taste, but the nutritional benefits of salmon—and, eventually, other types of meat and seafood.

True Ventures and the Collaborative Fund led the funding round, which the company is using to expand its team and product development. The protein comes from sustainably grown fungi that also fuels the taste, texture and nutrition of seafood and meat. Terramino says its production uses significantly less energy and fewer resources than conventional meat does. Co-founders Kimberlie Le and Joshua Nixon developed their prototype at the Alternative Meat Lab at UC Berkeley's Sutardja Center for Entrepreneurship and Technology. Their first product is a “salmon burger” that they say looks, smells and tastes like salmon—and has the omega-3 fatty acids and digestible protein that salmon is touted for.

We asked Le a few questions about Terramino, their plans and what they’re bringing to market.

How long did it take to develop the prototype?

We are still in the product development phase right now. We have made a few seafood and a few meat products to date. Initial prototypes of our salmon burger took a few months — this includes growing the fungi, which we do in-house, and then incorporating natural flavors and ingredients to make the products have the same texture, taste and nutrition of seafood.

What kind of fungi is involved here?

Right now we are focusing on creating products with a fungi that is commonly known as Koji, which is an ancient species already consumed in many foods like soy sauce, sake, and miso soup. Our fungi work well over a diverse product line we are currently developing—both seafood and meat.

Fungi is not typically particularly high in protein. Where does the protein in Terramino come from, as well as the omega-3s?

While some fungi don’t have high protein content, our fungi are actually higher in protein content than many meat and seafood products. In terms of omega-3s, we use microalgae, which is sustainably farmed to impart flavor as well as the omega-3s. We have the same healthy serving of omegas in our products as those in salmon, and we try to match the nutritional profile of fish and meat as close as possible—but notably with less fat and no cholesterol.

What kinds of events are you bringing Terramino to showcase products? Who is your target consumer?

We want to help meat eaters and flexitarians have a great-tasting, nutritious, and well-textured experience with eating meat that doesn’t come from an animal. It’s difficult to eat plant-based and many people have had sub-optimal experiences with alternative proteins and we want to help with this challenge. In the short term, we are showcasing our products at private-invite-only tasting dinners. We are also putting out a lot of content and hosting events about food in the next few months. We encourage people to get involved in the conversation around making an impact with food, and learning more about the food system and where their food comes from.

We believe that food should be personal and we also want to bring transparency to our broken food system. Being able to grow our ingredients and bring products to people directly is our goal.

Do you have any retailers committed or in discussions at this point?

We are pursuing more of a direct-to-consumer model at the moment, so retailers aren’t on our radar right now.

Do you plan to merchandise within the fish set, or alongside other plant-based products, and to label it as plant-based or vegan?

Our products are vegan by virtue of the fact that they are animal-free, but the experience in which the products are delivered to consumers is also very important—we want our products to be for meat eaters and plant-lovers alike.

We encourage people to sign up for our mailing list at terramino.com if they want to try our products. We will be doing exclusive tasting dinners in the upcoming months in various cities.