Is there room in the plant-based future for old-school meat alternatives? 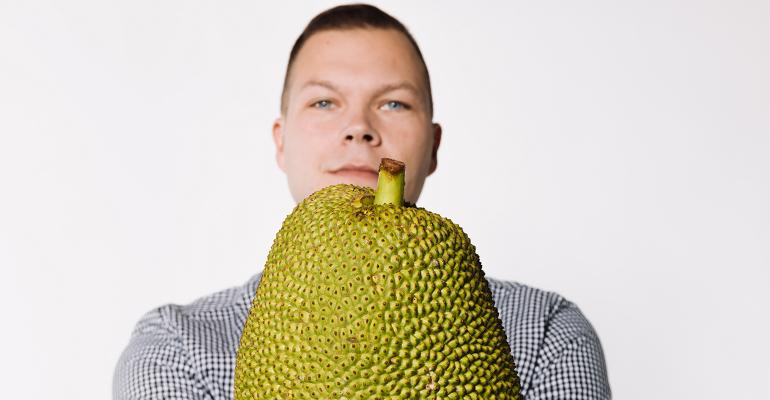 Dan Staackmann of Upton's Naturals shows off a jackfruit.
A conversation about the future of veganism with Dan Staackmann, owner and president of the super-hip meat alternative brand Upton’s Naturals.

Founded in 2006, Upton’s Naturals is perhaps the coolest legacy vegan protein alternative in stores today. Whether it's the mustached, hipster-friendly mascot “Upton” on the package, or the company's stalwart commitment to crafting perfectly seasoned seitan and jackfruit products, Upton’s represents how a company using old-school ingredients can continue to innovate in an increasingly food-tech landscape.

Here, we chat with Dan Staackmann, owner and president, about plant-based protein merchandising, cultured meat and the future of the plant-based movement.

Upton’s Natural’s core products feature seitan, which is made with vital wheat gluten. What inspired you to start a company highlighting this ingredient?

Dan Staackmann: I’m a vegan of over 25 years, and seitan was always a favorite food of mine. When I started the company in 2006 there was just one national seitan brand and no one doing it locally. It seemed like a good opportunity that there was room for in the market. I chose not to do tempeh and tofu because they are way more complicated to make, and there are so many regional producers of those protein alternatives.

As gluten-free eating rose to popularity, did your business suffer? Were people shying away from vital wheat gluten?

DS: You know, gluten-free popularity didn't seem to affect us as much, possibly because we were a smaller company. Our sales continued to grow quite a bit each year. So maybe we’re not the best to answer a question like that. For us, things continued to grow and the more mainstreaming of veganism seemed to be happening at the same time.

Who are your core consumers?

DS: Less than half are vegan. That’s based off social media posts, consumer events and in-store demos that we have done. It doesn’t seem like we’re 70 percent die-hard vegans and then just 30 part-time vegetarians. It really seems like there are just more and more people trying to reduce the amount of meat in their diets. We think a lot of our customers eat vegan most of the time, and then once in a while they have a steak.

On the one hand, you have all this investment money flooding into food-tech companies working to create identical meat analogs or cultured meat. And then on the opposite side of the spectrum you have brands like Upton’s who use old-school ingredients—tofu, seitan and jackfruit to craft meat replacements using artisanal techniques. Is there room in the marketplace for both methods?

DS: I definitely think there’s room for both methods, and they definitely appeal to different consumers. Personally, I’m not as interested in the high-tech approach. I don’t think I’ll ever be a consumer of lab-grown meat. There are definitely people out there that get excited about that. As consumers are drawn to a more vegan diet, they’ll start to explore other alternatives such as seitan. All those big investments and food-tech companies are certainly helping the entire vegan category.

Where do you think meat alternatives should be merchandised—next to the beef, chicken and pork, or in the produce or dairy aisle?

DS: It’s tricky, right? There’s been a lot of debate in the industry—is integration better than having the subset somewhere else like in dairy or produce? You would think, yes, if they are in the meat case, maybe you’re going to find that eaters of meat can make decisions to choose vegan protein easier. But consumers of meat alternatives have been pushed into those dairy and produce areas for so long to find vegan products, I wonder if you’re going to lose out on those people. As a longtime vegan, I don’t enjoy going into the meat department to find things. I’m very curious to see what’s going to happen in that regard.

What’s the solution to wean Americans off meat?

DS: What a great question. It seems like [plant-based eating] should be an easy decision for people to make. I just don’t see any reason for anyone in 2017 to say “veganism is ridiculous, why would I do that?” How many studies do there need to be that prove a vegan diet is healthier and better for the environment? Even setting aside the animal rights issues, do you not care about the environment and your own health?

There are so many alternatives right now that make it easy to make the [plant-based] transition. I don’t think meat alternatives are the sole answer. I don’t recommend that anyone eat seitan seven days a week. When I went vegan at 15, it opened my eyes to all the different kinds of traditionally vegan, delicious cuisines like Ethiopian and Indian that are out there. There are so many choices.

Is jackfruit the next hot clean-meat alternative?
Mar 11, 2016