So he decided to create a new kind of digital market where the two could meet without the interference and markup of a distributor. The digital market that the Denver entrepreneur created is called ToMarket.

And he’s bringing ToMarket to market right in the middle of the COVID-19 pandemic as the restaurant channel collapses and the entire industrial food system is exposed as more rickety than most consumers ever dreamed.

A digital market is still a market, and an even better market at the moment with more people than ever cooking from home and more concerned than ever about what they are cooking. The tools designed for chefs to produce local farm products are easily accessible to consumers now. Shoppers can go to ToMarket.farm, shop local farms, buy online and arrange to pick up their food. ToMarket launched in early May in the Denver area, with farms already online in Austin and Portland. Moosman calls it “more E-Harmony than E-bay” as a platform to foster as much connection as commerce.

We talked to Moosman about what it means to disrupt a market in the middle of epic scale disruption and how people thinking differently about food is a perfect starting place for buying that food in a completely different way.

New Hope Network: What have farmers taught you about cooking? 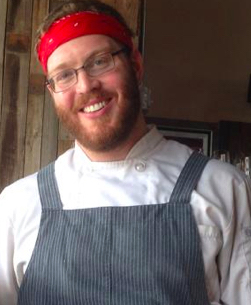 Dave Moosman: To get out of the way. I've worked on farms and purveyors of various products and cooked with a lot of people's really fantastic product. The best wines don't need spritzers, the best meats just need salt, pepper and maybe a little bit of fire. The best vegetables need a little bit of acid and salt. And so, what farmers and the best purveyors have taught me about cooking it's just to get out of the way.

Can people at home learn that?

The easiest way to make things taste good is to buy things that already taste good. What we’re doing is cutting down out all the work to find the best-tasting, easiest-to-buy, local vegetables.

Farm-to-table is a sort of buzz phrase right now, but how would you describe the most typical connection between a chef and a farmer?

I would say, it's tenuous at best. Nobody has time and everybody wants this idea of a relationship, and from all the farmers and all the chefs we've talked to the only person that's worse at picking up a phone than a farmer is a chef. We tell chefs the opposite. The idea is that farmers and chefs have their hands literally in their food or in the dirt. They’re cooking. They’re planting. They're busy. And so there's this idea of a relationship, and we want to give the tools to people to create an actual relationship.

The restaurant channel has imploded for farmers. What is your company doing to help farmers right now?

The exact same thing we set out to do. Farmers need to connect with their buyers. When it was chefs, it was a phone call or texting them, but how do you know what numbers to text or numbers to call if you're trying to get hold of thousands or hundreds more consumers. So, we want to do is take the same tools that connected them with their buyers and wholesale buyers and insert consumers with more efficiency and simple integrations.

How are you spreading the word to these consumers who’ve never tried buying straight from a farm?

We've seen a number of farms that have gone viral individually. And so what we're trying to do is make the whole community go viral. A big problem is that people don't know how to find what it is they're looking for. That's the main problem whether you're a chef or a consumer. So we're getting the word out there that the easiest way to find out who has whatever it is that you’re looking for is on ToMarket.

We’re doing that through NPR and some of our local networks. We're offering anybody furloughed from their jobs in this crisis, especially in the restaurant industry, 20% off of their bill to market well wants to make sure that people are fed. At the end of the day, that's the goal with this initiative is to No. 1 get people fed, No. 2 keep producers producing, and No. 3 get them connected.

Will the relationship between farmers and restaurants be changed long term by the pandemic?

Do I think it will? Yes. Do I know what it will look like? No. That's what we want to be here for. We already have some restaurants getting in touch with us, trying to get in touch with more local farmers, but those farmers have shifted gears and I don't know what will shift them back. This is great for our local farming community that people now don't want to be going to the grocery store and are sometimes literally fighting for food. We have the ability to know what's out there so that you can go to a small farm and pick up exactly what you've ordered.

A lot of people think there could be a reset in the way people think about the food system. Do you think this new regard for food can be permanent?

We want to sell out every farm. There are lots of large farms and small farms that are doing very well right now selling to grocery stores. And there are a lot of people that need to cook at home. There are also a lot of people that can't afford to do so or don't have the skills or knowledge to do so. And so, we want to be able to bridge the gap of who's able to do what. We can’t really help with the educational aspect, but we can help with being able to find local food that you can afford. So, will this help people who want to cook at home? Absolutely. We want to be there to help get food where it needs to go.

So what does it feel like to bringing disruption into a market that’s already more disrupted than it’s ever been?

Everything is equal parts terrifying and exciting. We never wanted to take a time when people are dying to be opportunistic, but we want to help. And there are people who need help. And there are people who need food. And so we want to be here to help them find it and help the producers get it out the door. There’s a lot of talk about disruption. Look at the large industrial meat processors. They've been running unsustainably, both in their labor practices and in their production, and now they got shut down. We think that we can really help centralize, and consolidate local food supplies. We want to do that first by opening up the communication.