What’s in your milk? Choose organic for the cleanest milk, says new study 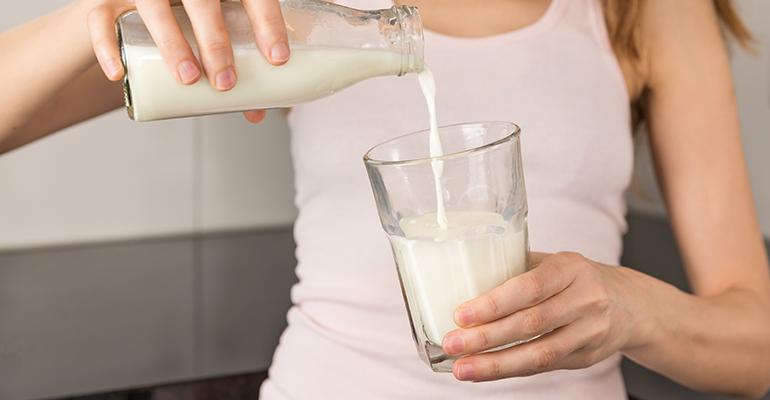 Milk is an important part of the human diet. It provides protein, fat, calcium and vitamin D, and for the youngest members of our population it is especially critical as a main source of many nutrients. But not all milk is created equal.

For nearly 15 years, studies have repeatedly shown that organic milk has a healthier nutritional profile. Organic milk contains more of the good omega 3 fatty acids, more antioxidants and a higher nutrient mineral content than conventional milk. Dairy cows under organic management eat more grass than those under conventional management and that difference in their diet results in more nutrient-rich milk.

Now a study conducted by researchers at Emory University, in collaboration with The Organic Center, found that a majority of samples of conventional retail milk tested positive for residues of antibiotics – two of which are banned from dairy production -- and currently used controversial pesticides. Organic milk showed no such contaminants. Residues of growth hormones in conventional milk were 20 times higher than in organic. The results of this important study were published online on June 26 by the peer-reviewed public health journal Public Health Nutrition.

Highlights of the findings

“This study is especially exciting because the researchers developed methods that are more sensitive than past analyses, including testing methods that have been used by the Food and Drug Administration (FDA); also, the study measured levels of chemicals that were previously unreported. These new methods give us a true picture of the presence or absence of residues in milk. The methodology was proven and solid, and put systems in place to control for results that would inaccurately indicate the presence or absence of the residues [false positives and false negatives]. The statistical significance was so clear and decisive that it gives us confidence that what we found in the study would also be the results of a larger sampling,” said Dr. Jessica Shade, Director of Science Programs for The Organic Center.

“Milk is a great source of protein and important vitamins and minerals, and we want our children and our families to drink milk. But not all milk is created equal, as this study demonstrates. This study finds that the presence of antibiotics and pesticides in conventional milk is much more prevalent and pervasive than previously thought–and that organic milk doesn’t contain any of these contaminants. We hope this study will let people know that the choice is out there for good clean organic,” said Shade.

A nationwide sample of the milk we’re drinking

To conduct the study, researchers out of Emory University tested for residues of currently used pesticides and antibiotics in U.S. milk purchased directly from store shelves, comparing conventional milk (35 samples across 18 brands) to organic milk (34 samples across 10 brands).

The milk samples were collected in August 2015 from each of nine regions: California, Great Lakes, Midwest, New England, New York, Northwest, Rocky Mountain, Southeast and Southwest. In each region, eight half-gallon milk cartons were purchased from one or more retail stores. These included six cartons of 2% milk, the type most commonly drank by American children, three of which were labeled as different USDA-certified organic brands and three labeled as different conventional brands. Two samples of whole milk, one certified organic and one conventional, were also obtained. Flavored and specialty milks were excluded. A total of 69 samples were collected.

The study’s findings detected residues of antibiotics and pesticides – in one case above the federally allowed limit for antibiotics -- in the conventional samples of milk, and no such residues in organic milk. Residues of growth hormones in conventional milk were found to be 20 times higher than in organic.

Importantly, residues of sulfamethazine were found in 37% of the conventional samples, and sulfathiazole in 26%. The use of both of these antibiotics for dairy cows has long been banned by the FDA due to concerns about the impact of sulfa drugs on human health. When cows are treated with sulfa drugs, residues of the drug show up in milk, and exposure to them can lead to health problems in humans. The biggest health concern is a life-threatening allergic reaction (acute hypersensitivity). About 2% of the general population is severely allergic to sulfa drugs. Outside of allergic reactions, there are many adverse side effects connected to the sulfonamide class of antibiotics.

One of the conventional samples had residue levels of amoxicillin over the FDA limit.

The published study noted that testing for amoxicillin was not done as part of an FDA study done in 2015, and that the findings of this study indicate that the oversight of the safety of our milk supply needs to be bolstered.   “While the results of the previous FDA study demonstrated that, with a few exceptions, antibiotic residue levels were within federal safety limits, our finding that multiple samples exceeded them suggests that further strengthening of the monitoring system is needed to ensure the continued safety of the milk supply,” said the published study.

While there is no federal limit set for cow-derived hormones in milk, this study found levels of the bovine growth hormone (bGH) to be 20 times higher in conventional milk than organic. The study said that since growth hormones are produced naturally by dairy cattle, some level of bGH can be expected in all milk samples. The dramatically higher residues found in conventional milk “suggests that the difference reflects the use of synthetic growth hormones” in conventional dairy, according to the study. Low-level hormones identified in organic milk fall in line with a bovine’s natural biological cycle when lactating.

The results found no residues of current-use pesticides in any of the organic milk samples, but residues in up to 60% of the conventional samples.

“While none of the organic milk samples had detectable levels of current-use pesticides, most of the conventional samples did,” said the study.

Of note is that conventional milk tested positive for residues of the dangerous neurotoxin chlorpyrifos in 59%of the samples.

Chlorpyrifos is associated with developmental issues in babies and children. Restrictions were imposed by the Environmental Protection Agency on the use of chlorpyrifos in residential settings in 2000. The pesticide was ordered by a federal court to be banned in agriculture in 2018, but this ban has been appealed by the current administration.

California recently announced plans to ban the pesticide, and several other states have started to take action to crack down on the use of chlorpyrifos due to health concerns. With an estimated 6 million pounds of the chemical used annually on 10 million acres, chlorpyrifos has been referred to as the most commonly used conventional insecticide in the country.

The importance of organic dairy

People enjoy dairy in all places and in all situations, whether it’s a bowl of cereal and milk or yogurt and fruit at our breakfast table, cream with our coffee at the local coffee shop or cheese on our pizza at our favorite restaurant. Organic dairy is the No. 2 selling category in the U.S. organic industry, with products such as organic cheese, organic butter, organic sour cream all seeing greater sales as consumers seek out higher quality dairy products. And providing for all that organic dairy are more than 2,500 organic dairy farms across the nation.

What does organic dairy mean? Organic dairy farmers are required to adhere to the federal organic standards that ensure organic dairy is produced sustainably, with the health of the cows and the health of the consumers in mind. While there are a number of important distinctions between organic and conventional dairy, the main differences are related to what the cows eat, where they spend their time, and how they are treated if/when they get sick.

Organic dairy means no use of antibiotics, synthetic growth hormones, GMO’s or conventional pesticides. In organic dairy the health and natural behavior of cows are prioritized with holistic and preventative care practices as a primary management strategy. Organic cows are pasture-raised and grazed throughout the grazing season, and all livestock are fed an organic diet.

The significant findings of this study break new ground, and could be a guide to consumers wanting to choose the healthiest and cleanest milk for their families.

“There needs to be more research conducted to expand this important study and to test more samples across the U.S.,” said The Organic Center’s Shade. “But in the meantime, in order to get the important nutrients from dairy, the best choice is organic dairy.”

“To our knowledge, this is the first study to compare levels of pesticide in the U.S. milk supply by production method (conventional vs organic). It is also the first in a decade to measure antibiotic and hormone levels and compare them by milk production type,” noted the published study.

The study concluded: “Residues of current-use pesticides and antibiotics appear to be common in conventional but not organic milk sold through retails stores across the USA…Similarly, growth hormone levels and IGF-1 [insulin-like growth factor 1] were several times higher in conventional milk, which suggests that the difference reflects the use of synthetic growth hormones…the present study’s findings suggest that choosing to consume milk produced organically would minimize exposure [to antibiotics, growth hormones and pesticides] and any possible associated risks.”

*Legacy pesticides are those that have been banned because of their known harmful consequences, yet remain persistent, at very low background levels in the environment. The legacy pesticides tested in this study were hexachlorobenzene, ppDDT, and a breakdown component of DDT, the metabolite ppDDE. All were detected in nearly all of the milk samples, both conventional and organic. However, levels were significantly greater in conventional samples with approximately 4 times more hexachlorohenzene and 1.5 times more of ppDDE, the DDT metabolite.

“Traces of these legacy pesticides persistently show up in any test for residues, so we were not surprised that they were detectable in both organic and conventional milk,” said Shade. “Unfortunately there is no true safe harbor from these contaminants, but it was encouraging to see them at such low levels, and interesting to find that organic practices even reduced the residual levels of these banned pesticides in milk.”