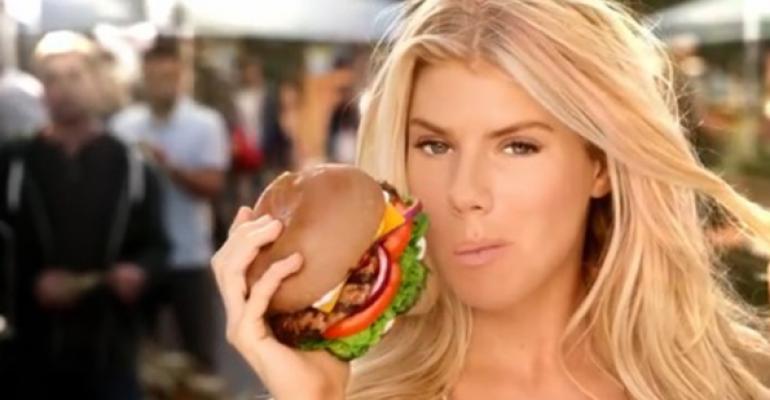 Each week, NBJ Senior Editor Rick Polito examines a food/nutrition commercial for accuracy and idiocy. This week, Carl&#39;s Jr. takes an unnatural approach to natural. See an a spot ripe for a takedown? Email Polito at [email protected]

I never thought it possible that a hamburger would be the least icky thing in a Carl’s Jr. commercial, but in the Super Bowl spot for the chain's new All Natural Burger, it's also the only "natural" thing on the screen. It's certainly not model Charlotte McKinney.

In the ad, the ridiculously curved Guess model parades Lady Godiva-style through a farmers market (because when you think farmers market you think Carls Jr., right?) Her stroll past a squad of creepy leeringmen takes her by the obligatory pair of cantaloupes and a tomato with remarkable glutes before revealing that she was clothed, though barely, the entire time.

This is hilarious stuff, if you're 12, or you missed the first Austin Powers film.

Exposed as not quite nude, she bites into the chain’s All-Natural Burger and we learn that that the beef was raised without antibiotics, steroids or “added hormones.” They don't say anthing about breast implants.

Because that makes the burger possibly the most, or only, natural thing on the screen. 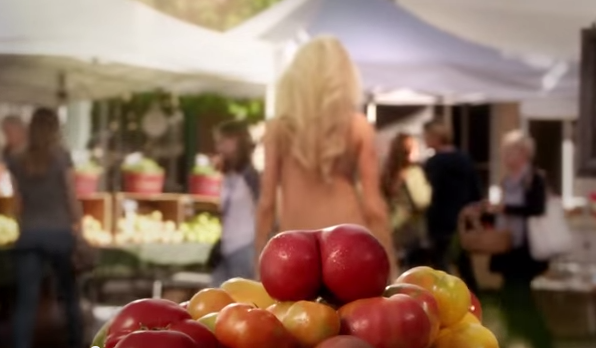 Some would say organic and natural food suffers a troubling lack of cool and that better nutrition and better-sourced food is presented too seriously. We like Bolthouse Farms’ Food Porn Index for playfully highlighting America’s obsession with unhealthy food, and celebrities like Jessica Alba with her Honest Co. products that add a dose of style to natural products. But it’s hard to imagine sophomoric sexism from Carl’s Jr. inspiring anybody to run out and research supply chain issues in the meat industry, or even think about healthy eating. Every viewer will know McKinney spit the burger into a trash can as soon as the camera stopped. Scoffing at models allegedly ingesting actual calories has already inspired #youdidnoteatthat Instagram feed with its 143,000 followers.

Carls. Jr. might deserve some credit for more conscious sourcing, but it should be noted that the ad got tweeted the same week McDonald’s announced a 21-percent drop in profits for the fourth quarter. It may be that going all natural, or “au natural” as the McKinney spot is titled, is barely a choice anymore. Fast food is getting roughed up hard by Chipotle and the whole fast casual category, and we can't imagine the All Natural Burger as any kind of credible catch-up strategy — especially  not when Carl's Jr. puts it on the menu at $4.69. People like me would be infinitely more confident in the natural claims, and likely better taste, of Smashburger’s $4.99 Classic Smash. The new Carl's Jr. offering also implies that the rest of the menu lacks natural ingredients.