Recent
Latest
4 tips to get ahead of chemical concerns in packaging
May 20, 2022
7 CBD favorites in the increasingly popular gummies format
May 20, 2022
Mission MightyMe helps parents introduce allergens to babies
May 20, 2022
UNFI's Eric Dorne to step down as chief operating officer
May 20, 2022
Trending
Whole Foods' honors 30 companies with 10th annual Supplier Awards
May 18, 2022
Sponsored Content
The rise of sustainable business – eGuide
Sponsored Content
Getting ready for 2023: Trends for brands to consider
May 17, 2022
Sponsored Content
Unboxed: 7 plant-forward ice creams to stock this summer
May 10, 2022
IdeaXchange
brought to you by 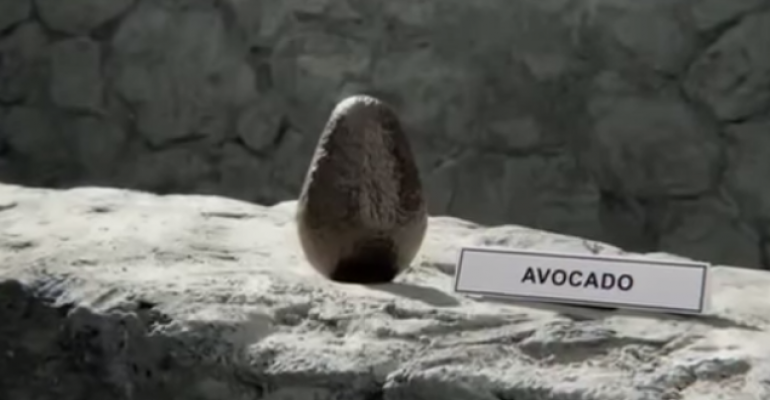 Each week, NBJ Senior Editor Rick Polito examines a food/nutrition commercial for accuracy and idiocy. This week: Does that avocado look familiar? See a spot ripe for a takedown? Email [email protected]

If you are what you eat, then we are all globetrotters. I’ve eaten apples from Peru and cheese from France, olive oil from Italy, but throwing that adage aside, it’s a bit depressing how well-traveled the produce section is.

Because I am not what I eat, my passport has an embarrassing number of blank pages. Does the Frankfurt airport even count as visiting Germany? But at least I am not going mushy in that scary drawer in the bottom of my fridge. I think that was broccoli at one point. Does broccoli have legs and a tail? Why is it looking at me like that?

All of these jet-setting fruits and vegetables leave me less than warm and fuzzy (that broccoli started growing fuzz when it hit puberty). Can anything be less local? So I am perplexed by the “Avocados From Mexico” commercial that the League of Mexican Avocado Growers, or whoever it is, paid $6 million to show during the Super Bowl.

For starters, do you care where your avocado came from? Are you looking for avocados with a Latin background, or are you afraid they are sneaking over the border and taking jobs from good American avocados? Does your guacamole have a green card?

I don’t imagine anybody getting worked up about avocado origins. This isn’t wine. Nobody is arguing the merits of a Oaxacan avocado over the Guadalajaran appellation. There is no Sonoma v. Napa debate here, at least not that I know of, yet.

“Waiter, tell me more about this avocado. Was it grown on a west-facing slope? What was the soil like? How did it score in Avocado Spectator? Is this avocado free range?”

If anything, we want our avocados grown closer, not farther. I have never questioned the heritage of my avocado, but I would prefer California to Mexico. Justifiably or not, I fear produce from south of the border carrying all manner of paraquat-like pesticides (a call-out to you boomer stoners out there). I also assume no locavores appreciated the spot. I can see them slinking away from dip bowl, head cast down in shame.

I have nothing against Mexican avocados. Some of my best avocados are Mexican. I laughed at the Super Bowl ad.

I didn’t recognize Jerry Rice or Doug Flutie because I don’t follow football. I haven’t watched the Super Bowl this decade. I did like that my local brewery was noticeably uncrowded Sunday afternoon, the first day of Stout Month. I watched the commercial on YouTube. So did 180,000 other people, last I checked.

The commercial depicts the “First Draft Ever” with countries and continents being assigned plants and animals by somebody who is probably supposed to be God, but might just be some guy in a bathrobe, while Rice, Flutie and a caveman offer commentary. The caveman looks familiar. He may have been at Stout Month. He looks like the opening-day type. As the commercial closes, Mexico gets the avocado. A strong pick, according to Rice and Flutie. The caveman was less articulate.

Now, can you picture the 114 million people who watched the Super Bowl rushing to their kitchen to check their avocado’s documentation?

Neither can I, but I am not well-traveled.  I will have to ask that New Zealander nectarine I saw at Whole Foods. He looks like a worldly fellow.